Topics
-The Holidays in and at SOE
-A Fire side reading of Why the Grump Hated Frostfell
-An interview with Game Masters Janice Bagley and Aaron Bisnett
-Customer Service, we talk about our roots.
-The Love Doctor joins us to answer some questions!
-Michigan and Louisiana Lose article
-EQOA – Discussion of the new zone and the difficulty in updating this PS2 title.
-An interview with Associate Game Designer for EverQuest Online Adventures Leah Ruben
-Pirates Constructible Strategy Game launches!
-Santug Klug stopped by to ask us what we wanted for Christmas
-TV/Movies
-What are you playing?
-Some Holiday Shout Outs!  Various SOE employees wish YOU a very Happy Holiday!

The show is available on iTunes as well as from the official SOE podcast site.

The show was recorded on December 4th and is a long one coming in just under one hour and twenty-seven minutes.

We are victims of our own success

Saturday night means instance night. Our planned target was Scarlet Monastery. This was our roster:

If you are familiar with Scarlet Monastery, you will note that we are a bit too wee to take on the whole thing. There are lead in quests that are required to open up quests within the instance that one needs to be level 34 to get. So we were not going to conquer all of Scarlet Monastery in one night.

However, Scarlet Monastery is nicely divided up into multiple instances. We all had a quest for the Library and we felt we could burn through the Graveyard easily enough. So those two sections were our targets.

Of course, we had to play in something of a new environment after the addon holocaust of WoW patch 2.0.1. While, as a group, we are pretty light in what we run, I am addicted to having Damage Meter running for our instances to help with the post-game analysis. (The addons I use tend towards the informational and statistical. Even Auctioneer is in that category because it lets me know what is valuable and what is trash.) Only minutes before show time I was grabbing the alpha version of the Cosmos package because it promised to have a working version. Because of this, throughout the evening, I had some pretty odd behavior in my UI. It did not hurt my play in combat, but I had to click “ignore” a lot between fights.

In the end, I got all the usual stats I grab every week. I just wish I had had another 30 minutes or so to mess around with Cosmos and turn stuff off before the start.

Scarlet Monastery is up by the Undercity. I had planted myself in the South Shore Inn the night before, but it is still quite a run to get to to the instance. Fortunately Skronk and Ula showed up early and were able to summon me to the meeting stone outside Scarlet Monastery. We then grabbed Earl and Bung as they freed up and began heading our way.

Before we ran into the Library, I used the last charges on my Halloween costume wand on our party, making the tall guy short and all of the short people tall. It was mildly confusing because Earl ended up as a pirate gnome that looked remarkably like Bung, so for a bit people kept thinking that Bung had run out to tank.

We started in the library as we had a quest to take care of in there, “Mythology of the Titans.” As an instance, the library is linear. You cannot get far off the track.

The mobs started off around our level and graduated to level 36 near the end. As these were all serious fights for us, we were careful with mob management. The only surprises we got were when, on a couple occasions, while I went forward in stealth to scout, somebody would absentmindedly follow along behind and end up pulling mobs by proximity. While this got us into a few fights prematurely, it did not end up getting anybody killed, so we were able to (I hope) learn a lesson without much pain.

The first boss was Houndmaster Loksey. We will have to go back and kill him for some future quests, but we decided to do him in this time for drops. You get three hounds with him, but they aren’t much of a hazard once Loksey is out of the way.

Loksey himself was somewhat stingy, only dropping the Dog Training Gloves, which nobody wanted, so they ended up disenchanted.

Then we began the crawl towards the second library boss. We managed to pick off patrols, pulling them way back to us when we could. Everything in the Library flees at low hit points, so a buffer zone around your fight is a good idea. I had crippling poison on my main weapon to slow down runners. In the end, on our inbound trip, we had no problem with runners bringing in adds.

The stationary mobs came in groups of two or three, with a single group of four at one point. They fell to us readily as we progressed, picking up the book “Mythology of the Titans” on our way to update our quests.

We also had another pit stop on the way to the last mob for a re-buff. Here is Bung giving himself a hot foot and some amazing floating books.

Bung on the candles 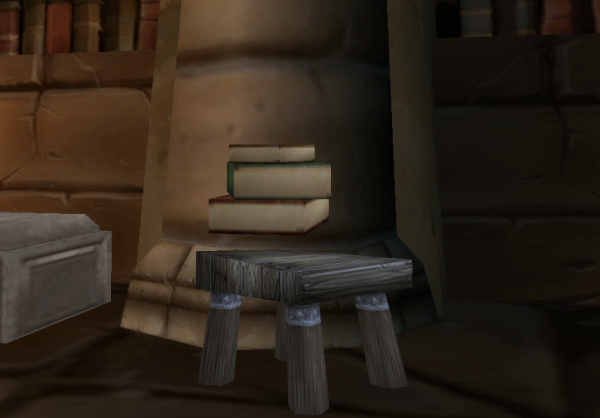 The must be books of magic

We fought our way down the corridors, finally arriving outside the room of Arcanist Doan.

Doan is something of a handful. While he is alone, he is a caster and does not hold back. He casts area effect spells, so the casters kept back while Earl, myself, and Mezzmon charged into the fight. I was doing quite a bit of damage I guess (I am the rogue, after all) so Doan kept hitting me with polymorph, turning me into a sheep. Fortunately the casters were attentive and dispelled that quickly each time. (No addon help required!)

While dispels and healing were required throughout the fight (I had to drop a potion and my health stone as well) in the end we all came through and Doan went down.

He was nice enough to drop the Hypnotic Blade. This has stats that endear it to casters, but it is also several points of dps better than my main dagger, so we rolled on it. Bung ended up with it.

While we were there we also picked up the Scarlet Key in a box in the back of Doan’s room, which will let us into other parts of Scarlet Monastery as we get to them, as well as a supply of his pills to soothe our aching backs.

This part of the run did not take us all that long. We began to head back. Skronk joked that if the place had respawned a lot we could always “tele-mort” out, get killed, ghost back to the instance, pick up our stuff, and move on to the next item on our agenda.

Unfortunately, as we headed bask towards the entrance, many mobs had respawned. We started fighting to work our way out, but got into a big scrap that ended up with another group respawning behind us. This lead to a runner getting away who brought in more mobs which quickly got out of hand. We all dashed about looking for a convenient place to die and wait for a ress. I found my spot. Does it look familiar?

An awkward place to die

However, Skronk chose the spot where the mobs spawned behind us, so they were standing right on top of him when he used his soul stone. He died again. So, in the end, we did “tele-mort” out of the library.

The Graveyard is actually the lowest level of the instances that make up Scarlet Monastery. This is where the level 29 groups of the listed “29-45” range can play. We were well powered for this zone and zipped through without much problem.

We only ran into two bosses in the instance. The three possible rare spawns were all missing, which means we are batting .000 on rare spawns so far.

Since we did not die, or even run into trouble, there isn’t much to write. I find that, generally, only our mistakes make interesting copy.

Interrogator Vishas was quick. While he does say some suggestive things in combat, he doesn’t put up much of a fight when it comes down to it. He did not drop anything of note. He can drop a reasonable dagger, but he was holding back, and all we got were some common brass knuckles.

The other boss we got was Bloodmage Thalnos at the bottom level of the crypt at the far end of the graveyard. He was a bit of a fight, but nothing like Doan, and we were rid of him quickly.

He was nice enough to drop the Orb of the Forgotten Seer, which Bung also won, giving him something new for each hand.

We hung around a bit more and played in the coffins, but we were pretty much done. Since we forgot to take a picture over Doan’s corpse, we took a group shot at the fountain in the graveyard. (I forgot to turn off the UI though! I must have been tired. You can see where we were on the mini map.) 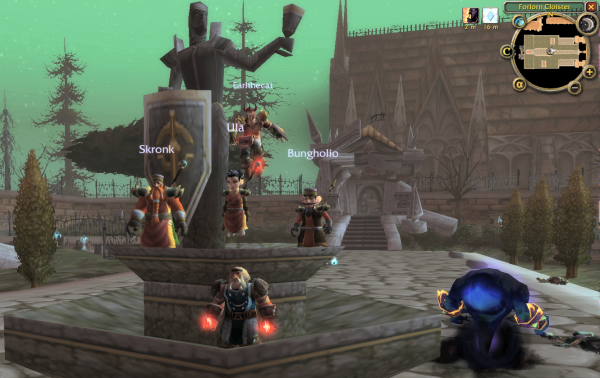 At the fountain in the open area 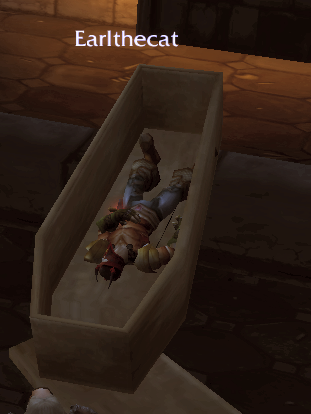 Earl practicing for the long sleep

Blintz tries it on for size

Then we all recalled to Ironforge, turned in our quest, and called it a night.

We need a couple levels to finish up all of Scarlet Monastery, that is true.

Our homework task for the week, or the subject of our off-night run, will be to get level 34 and run down the lead-in quest up in Desolace.

I also have the task of finding either an addon that records total kills (I want something like a trigger set I have in ZMud that grabs the name of each mob I kill, along with the damage it took to kill it, and the room in which it was slain) or figure out how to get Damage Meter to also record the number of kills. (Which would make it Kill Meter I suppose.) Does anybody know of such an addon for WoW? If we’re going to have statistics, we want as many as we can get!