I have not been keeping up with the five-person instance run log. While members were absent at various times during the holidays, we still managed to get four-person groups together each Thursday and Saturday for some action.

There were two more organized runs at the Library during which Houndmaster Loksey dropped only his Dog Training Gloves. To offset that, Arcanist Doan was kind enough to drop his Illusionary Rod two times running so that both Ula and Skronk are now equipped with it.

There were also two four-person runs at the Armory. I missed the first one, but the rest of the group worked out the strategy (in the blood of a wipe) for killing Herod The Scarlet Champion. Basically, patience and a couple more levels on each of us was what we needed. As stated before, when Herod shouts “Blades of Light,” the melee people need to run away and the casters need to stop any casting. Herod is motionless and immune to damage during his whirlwind attack, though any damage over time effect that hit him before his shout keeps on going.

So Ula, Earl, Skronk, and Bung killed slew him on the night of the 30th of December. (I was too beat from my daughter’s birthday party that day to stay up and play.)

Then on the night of the 4th of January, Skronk (37), Earl (37), Bung (37), and Blintz (36) ran through the armory and slew Herod on the first try. I was worried when, suddenly, after Herod went down, a herd of scarlet mobs ran into the room, but they were all non-elite and Bung slew the lot of them with some warlock AOE action. Here is how they spread out upon death, in what looks a bit like a cross:

And here we are over Herod. 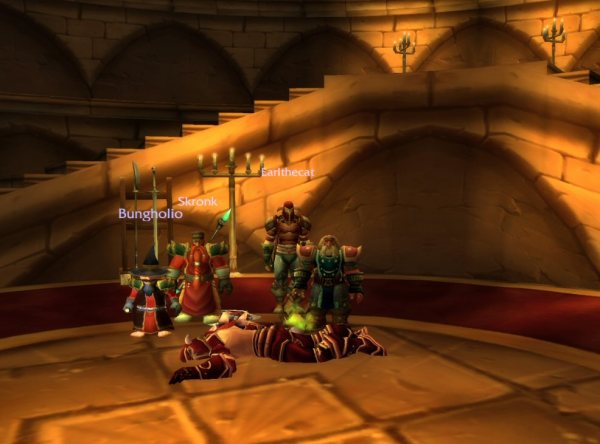 Both time Herod dropped the Raging Berserker’s Helm. We want to keep doing the Armory until we get Herod’s Shoulders for Earl. It is a short enough farming run that we can manage it on weeknights.

And now I am up to date and ready to report on the run we make tonight!

1 thought on “Scarlet Monastery – Rounds 3 through 7”