I just noticed that posts about fun in Nektropos Castle are up on MMOG Nation and Timesink.  So if you need more of a Nek Castle fix, you should take a look at their tales in the house of Everling.

Despite the history of six hour spawn camps in there  (Only six hours?  We camped stuff in EverQuest for days!) it is a pretty neat zone just from a design perspective.

But back to Blintz.  Tuesday night.  Again, with a little more free time, I decide to see if I use the trick of zoning in and out of Nektropos Castle until I get the two Billy spawns and the Swinelord all up at the same time.

I zoned in for the fist time.

I checked the chapel, the game room, and the stable.  All of the spawns I needed were up!  Go me!

Feeling that I am on a roll, I moved to exploit my fortune.

Following the quest instructions, first I slew Billy in the game room.  If you’ve done this quest, you recognize Billy here.

Then I headed to the chapel to smite the second Billy.  Down he went.  Again, same Billy, this time taking a nice proc off my imbued weapons. 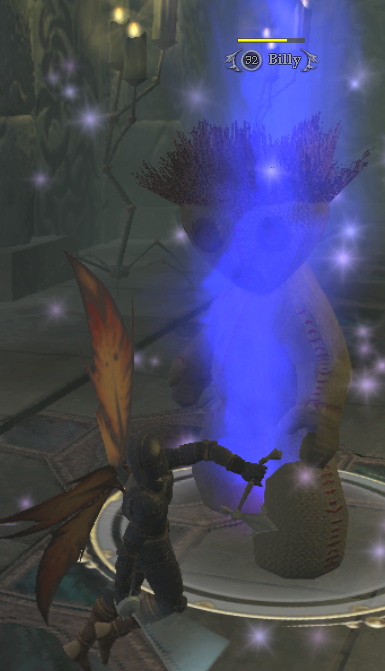 Here is a bigger picture of the fight in the chapel that gives a sense of the way Nek castle feels.

Then I was off to the library.  Fortunately, like access to other areas of the castle, once you have access to the library, you appear to have it for good , so Blintz appears to have his hand stamped for all of Nektropos Castle now.  In the library you read some of the writing of Maltus Everling that indicates you should head back to the courtyard.

Back down there I met the quest giver Billy in the center of the courtyard where he asked his famous line “Why do you keep killing me?”

What else are NPCs for?

I opted to give him the 5 gold to advance the quest rather than fight him, since the fight option was bugged forever.  It might be fixed, but I was not going to blow my good luck to find out.

So, 5 gold got me the update that sent me to the jailed froglock who in turn sent me back to the library.  By this point I no longer needed to bring up EQ2Map.  If somebody needs a guide for Nek Castle, drop me a note.

The next item on the list was 21 Nyth dolls, who live down in the basement.  I went through Everling’s bedroom, down the stairs, and found the Nyth dolls.  They look like Billy.

However, they are a bit smaller.  A fight scene gives the scale.

I had just cleared both rooms of them for a total of 11 of 21 when EQ2 locked up on me.

So much for my streak of good luck.

When I brought EQ2 back up, I was outside the castle.  I went back in, back through the castle, during which I passed by the library, which is how I know the lamia will continue to try to mug you as long as you are on that stage of the quest, and down to the basement again.

Down there the nyth dolls were all waiting for me again.  I suppose I did not have to wait for a respawn at least.  The Nyth puppet master was also there, so when I killed the whole lot, I also managed to advance one of the grey quests I picked up that required me to kill a few dolls and their controller.

That done, I headed back up to the courtyard, into the stable, and all I saw was a pig.  No Swinelord.

As it was, once again, getting late, I decided to camp outside the castle and pick up the quest again another night.  So you can expect at least one more post on the adventures of Blintz in Nektropos Castle.  I want a screen shot of Blintz as a dark elf when he gets the mask.

4 thoughts on “Billy, Dolls, and the Swinelord”