Founded in March 2005, back when alts were frowned upon in our main guild, Knights of the Cataclysm, it has seem some ups and downs since it was formed.  Back then if you left a guild all of your contributed status left with you, so the act of switching alts for mains and such with the other guild had the result of Shades getting as high as level 5 and dropping all the way back down to level 1 at one point.

After several guild status revamps in EQ2, we were finally able to make (and maintain) progress in levelling the guild up.  The guild was level 20 when two of the three remaining people in the guild ran off to play World of Warcraft for 10 months. (Our guild there is The Twilight Cadre.  Shades of Twilight was taken.)

While we were away, the one remaining EQ2 addict, Laniala, managed to grind enough status to get the guild up to level 27.

Now we have more space in the guild bank, access to a few more status-based housing locations, and we can create a guild cloak.

This is my suggestion for the cloak: 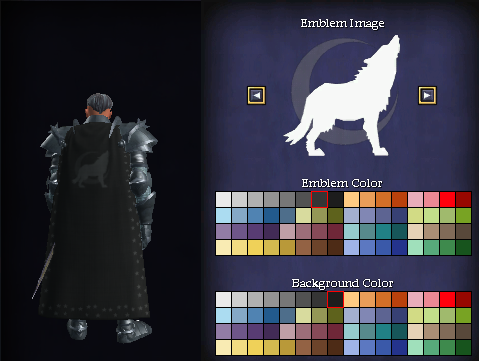 The guild itself is a descendant of our Toril MUD guild, also called Shades of Twilight.  The three most active members in the guild were also active in the Toril MUD guild.