The sirens at CCP are singing their song again.

CCP sent me an email on Saturday, tempting me back into space for five days free. 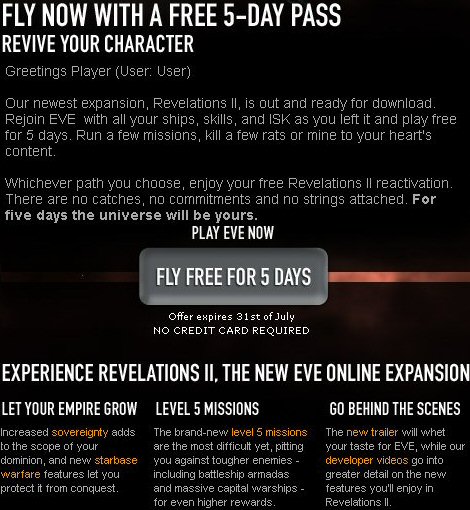 I figured I might as well take them up on the offer.  I’m not buying into the idea that there is an MMO slump of any sort, but I have been hacking and slashing for months on end, so a few days among the stars seemed like a nice change.

Of course, things started off as usual for me.  I logged in at peak time with the server population above 30K.  I was docked in Jita.  I tried to undock.

Not a long time.  Less than five minutes but more than two I would estimate.

Jita is a popular place.

But at least I had a goal in-game almost immediately!  Get the hell of Jita.

So I pulled up the map, picked a star one jump away, and went.

That is one thing about EVE, there is no lack of places to go.

The tutorial came up as I got myself in motion.  I read or heard somewhere that this was a new tutorial.  I felt I ought to try it, just to compare it to my experience with the past version.  But not now. I cancelled it and told it not to come back.  You can always start it up again from the configuration screen.

So there I was, again among the stars.  I have had my issues with EVE, but beautiful scenery has never been one of the.

My cormorant warped, cruised, jumped… the timeless cycle of travel in EVE Online.

Then I suddenly realized I had no skill training in progress. Minutes wasted!

The mantra of EVE Online: Always be training.

And the uncertainties started in again.  What skill should I train?  What do I need?  What would be useful sooner rather than later?  What is a false path, what is a true one?

I chose Shield Upgrades and started that working towards rank 3.  I might need that some day, right?  Fine, at least valuable training time would not be lost.

And then I thought about what to do next.

Run a mission or three I suppose.

There was even an agent available to me in system.  I headed to Roki Kaurinen at the Caldari Navy Assembly Plant.

I had not run any missions for this particular agent before.  Should I start now?

I am not even sure of the right protocol for running missions.  Should you stick with one agent until something changes?  Should you spread about and build faction with a series of agents?  Does it matter?  Should I just do my 16 runs as fast as possible to get the story line missions?

Well, the agent with whom I had built the most faction, Purkkoken Honuken, is based Jita, and I wasn’t going to go back there if I could avoid it.  Not at peak hour, anyway.

I dug in and ran a few missions for Roki.

The same missions I had run before.  In fact, in running six missions, I got two repeats, including two runs through “Worlds Collide.”

This isn’t exactly a step up from “kill ten rats.”  In fact, running things like “Avenge a Fallen Comrade” six times in a week’s worth of missions was one of the things that soured me a bit on EVE.

Oh well.  EVE is about the PvP, right?  I am a long way away from that still.

At least I hit that magic “16th mission” and got a story line mission.  And it was a tough one.  I had to run back for repairs twice during the mission and once for a reload because I left the hanger with my magazines nearly empty.

Faction up! Cash up! Fun up!

But once I was through with it, I was back to the same old missions.

Maybe I ought to just go back to hacking and slashing again.

I have some fun running the missions of course.  It is not complete tedium.  I just do not have any goals, and I am really a goal oriented person.