So I ordered a copy of EQuinox only to notice after the fact that they charged me sales tax!

Like, in California, periodicals that are published at least four times a year are totally exempt from sales tax!

That does it!  I am so totally going anti-SOE now!

Give me that bottle of Hateraide!

Okay, I am just being silly… er… sillier than usual.

But it is true.  No sales tax on said periodicals here in California.

I opened up a support ticket on this, which entailed a process considerably more complex than renewing my car registration on the DMV web site.

When you fare badly compared to the DMV, look out!

I twice ended up on Apache Tomcat 5.5.9 error pages twice.  That is, unfortunately, a rather successful outing on the Station.com Knowledge Base site in my experience.

I muddled through eventually.  Now we shall see if I get my $1.07 back.

I’m sure they will get back to me Soon™.

After a month long run of at least one of us going missing for the Saturday night play time, we at last all showed up and were ready to go.

We had been talking about the Great Barrow for some time.  We all had three quests for the Great Barrow, we were now securely in the level range of all three of those quests (which are ranked levels 22, 23, and 24) and we were all together and ready to go.

We had been to the Great Barrow, or a subset there of, as part of the Book I epic quest.  That was the run which Tom Bombadil sent us on, then showed up and finished for us, demonstrating that he did not really need our help, he was just trying to keep us busy.  Whose side is he on, anyway?

While we got our posteriors handed to us several times during that run, we had all gained a couple of levels since then and felt we were up to the challenge of the full on, industrial size, Great Barrow.

And it is a great barrow indeed.  Large.  Sprawling.  Full of twisty passages.  Populated by just the sort of horrors you would expect, and a few you might not.

Facing this new challenge was the following lineup:

And that was the way our lineup looked at several points.

And, in case you’re not up on the icon/class linkage, our group, from the top, was a guardian, a captain, a hunter, and a bard.

Once in the barrow, we faced a series of elite spiders that were a couple levels below us.  They were also very disappointing when it came to experience.  In fact, the experience factor for many of the mobs in the instance was disappointing.  A level 20 elite spider was worth all of 36 exp to me, and that was with the double exp bonus.  At level 23 that is bunk exp.

And, as if to prove that they were dangerous, we ended up with five elite spiders on us not too far into the instance and got ourselves defeated for the first time of the evening.

We found other gangs of creatures to assail us once we got through the spiders.  We were jumped by large groups on non-elites.  These included worms, rats, and disembodied arms!

Believe me, nothing gets the bad puns going like being attacked by a room full of disembodied arms.

Despite the bad exp and the bad puns, the Great Barrow is quite visually interesting.  You do not get that Diablo II feeling of repeating terrain tiles, or even the World or Warcraft level of reuse. (Though I understand that after the Great Barrow, some locations look suspiciously familiar.)

I particularly like this low fog/dry ice effect in one of the hallways: 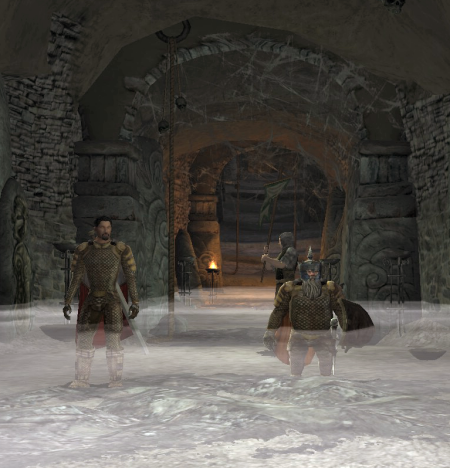 We chopped our way through the mobs as we explored the sprawling underground that is this zone.

Eventually, of course, we found our way into trouble.  Double trouble.  Trouble with the names Gaerdring and Gaerthel.

They start out nice at first, with a little speech that sounds like they are trying to sell you a barrow time share.  Then they get to the catch.

And then their nice little room turns into the killing floor.  Only, completely against our plan, we were the ones getting killed.

On the good side, only Gaerdring, a signature mob, attacks you initially.  I would guess that, once you defeat him, Gaerthel tries to get in on the fun.  That is only a guess because we never defeated Gaerdring.

We went zero for three vs. Gaerdring.

Why did we do so badly?

Once you engage him, more undead start shooting up out of the floor to attack you.  The fight was on!  Here you can see some of the extra undead, including the now inevitable creeping arms, starting to swamp us.

They were not elite, but there were enough of them to make life very hard.

We changed up our tactics with each attempt, but at no time were we even in the same area code as victory.  After the third round we were tired, mobs were beginning to respawn along the route to the killing floor, and Shooty’s pants went red, so we were done for the evening.

You just don’t want to be hanging around with pantsless elves.

So we skulked off in defeat.  Not only in defeat, but with not much to show for it except some very minor exp and some very large repair bills.

We’ll be back, once we get a couple more levels… at which point the mob exp will no doubt be infinitesimal.  That’s life in Middle-earth.