A few weeks back, when our daughter started kindergarten, my wife made her a Zuckertute, the traditional German gift for the first day of school.  In addition to the usual candy and such, there was something in it for which my daughter had been asking:  A Webkinz.

A Dalmatian Webkinz, to be specific.

Webkinz (one of those words that is both singular and plural I think, like sheep, fish, and email) are stuffed animals that come with a code that you can enter into the Webkinz web site that enables you to have an online version of it.

You not only get an online version of your pet, you also get a little one room house for it as well as some KinzCash, the in-game currency.

With the KinzCash you can buy furnishings for your house, clothes, toys, and food for your pet, and expansions to your living space.  Here is my daughter’s pet in one of her rooms and in an uncharacterist state of undress.  She had just sold a bunch of clothes to buy a game room. 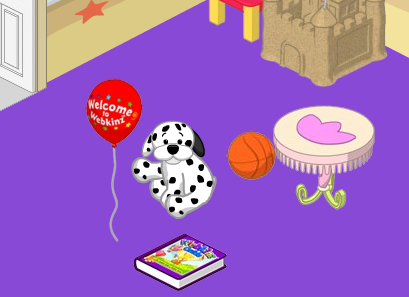 My daughter wanted a Webkinz because some of her friends have them as well as a good chunk of her cousins.  So on returning home from her first day of school, she got one of her very own.

Things began to crop up a bit in the Webkinz plan from the very start.  It was hoped that her computer, a 700MHz indigo G3 iMac, would be able access the Webkinz site, but it actually comes up short on system requirements.  So that will have to wait until I finally get a new iMac for her. (I am waiting for Leopard to ship.)

Instead my daughter has to play on my wife’s computer, which did not exactly thrill her, but which was at least a workable solution.  Then we found that we had to be there to read things on screen for her, though that passed fairly quickly as my daughter picks up patterns very quickly and is now picking up words at an increasing rate as well.

We entered the code from her Webkinz (good for one year of play), went through the “adoption,” and then off our daughter went into the world of Webkinz.

And a world it is.  I used “MMO” in the title of this post, so I am going to have to justify it.

The online part is there. It is all done through a web interface.

The multi-player part is there.  You can interact with other players, though in a very controlled fashion, in common areas.  You can play games with people, chat, and invite them over to see your house.

As for massive.. well… they say they have over 1 million registered users… even if they all only paid the $12.99 for a single Webkinz makes it a reasonable revenue proposition.  And since they have sold over 2 million Webkinz, they seem to be doing well enough to make the “massive” claim.

And the “Mommy” part in the title… I’ll get to that in a bit.  First we have to see what our daughter did immediately in game.

She spent all her KinzCash.  She bought an add-on room, some clothes, a bed, and some food.  She was broke in under an hour.

But have no fear.  You can make more KinzCash in game.  You do so by playing games or doing jobs, which are also games.

The single player games are mostly in the simple, addictive arcade type that make up much of the segment known as the casual gaming, while the multi-player games (which you can also play individually) are versions of classic games like checkers, battleship, and connect four.  Here is my daughter’s pet, in her more usual state of dress, in one of the game rooms.  The tables and such are stations where you can play against other players, or against the computer.

She was able,by herself or with a little help from me, to play some of the games and earn some more KinzCash so she could continue on her wee consumerism.  There are also a few games you can play once per day where you spin a wheel or other simple activity and get a reward, often KinzCash, without any skill being required.

We play Webkinz together some of the time, but our daughter seemed quite capable of playing it without our help in pretty short order.  She is fond of a fashion game where you choose outfits from a selection of clothes and let a panel of NPC judges score you, allowing you to win KinzCash.

KinzCash collected for our daughter, but it collected slowly… or at least too slowly for a five year old.  So she made the move I suspected she would.  She asked my wife if she would earn KinzCash by playing games while she was in school.  My wife declined.  She enjoys a game of solitaire on her computer now and again, but she isn’t the computer game type.

I was to learn, however, that mothers playing Webkinz to earn KinzCash for their kids was fairly common in my wife’s social circle..  She mentioned this right away, and a couple of weeks later at a housewarming party I got to meet one of those moms.

I brought up the topic of Webkinz with the mother in question and told her that I had played some Cash Cow 2 while on a conference call to earn a bit of KinzCash for our daughter.  Pictured below, it is a simple game where you try to click on groups of two or more “bottle caps” (it is a milk bottle vending machine) of the same color to remove them and earn points.  Scoring goes up somewhat geometrically the more caps you get in a group, so you want to avoid clicking on pairs if you see a way to tyu

A simple enough game, and very much like one I used to play on the Mac about 15 years back.

She gave me a very small sigh and said it was common for new players to enjoy Cash Cow for a while before they moved on to other games.

And she said it in  just the right tone of voice to make it clear that I was a noob.  A noob!

I said that if they only had solitaire in WebKinz, my wife would probably the maternal KinzCash farming club.  She told me that they used to have solitaire WebKinz, but that it was bugged.  It used to give out a lot more KinzCash than it was supposed to.  She used to play it all the time.  It is the reason why her daughter has a fully furnished 10 room house.

This woman did not know it, but she was speaking a language I knew well.  The language of online gaming.  All that was missing was some mention of griefing… but you cannot have that in a kids game… can you?  No, I think not.

The terminology she used was different, but the meanings were universal and crystal clear.

All in a web browser and enabled by a plush toy available at your local Hallmark store!

The kids do not seem to see it quite through the same lens, at least not the kindergarten crowd I’ve spoken with.

But the mothers.  Watch out.  There is an untapped MMO market.  Will Webkinz lead to some WoW-like destination?

13 thoughts on “The Mommy MMO”