Ages ago, after I stopped playing Stellar Emperor, but before I started in on Gemstone and eventually Sojourn/Toril MUD, there was a game I played called Air Warrior.

It was an online game featuring real-time, multi-player, air combat.

Air Warrior could also be played on the Amiga, Atari ST, and eventually, on MS-DOS compatible machines.

Dozens of people would be online every night, on the GEnie network, flying, fighting, and dying online in a 3D environment that existed before 3D acceleration was even a consideration.

I even saw Jerry Pournelle in game one night.  Though, as I recall, all he did was fly off in the wrong direction and complain that if the game were realistic, we would all by flying Mustangs, not the Spitfires and Focke-Wulfs the knowing players favored. (It was the 20mm cannons we all wanted, they made possible a one-pass kill and screw all that dog-fighting… or stall fighting… nonsense.)

Of course, in the age of Intel 386 machines and 1200 bps modems (I was special, I had a 2400 bps Zoom modem) things were not always as smooth as everybody wished.

Some nights it was a nightmare of warping around the sky, shooting at targets that were not there, and being shot down by people nowhere near you.

It was no doubt one of those nights that spawned this parody of the Air Warrior Macintosh help screen: 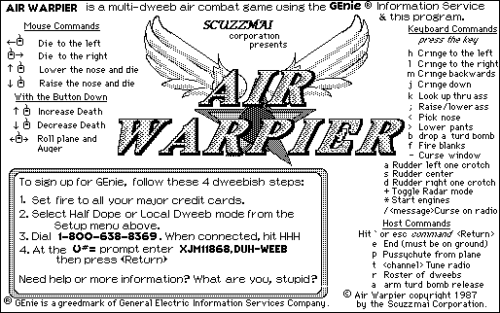 I wish I had the real screen for a comparison shot.

I found this file deep in an old folder that has been dragged from computer to computer for the past 18 years at least.

I do not remember who put this beauty together, but I am sure that the 4-Q Squadron had a hand in it somehow.

Aside from that screen and a map of the “new” pacific theater that came along when they redid the terrain, I have no pictures or screen shots left from the game. 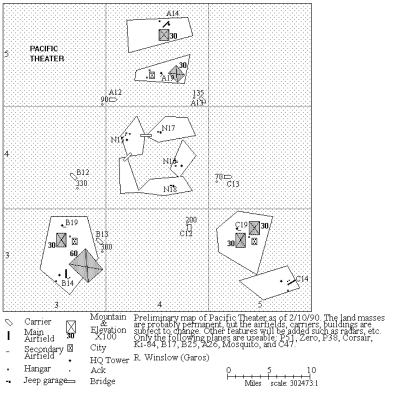 So Air Warrior and those early days of multi-player gaming is only a memory for me now.

Kesmai and Air Warrior lived on for a while after the passing of GEnie, but were eventually purchased by Electronic Arts and disappeared.  Where have I heard that story before?

The spirit of Air Warrior lives on today in the game Aces High.