After getting to 59, I still had a couple more quests left to clean up in Lesser Faydark, plus two city writs, so off I went.

Running through the last couple of quests and the writs ended up with Blintz about 20% into level.  But at that point he was left with nothing but heroic quests in LFay.

Wondering what to do, I decided to go on another spending spree.

I headed to the broker to buy out a few more collection quests.

Last time I spent all of two plat, which still seems like a lot of cash to me.  But I remember complaining when some of these collection quest items were close to a whole GOLD in price!  Now I do not even think twice about something that is only a gold.

This time around I splurged a bit more, forking out about 7 plat for collection items.  I even managed to get the rhino horn collection quest from Kunark.  At least I think it is from Kunark.  Rhinos are a theme there and all, at least when it comes to mounts.

This time the outlay paid off a bit better.  I jumped from around 20% into level to 97%.

With that little amount left to go, I grabbed one more city writ for creatures in the Shadowed Grove and headed to Lesser Faydark to get that level.

I like the Shadowed Grove primarily because of one creature, the void beast invader.

At rest, the void beast invader looks like a human silhouette, but when he moves, he suddenly unfolds into a scary looking creepy crawly critter, like this:

Somebody did nice work with that creature idea.

Anyway, 3% did not take long.  A few Shadowed Man Invaders for the writ and the level was mine. 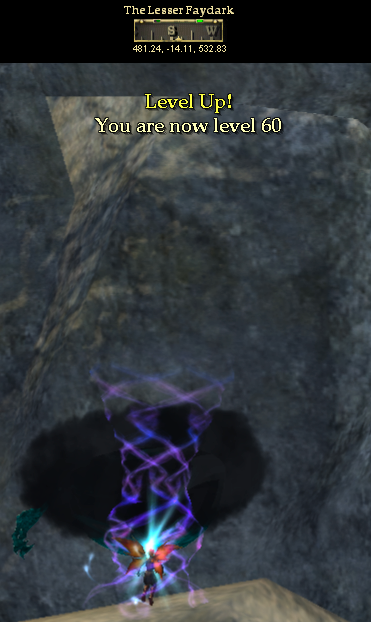 60 at last.  Another level cap reached… the level cap for the two-year old Desert of Flames expansion.

Blintz was created on November 15, 2006, so it took about a year to get to level 60, though I have not played him very much over the last four months.

I was so happy that I grabbed some more writs and headed off to the Loping Plains where, after some initial success, I proceeded to get my ass handed to be repeatedly.

I think I will cross Loping Plains off my list for a couple more levels and see what the Kingdom of the Sky has to offer.  I have not spent much time there so far.