Another Saturday night down the drain. Down the drain in the Coilfang Reservoir and to the Slave Pens for our second run through.

Last time around, missing Bung, we had Nerral, a level 70 druid join our group. That lets us do the instance, but did leave us wondering how different it would be without level 70 muscle behind us. So in we went with the usual group.

The short answer is that things weren’t drastically different than last week.

Once in we had not real problems with the yard trash mobs, except once when we pulled a group of five, forgetting that Bung was AFK. Taking on five elite with you damage guy and off tank pet out of the picture turned out to be more than we could handle and there was a wipe.

Earl got to add a new tool to his arsenal, the Goblin Rocket Launcher, which he used to pull mobs with great comedic effect. Each shot throws the shoot on his back.

The rocket puts out enough damage to ensure that the targeted mob heads straight for Earl. The only drawback is that the rocket also has a stun effect on the mob it hits, so the main target often ends up lagging behind the rest his pals when you’re pulling a group.

As for the rest of the run, well, the bosses are always key.

With Mennu the Betrayer we did about the same as last week.

He is a shaman and he pops off healing totems like my grandfather used to drain scotch and sodas, which is to say early and often. We had the usual totem destruction mix-up, as Mennu seems to know who has been pegged for totem patrol and his totems end up on the far side of the battle from the designated totem popper. So it was slow going for a bit until I just started whacking totems with my big old mallet. 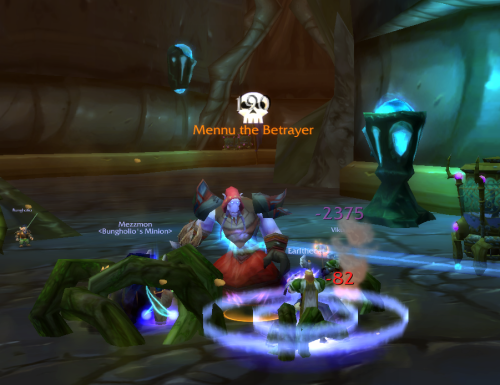 And so Mennu went down.

I did stop and take some pictures of the scenery along the way.

Last time around Rockmar gave us fits, causing a wipe on our first attempt and leaving three of us down before he died on the second attempt.

Taking some of the advice offered on last week’s post, this time around Vikund stay out of the melee and helped with the healing instead.

This worked out well and Rokmar went down with all of us still standing. We did give up healing a bit soon though, as the Grievous Wound attack was still on Earl, killing him not long after the fight ended. Still, Rokmar went down first this time.

He also coughed up a nice, new hammer for Vikund, the Coilfang Hammer of Renewal. It isn’t so hot for damage, but it looks really cool and it buffs up Vik’s healing a lot, so it is worth holding on to just to give him the extra healing edge when we need it. 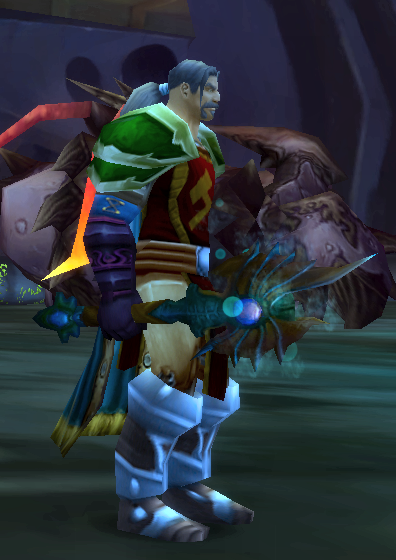 That just left Helen Quagmirren for us to take on. Last week he wasn’t much of a match for us, but then we had Nerral the nature boy along to help out. This time around we were somewhat lacking in the nature resist department and Quagmirren stomped us good the first time out.

Ah well, so it goes.

The next time around we finished him off, and thus finished off our second run through the Slave Pens. 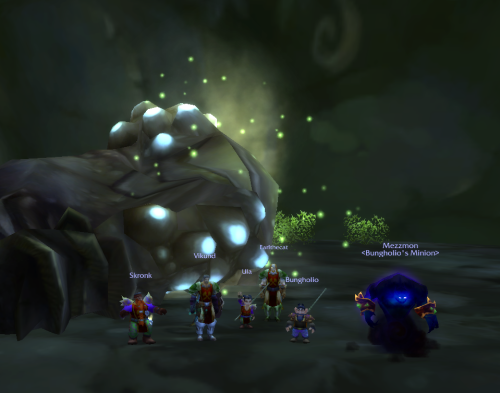 Next time we will be looking into The Underbog!