It was Saturday night and time for ancient television references as we went to face the Underbog.

The name alone inspired me to sing out on Skype:

Speed of lightning! Roar of thunder!
Fighting all who rob or plunder!

This generated something of a stunned silence from my fellow travelers who rebounded after a few moments in a silent agreement to simply ignore that outburst and move on as though it had never happened.

I guess I am the only Wally Cox fan. I’ll just keep my copy of “The Bedford Incident” to myself then. Carry on, Seaman Queffle.

(And in getting the links to the above silliness, I also found out that Larry Storch was the voice of Phineas J. Whoopie. I had no idea! That so makes up for that horrible guest appearance on CHiPs with Larry Linville.)

But enough side tracking, on to the instance. And we moved on to it with the following group:

That was the same level line up as last week, though we were all getting close to 65.

The instance itself is down the drain in Coilfang Resivoir with the Slave Pens, off to the right of the meeting stone.

We went in, spelled up, and began the crawl, Earl’s Goblin Rocket Launcher still pulling for the team.

That is never not funny.

At first things went well enough. We cleaned up the trash and found our way to the first boss, Hungarfen.

He actually has two minions standing with him, so we were ready for a big fight, but when Earl tagged one of the minions, only the pair of them came. Hundarfen remained behind.

So the pair went down easy enough and we went after the big guy.

That did not go as well.

By himself, Hungarfen isn’t such a big deal, but as you fight him, these mushrooms start growing out of the ground in his area. Explosive mushrooms. And like some Super Mario nighmare scene, they exploded and did a lot of damage. Caster killing damage. Which turned into party killing damage pretty quickly. Wipe!

And so we regrouped and tried again.

This time Earl went out and kept Hungarfen in motion, moving him away from mushrooms while Skronk and Vikund worked on healing and Bung and Ula did the damage thing.

That went much better and Hungarfen was defeated.

From there we followed the obvious path up some ramps, through the usual trash mobs, and towards the next boss, Ghaz’an.

Ghaz’an lives in some sort of underground Sea World establishment and hangs out in the central tank. We did get into a bit of a scrape with the guards at the door and ended up in a battle with seven of them at once, which left both of our healers dead, yet somehow Earl hung on and all seven were slain.

We cleared the spectators until only Ghaz’an remained… and the fish. Ghaz’an shares his tank with a bunch of aggressive fish. You don’t want to fall in that water. I know. 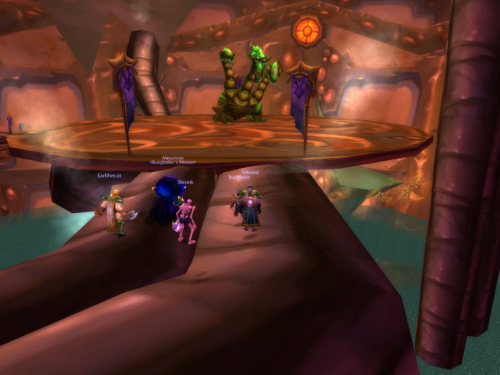 The fight with Ghaz’an was touch and go, with Vikund, who was trying to play backup healer again, standing in the wrong spot and getting knocked off the platform three times. This is how I know the fish are aggressive, as they came after Vik. Fortunately, this isn’t EverQuest II and the fish stay in the water. (Okay, water creatures don’t do that any more in EQ2, but I still remember being chased across the Thundering Steppes by a flying octopus.)

Anyway, when Vik wasn’t running back up to the platform, he was trying to keep Earl healed, which turned out to be a tough job, as Ghaz’an’s area attacks ended up taking down Ula and Skronk. Then Earl went down and Vik rushed in, forgetting that he hadn’t bothered to heal himself at all.

Fortunately, Ghaz’an was about done as well and we prevailed on our first run at him.

He dropped our only nice loot piece of the night, a 2H mace called Hatebringer. And, being the only 2H mace wielder, Vikund got it. The rest of the bosses just taunted us by dropping leather pieces.

Done with Ghaz’an, we were somewhat lost. We didn’t see a way out of the tank room other than the way we came, so we doubled back and went looking for anything we might have missed.

After much searching we ended up back at the tank room. We decided we had better search the water.

It appears that when Ghaz’an goes down, he takes his fish friends with him, so the water was safe.

While we found nothing in the water, Earl noticed a crack in the side of the tank that, from some angles, just looked like a change in color. We swam over, climbed through, and finally found our way forward.

With the 45 minute wandering over, it was back to fighting. There was no losing the trail now though, as it was one long cavern that lead to the third boss, Swamplord Musel’ek.

The swamplord has a companion, Windcaller Claw, a druid who has been charmed by the swamplord and who fights for him in bear form.

We went with the basic plan, assumed that Claw would come to our side once his master was down, so concentrated on the swamplord. And we died for our trouble. Claw has some bad attacks.

Skronk died a little too close to Swamplord Musel’ek and ended up getting killed again quickly. Short a soul stone and had to run all the way back from the graveyard for round two.

The second time around Vikund went after Claw and pulled him away from the main fight while everybody else hammered Swamplord Musel’ek.

This turned out well, the swamplord going down readily. Then we turned on Claw who, at 20% health, restores to his normal form and becomes the last mob you need for the quest Lost in Action.

With our lost wanderings and wipes, it was getting a bit late for us. We are now used to nice, two hour or less runs, and we were well past three hours gone at that point.

But there is not much left after the swamplord. A couple of mobs, then the Black Stalker, the biggest marsh walker in the swamp.

The fight with him was short but violent. The Black Stalker has an effect that lifts a party member up and out of battle until it is dispelled. For some reason, Vikund was the main recipient of the attack, and spent a good deal of time airborne.

While waiting for a dispel, I just pretended to be asteroid mining in EVE Online.

Flighty paladin or not, we beat him down quickly and were done. 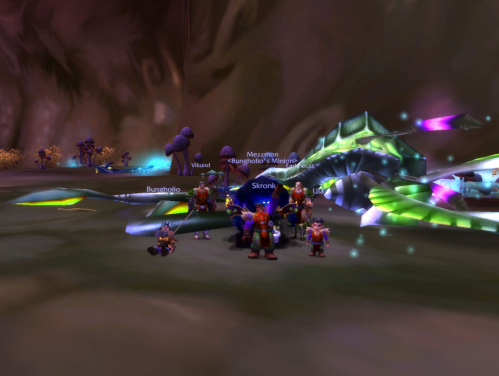 And that rounded up our first run at the Underbog.

While the next instance on the list is the Mana Tombs, we actually went into the Underbog without all of the quests for the instance. That will probably mean at least one return trip. We could probably use the experience too. Looking at the instance guide, the level recommendations for upcoming instances ramp up rather quickly to level 70. Everybody except Bung hit 65 on this run, but it might be nice to get closer to 66 before we move on.

We’re thinking about level 66? We might hit level cap before Wrath of the Lich King hits the shelves!

That would be a new experience for me!