Saturday night and the band was back together for the first time in a few weeks. Time to play a main and to put away our alt-ish things. The mains were now all level 65 at least.

But what to do?

After out defeat at the Mana Tombs a few weeks back we were not keen to jump into that again until we had either some better equipment or another level or two.

We could have gone back to either the Slave Pens or the Underbog, but did not feel that was really going to do much besides get us some experience.

In the end we decided to hit Terokkar Forest to do some quests and see if we could upgrade some of our equipment.

Fortunately Earl had already been out there with his level 70 alt, so knew the different points in the zone to gather up quests.

Gathering up quests, of course, started some drama on its own. Most of us had at least 20 quests hanging about in our quest logs, some of them dating back to Blackrock Spire and before. So, to pick up the 15 quests from the Bone Wastes end of Terokkar meant parting with a lot of quests.

After much “are we ever going here again?” and “but I already have 3 out of 10 of these!” we eventually all made enough room for the new quests and headed out.

We tried to stay on the “one kill updates everybody” quests, avoiding the quests that required everybody get a drop that only showed up once per mob. Eventually, running through the quests we hit on some group quests. The experience was okay, though there were not many equipment upgrades to be had when it came right down to it. It was not like the first dozen quests in Hellfire where you pretty much get a new wardrobe.

It was nice to be in an outside zone though, and one not as claustrophobic as Zangarmarsh. The group quests lead us to some pretty big mobs, like this spider. 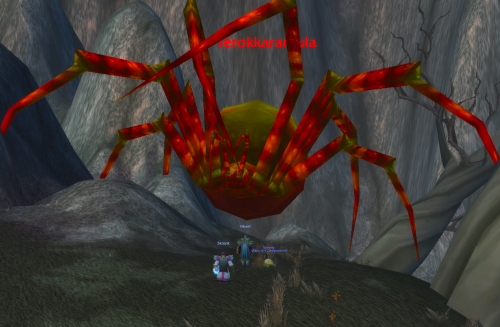 “Go on, smoosh it!” says Skronk

And then there was this skeletal beast. We had to go through a ritual to summon him, then didn’t see him for a few seconds because he was so big he seemed to be part of the scenery. We had to look up to see him.

We did not end up getting any levels as we were all pretty much in the first third of level 65, but we made progress. Another round of quests and we’ll be into 66 and might be ready for another go at the Mana Tombs.

2 thoughts on “Everything is Big in Terokkar”