A new line item showed up on my Warhammer Online account yesterday: 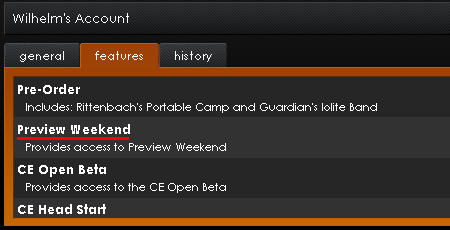 (Actually, it looked different yesterday.  They updated the account management interface over night.)

I had heard mention of the preview weekend coming up, but was not sure I was on the list.

I dug through my email spam filter for a message from “nobody@eamythic.com” (thanks to Bluelinebasher) and found the details.

It is our pleasure to invite you to the Warhammer Online: Age of Reckoning Preview Weekend taking place this Friday, August 22nd thru Monday, August 25th. Join thousands of your fellow players and experience the Age of Reckoning for the first time as you adventure through two tiers of content across three campaigns.

This is an invite-only event, so don’t delay in preparing for WAR and be one of the first to engage in the thrill and glory of RvR combat before the rest of the world!

Below are instructions on how and where to download the game:

– If you are currently in the WAR closed beta, you will automatically be granted access to the Preview Weekend. Simply continue to patch your client and you’ll be ready to play.

– Download the open beta client from Fileplanet.com (http://www.fileplanet.com/betas/who_key_auth.aspx). You will be required to create a free FilePlanet account and input your open beta pre-order code to access the file.
– In addition we also provide the client via bit torrent as an alternative means to download. You will find the link to the Torrent file here: http://torrent2.eamythic.com/WarBeta.torrent

Welcome to WAR. See you on the battlefield… WAAAGH!!!

I already have the client downloaded and ready.  For once a huge download did not fail over night while I was sleeping.  Now to get a peek at this WAR thing.

Casualties of WAR, the Warhammer Online guild which I and a surprising number of bloggers, friends, and family are joining up with, will be changing its recruitment policies as of midnight CST on Friday.

The guild leaders are using words like “standards” and “vetting.” We might, you know, be a wee bit selective going forward.

So if you want to join Casualties of War with a minimum amount of fuss, run over there before the free-for-all times out.

Go to the applications forum, read the simple rules and follow them.

I must say I am impressed at how many have followed the simple rules! I think the guild is getting the cream of the crop. (Of course, we still let Darren in and he didn’t follow the rules, feeling his celebrity status was enough I guess!)

Some time this weekend there will be a new set of rules posted about applying to the guild.

Personally, I am pushing for a 30+ minute interview in the sweat lodge with the council of elders like I had to go through to get into The OGV.

[*Due to a last minute surge of applicants, the guild applicant process has been put on hold earlier than expected until the new version can come online. The free-for-all endeth.*]

Saturday night and we were down a tank, so the four of us remaining took a trip to Shadowmoon Valley to work on a few group quests. Our group was:

With Vik back in protection spec and Skronk rolling holy again, we felt prepared.

I haven’t spent much time in Shadowmoon Valley. We bypassed it for the most part. But my minor past experience there was that it can be a tough zone. 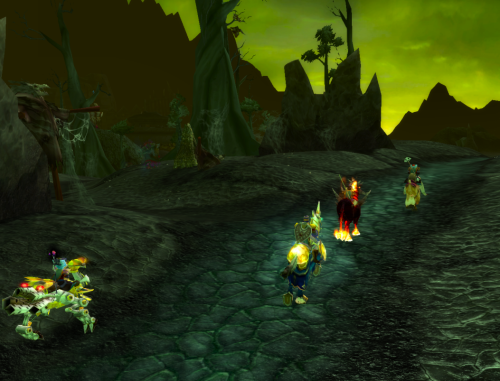 Riding to adventure... or away from danger... in Shadowmoon Valley

And that impression was reinforced as we did a series of quests on the Path of Conquest.

The Path of Conquest is somewhere between a zone and an instance.

On the instance side of things, you have plenty of elites, annoying patrols, and a couple of bosses. But everything respawns like an outdoors zone.

Which meant lots of running around and surprises.

We nearly wiped on the elite, named patrol that moves along the path. Nearly, as in Vik did not have to run faster than the patrol, just faster than the mage and the warlock.

Still, we collected ourselves and with the usual knee-bent, running about, advancing behavior we were finally able to make our way to the two named elites at the end who were on our hit list.

Dispatching them and finishing the quest was enough to put Bung over the top and into level 70, making him the second member of the team to hit the level cap.

And, since we were right there next to Wildhammer Stronghold, Bung was able to train for and purchase his flying mount. Just the base model, not the epic, but he is now able fly!

Vik, Ula, and Earl are not far behind though. We should soon all be airborne.