Saturday night found the group back in Azeroth and full of holiday spirit.  It was the last night of Hallow’s End and we were determined to find the Headless Horseman.

The usual suspects were out, all still at level cap:

I had done some scouting with my hunter earlier in the week to find the Headless Horseman.  Thinking that, since he was in the the graveyard of the Scarlet Monastery, that he might be manageable, I summoned him and got smacked down.

He turned out to be a bit higher level than the rest of the instance, being a level 70 boss mob.  My pet and I didn’t get one-shotted, but the fight was only a couple of minutes before we were both down and the Headless Horseman was barely scratched.

I mentioned this to a friend who gave me the basics of the fight, plus the tidbit that everybody can summon the Headless Horseman once per day.  That meant if we went in as a group, we could do the fight five times and harvest five times the drops.

So the goal was set, defeat the Headless Horseman on Saturday night.

At least I did not have to do any traveling myself.  While I waited for everybody else to find their way back to the instance we last ran so long ago, I hung around and played “Dance, Dance, Recursion” with the horde guys who were hanging out.

Once we were all assembled, we headed on in.  At level 70 the mobs in the graveyard wing are like tissue paper.  On my run in with my hunter I had a problem getting a hit in on some because my pet would kill them so quickly.  So we had no trouble getting to the pumpkin that summons the Headless Horseman and clearing the area.

While I had gotten the basics of the fight (summon him, fight, he throws his head, kill the head, he is back to 100%, fight him again, again with the head, summons some helpers, do him in at last) the actual fight was a bit challenging the first time out just because we still weren’t sure how it would play out.  We are not hard core and level 70 bosses do kill us with surprising regularity.

But we managed it this time.

Headless Horseman Down in Flames

That accomplished, we just needed to summon and defeat him four more times to maximize the loot potential.  So, one by one, we all got our turn to summon him.

Ula Gets A Turn

Things went well on the next fight, but then, on the third round, Ula got zapped early on and we learned that if you do not kill off the Headless Horseman quick enough in that last stage, he does the head detach routine again and summons more minions.  Being short a good chunk of our DPS, we got into a loop and were slowly ground down until we wiped.

We carried on, bringing the horseman back and defeating him two more times. 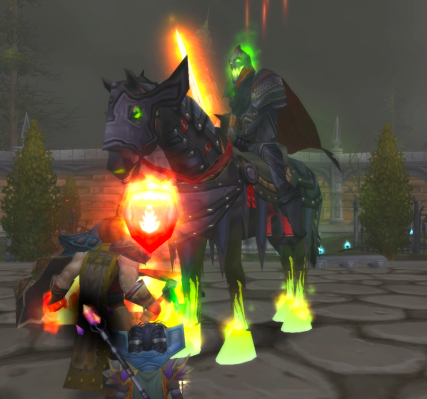 The Horseman Up Close

We decided we wanted that fifth bite at the loot-drop apple, not having gotten that epic mount drop yet.  So I pulled Vikund out, he being the most replaceable member of the group, and brought out Tistann my hunter to summon the Headless Horseman one more time.

We did the fight one more time, brought him down, and failed to get the mount.  Oh well.

We did end up getting three Witches Bands, two Horseman’s Signet Rings, the Magic Broom (which Skronk got), a couple of Hallowed Helms, and all the Tricky Treats we could ever want.

We recalled back to Shattrath where Skronk demonstrated the flying broom and we ate Tricky Treats until we threw up.

Skronk Spews On A Passing Pirate

There is, of course, and achievement for eating candy until you throw up.  And one for killing the Headless Horseman.

That covered, and with a little time left on our hands, we ran off and did a few daily quests.  I had never done any of the daily quests.  Some were fun.  I’m always up for a bombing mission. Some were the same old thing, kill n of x.  They were lucrative, of course, but I’m not sure I would do them… you know… daily.

And with that we logged off for the night.  We still have to figure out what we are going to do this coming Saturday night.  The Lich King is still more than a week away.

10 thoughts on “Hunting the Headless Horseman”