Saturday night and we got the full team into Northrend again.  The lineup was:

And it was back to Utgarde Keep for us!

A level for most of us and some more equipment upgrades along with some research and the advice people offered after our last attempt made us confident enough to go for it.

As before, the initial forge area did not present us much of a problem.   We carved our way through that to the Proto-drake stables.  Here we avoided wiping, having had much practice fighting the beasts. 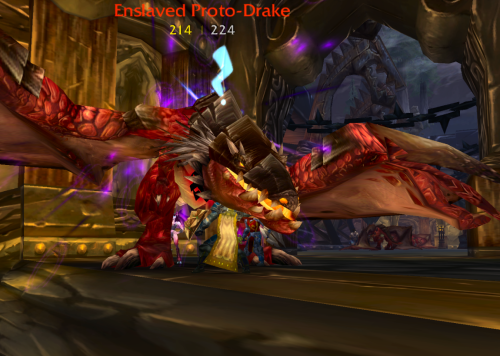 We lost Skronk once in a fight, but otherwise did well.

We fought our way through and eventually found ourselves back at our old familiar resting place on Prince Keleseth’s door step.  We made our plans, summoned our baby blizzard bears, and prepared to fight! 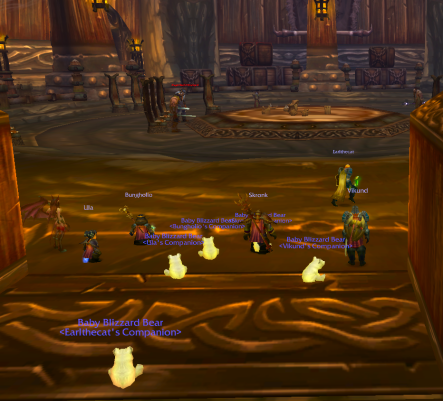 Here We Are Again

We cleared his four guests and then brought the action to the Prince.  And we were close.  So very close.

He was under 20% when the wheels came off and the inevitable wipe ensued.

Yet, this was as close as we had ever gotten to killing the prince.  We were enthusiastic.  We were ready.

And we wiped two more times.

But those two wipes were due to mistakes made early on in the fights.

Finally, on the fourth run, with a little bit of tuning to our original plan, it was down with the Prince!

The Prince Is Dead!

In fact, the fight felt pretty easy the last time around.  Things went right and well all knew we were going to win by the time we had him half way down.

The one change Vikund made was to go with Seal of Wisdom for the fight rather than Seal of Vengence.  I do not know how much this helped turn the tables, but in the previous fights, Vikund ran out of mana, while in the last fight he was pouring out the concencrates (for those pesky undead helpers) and exorcisms through the whole fight.

Is there a group damage parser that works with 3.0.3?  I’d like to be able to tell how much a change like that made to the fight.

The prince was down and I could take a moment to admire his table, which turned out to be a map.

Northrend – You Are Here

So, at last, we were able to move on.  Further into the keep we went until we ended up facing the next boss, or bosses, Skarvald the Constructor and Dalronn the Controller.

We had read ahead in our research and knew that the trick to this fight was that whoever you kill first of the pair comes back as a spirit and continues to kick your ass until you kill the other guy.  The recommended approach is to kill Dalronn first.

Or so we read.

The actual tip that we read said to try to bring down Skarvald’s hit points first, then kill Dalronn, then finish off Skarvald.  Unfortunately, we DoT’d Skarvald up good, so when we switched to Dalronn he died anyway, then came back as a spirit and pounded the crap out of us before we could finish off Dalronn.

Still, it felt like we were close.  A matter of timing as opposed to some huge flaw in the plan.  We did not have a soulstone ready quite yet, so we released and ran back to the instance, only to find…

Spoiled by the Outlands instances, which never seem to respawn, we were surprised to enter the instance and find it held in force against us again.  We had dawldled some in our progress through the instance, stopping for snacks, bios, doggie needs, and moving small, sleeping children to their beds.

We were able to get past the entrance without having to kill everybody and were able to sneak past the forges by hugging the walls.  When we got to the proto-drake pens, the first one we killed had respawned.  It was getting late, we did not want to fight out way through the drakes and such again, so we knew, with the soulstone available again, we would have just two more bites at the apple before we called it a night.

And we blew it both times.  Bad luck early in both fights, those events where you just know you’ve lost before the fight is even really under way, like the priest getting charges by Skarvald and Shadowbolted by Dalronn in the first seconds and dying because, oops, we forgot to buff fully.

We think we can manage it though, next time.   In the mean time Earl is going to go out and get level 71, upgrade some of his remaining gear such as his weapon.

We won’t be back this coming Saturday night however.  We’ll be short two players, so Keleseth, Skarvald, Dalronn, and friends will have to wait until the following week to get theirs.

11 thoughts on “The Death of Prince Keleseth”