It is about time for an update on my progress in Norrath.

As something of a recap, Gaff, Potshot, Ula, and I all rolled up new characters on the Guk server in order to get a fresh new start in Norrath.  We even went with Freeport

This post started off as something about managing to get four characters to level 20 while avoiding any “420” references, but while I was considering that, one of my characters passed the level 30 mark.

Reynaldo Fabulous, a berserker character I rolled up initially just to get a screen shot for this post ended up being quite a fun character to play. 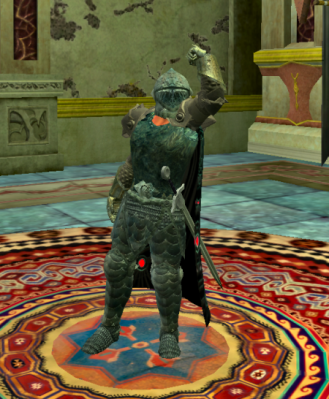 Reynaldo in the Guild Hall

I’ve held my fury, Torill, in reserve to play when we get a chance to group up, buy Reynaldo has become my solo champ.

I have played him through mostly “classic” content, the Isle of the Overlord, Freeport, the Commonlands, Nektulos Forest, and now into the Enchanted Lands.  Or the Littered Lands, as I tend to think of it.  I know everybody loves collection quests, but at times it looks like somebody’s homework got blown all over, with little pieces of paper everywhere.

I have seen some new things with him, like this guy in the Commonlands. 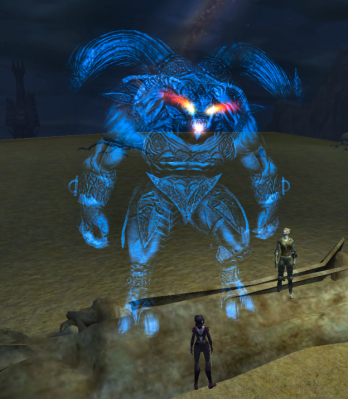 You are new here, aren't you?

I forgot to put down his name.  He sure is big and glowy though!

And I got to see some old friends in the Enchanted lands.  I just love this quest.

And I even managed to get Reynaldo through The Return of the Light solo once he hit level 34.

Granted, it took a while… and six deaths… to finally spawn and then finish off General Drull at the end.  Not bad though, considering that Reynaldo was still wearing his tier 3 armor set at 34.  The feysteel longsword helped though.

But our little coalition seems to be falling apart.

Real world deadlines have kept Ula out of the game for a couple of weeks, which has also kept Potshot out as well I gather.  Gaff, as usual, has completely run away from me in levels, hitting level 74 (with his group of three characters) about the same time Reynaldo hit level 34.  But even Gaff  is starting to lose steam it seems.

Which means that solo seems to be the path for me, and I am not sure I am up for that again in EQ2.

So Reynaldo Fabulous may soon be saying, “Farewell Norrath!” as this years EverQuest Nostalgia Tour comes to a close.