The Saturday night after Christmas found us arrayed again before the doors of Utgarde Keep for another fun run.  Our lineup was:

Only Earl had played much over the intervening two weeks, so you might ask why we thought we would do better than previous attempts if not much had changed.  Laziness?  Lack of initiative?  Determination to press on?  Insanity?

You can speculate, but we’re not telling.

We decided to skip anything that we could get past.  That meant that we only killed two of the three groups working the forge and only three of the enslaved proto-drake groups while sneaking past all the rest.

That brought us to Prince Keleseth again.

We killed his four minions and then debated as to whether we could just bypass him or not.

Watching his pacing back and forth, we thought it might be possible, but decided to take him down just to be safe.

We wiped on the first fight due to bad positioning.  We positioned ourselves off to the left, then were talking about the fight when Prince K walked into aggro range and started attacking us.  We nearly pulled it off all the same, but didn’t quite make it.

The second fight, started from a little further back, went much more smoothly and the Prince K went down.

Since last time I had installed the addon “recount” that was suggested by some people as a damage parser.  I reset it before the second Prince K fight, just to see how much a pally with a shield was holding back the group.  The results: 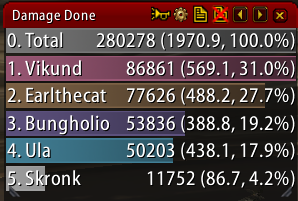 A pally with a shield still does pretty well DPS-wise when it comes to undead I’d say, but I’m afraid to ask what this damage output says about our group overall. 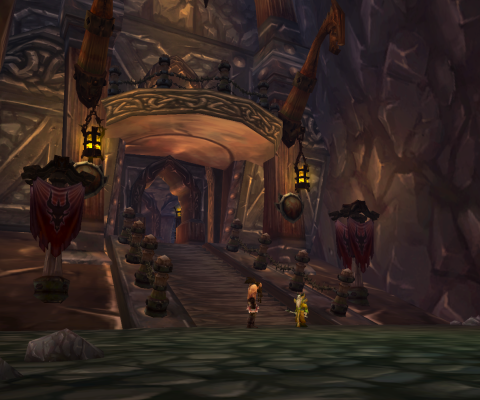 This fight took us a few tries.  We seemed to be coming close each time, bringing down Dalronn but not lasting through Skarvald.  His charges during the fight were causing too much damage, even when Earl was tanking Skarvald and Vikund was tanking Dalronn and most of the charges were hitting Vik. 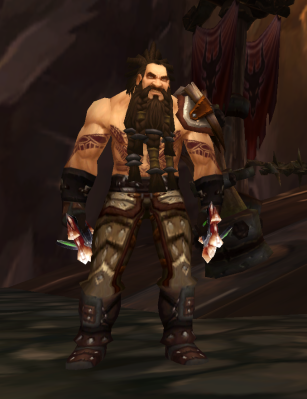 Skarvald Charges, But Pays Off His Balance Every Month

Eventually we went to the web and read that Skarvald has a minimum range on his charges and that if everybody just sticks close, he does not charge.

With that bit of information on our side, we handily won the next fight.  Piece of cake.

And suddenly we were in new territory.

We fought our way up some more stairs and out into the open, the final battle taking place on the roof of the keep. 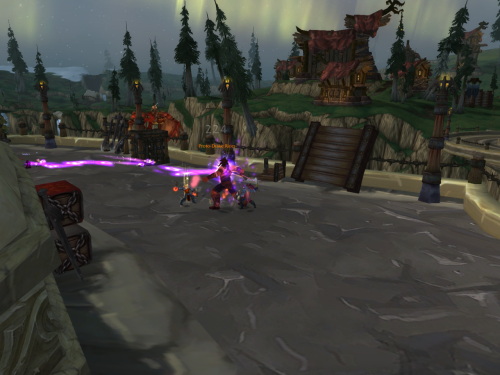 Fighting Atop The Keep

You can look out and see all of Howling Fjord around the keep.  Or at least the instanced version of it.  We fought our way onward.

Spiritualist Is A Female Dominated Profession Among The Vrykul

Until, at last, we faced the final boss.  Ingvar the Plunderer stood before us.

His head would finish the last quest and end the instance for us.  We just had to kill him… twice.

You see, you kill Ingvar, which isn’t so tough, and then he comes back from the dead and you have to kill him again, which is a bit tougher.

We had a soul stone handy, so we knew we had at least two tries in us.  We nearly did it.  Both times in the second fight, one of us did not get out of the way of Ingvar’s dark smash in time, an attack that is a one shot kill if you are at all down on hit points.

After our two fights we had to release and start the run back through the instance.  However, as happened last week, we ran into respawns.

Couldn't You Have Taken The Night Off?

The hour was late and we did not want to fight our way back to Ingvar again, so we called off further efforts; so close to our goal, but not quite there.

We took a portal Ironforge where we played with the Crashin’ Thrashin’ Racers we all got for the Feast of Winter Veil.  Vikund even got the associated with the racer for crashing into other racers 25 times.

We’ll be back for Ingvar soon.

22 thoughts on “Facing Ingvar the Plunderer”