Felix the cat came to live with us in the Fall of 2000.  We had just moved into a new house and decided it was time to add a cat or two.

Felix was a rescue cat, already an adult when we picked him out, or he picked us out.  Before he came to live with us he had been a feral cat living in the parking lot of one of the IBM facilities off of Cottle Road in San Jose.  There he has been fed by people who worked at the facility.  When it was shut down in 2000, one of the women who worked there picked up Felix and brought him in to be adopted.  She is the one who gave him the name Felix, which seemed appropriate for a happy black and white cat.

At the same time my wife and I had bought a new house and had settled in enough that we thought it was time to add a cat to the mix.  And so we went to the pet adoption fair that was being held at the pet store near us.  There we met Felix, who was warm and friendly and crawled into my lap.  We were happy and the adoption people were happy, as they often have problems placing adult cats.

Once at our house, a strange new environment, he immediately hid under our bed.

We set stuff up around our bedroom for him, since he did not seem inclined to come out.  However, once WE got into bed, he decided that it was better to be in the bed than beneath it. 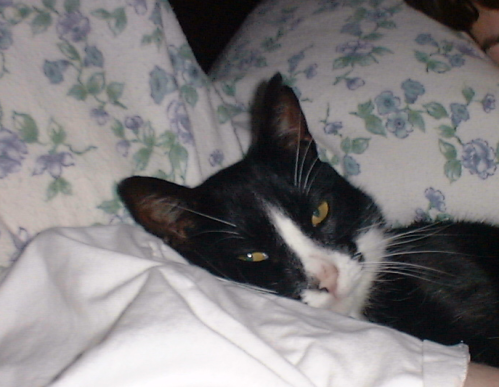 A week later we added a kitten to the mix, who we named Oscar, which also turned out to be an appropriate name, as he and Felix were an odd couple.  While Felix was quiet, friendly, and happy to meet everybody, Oscar was aloof, afraid of almost everybody, and loud.

Still, they became the best of friends.

Comfy on my clean shirts

Most of the time, anyway.  Oscar could be a bit pushy. 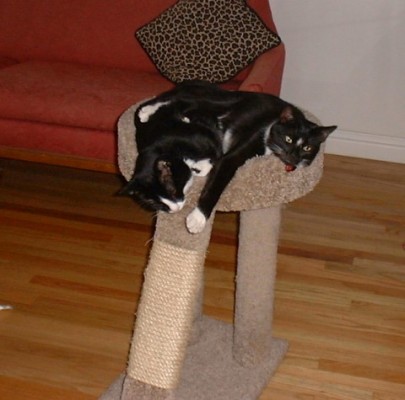 Not quite enough room for two

Life went on.  Our daughter was born.  Felix found somebody new to cuddle with while Oscar… hid under the bed.  The Felix fan club grew.  Life was good.

A cat in his prime

But time passes quickly.  Last summer, Felix started having health problems.  We never knew how old Felix was.  His early years as a feral cat were undocumented.  But we estimated that he was at least 12 and perhaps as old as 15.

His teeth were bothering him and, while at the vet for that, they found a tumor in his abdomen.    Tests said that the tumor was not malignant… maybe.  Operating did not seem likely to extend his life expectancy, so we decided to make him as comfortable as we could.

He had lost some weight and kept getting smaller and more frail.  In an effort to get him to eat my wife ended up cooking for him.  He would nibble some, but never really seemed hungry enough.

Then last weekend Felix’s health took quite a noticeable dive.  He began to seem quite frail.  He was having trouble getting around.  Food no longer interested him.  The time had come to say good-bye.

We cried a lot.

Even after the first big outpouring of grief, the tears kept sneaking up on us at unexpected moments.

They still sneak up on us now and again.  Even Oscar has been looking for his pal, walking from room to room meowing softly. 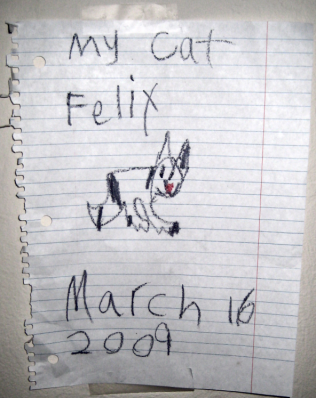 Felix was a part of our family.  We miss him a lot.