With Ula finally through the rigors of getting a book ready for her publisher, it was time to get back into Azeroth and back on the instance trail.  So there we were again, logged in on a Saturday night.

We decided that since we had been out of action for nearly three months, we might not want to start off with another run at Utgarde Keep.  So we stepped it down a notch, dialed it back a bit, and headed to the Outlands where we still had a selection of instances left uncompleted by our group.

We settled on the Steamvault as it was the next in line on our list of Outlands instances before Lich King came along.  It is rated for levels 68-70, so we weren’t totally out of the level range as a group and, frankly, while we have geared up some in Northrend, we are hardly uber.

Also, there had been some re-spec’ing done along the way, so it was felt it might be good to take it easy so we could learn our new abilities.  After some parsing through Elitist Jerks (along with Rohan‘s site, Raider101, for a bit more ret paladin info), Skronk, Ula, and Vikund all put together new skill tree allocations.  Ula went heavy on mage frost tree, Skronk went the priest discipline route, and Vikund changed to a retribution paladin.  Bung stayed where he was, though was going to look into things further.

The first hitch of the night came up when Earl failed to show.  We think he has gotten used to going to bed at a decent hour on Saturday night while we’ve been on hiatus.  So our group ended up being:

We thought we would give the instance a try even without out main tank.  It would at least be a learning experience.  So we headed in to the Naga and water elemental infested Steamvault.

Something Squelching This Way Comes...

We started off pretty well.  The mobs in the zone are grouped pretty tight together, but we managed to maneuver and pull pretty well.  Only once did we get in over our heads with the yard trash mobs when a group of three we were fighting turned into a group of nine due to a couple of bad fear spells cast on us.  That one was a wipe, but a near run thing, leaving a single, a single, and a double group to clean up after the fact.

Damage wise, we had improved.  Vikund and Bung were always over 600 DPS for fights while Ula was often at 700 DPS, though her overall DPS for the run was thwarted a bit by the water elementals that were all immune to frost.  Meanwhile Skronk was dropping great big heals on Vikund, which he needed, that had nice side effects like putting up a bubble on a crit.

We hit the first boss, Mekgineer Steamrigger, and cleaned his clock (heh) on the first try, with no casualties on our end.

The second boss, Hydromancer Thespia, was a bit more of a challenge.  Vikund went down towards the end of the fight, but mostly due to being rusty.  I completely forgot that I could use a healing potion or health stone in my hotkey bar.  I hate it when that happens.

By that point we had cleared everybody else out and had only the locked door to go through.  And behind that door we expected to find Warlord Kalithresh.  And maybe a few minions.

The minions came in groups of four and were, like much of the instance, tightly packed together.  We managed to pull each group individually and cleared them all out. That left us alone with the Warlord.

This fight is a bit different.  We had looked it up in advance of the fight, but did not quite “get” what was going to happen.  Two wipes drove home the point though.  Warlord Kalithresh fights in a room with what look to be sizable fish tanks around the perimeter. 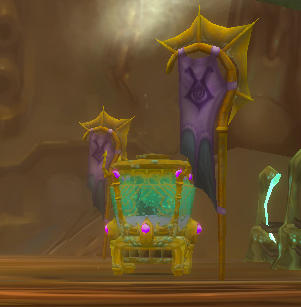 One Of The Tanks

During the fight, he will run over to one of these tanks every so often and start channeling.  That will last for 10 seconds, at the end of which he will get a huge boost to his damage and kill you all dead.  Or at least he killed us all dead when that happened.

So, between the time he chooses his tank and starts towards it and when the 10 seconds of channeling ends, you have to destroy the tank.  The tank itself has 10,000 hitpoints.  Once we got this bit and all focused our attacks, the fight was easy.  With three of us doing 600 DPS or better, the tanks were gone in six seconds or less.  Targeting the tanks was a bit of a pain, but we managed.

And so Warlord Kalithresh fell.

I actually really like getting the achievement pop after the last boss in an instance.

We lined up for our screen shot before the defeated foe. 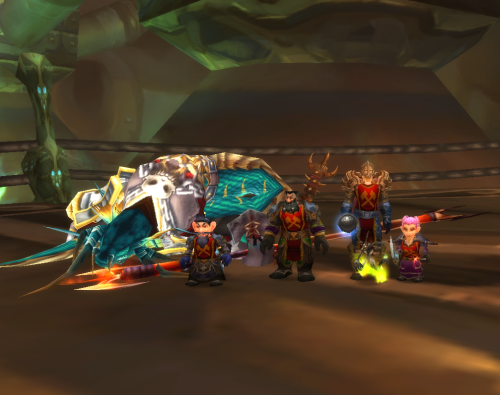 And then we ran off to turn in some quests.  We were not very diligent in collecting quests for the instance before we went in, but there were a couple we managed to pick up.  The equipment rewards were not going to replace anything we were wearing, but one of the hats from the quest The Warlord’s Hideout, the Hydromancer’s Headwrap, is right up there with Whitemane’s Chapeau as one of the hats I’ll wear all the time if WoW ever puts in an appearance tab like they have in EQ2 or LOTRO.

So we managed to get in, burn stuff down, defeat the boss, and get out without our tank.  With the tank we might be ready for another peek into Utgarde Keep.  We just have to keep him awake.