Instance group member Bung dropped the group an IM with a link to an article over at Ars Technica that refers to and sums up a report from Nielsen on The State of The Video Gamer.

Among the insights are:

That last number seems surprisingly exact.  It reminds me of the old adage about data from the United Nations, the more precise the number, the more likely it is to be based on BS.

Still, if that last number is correct, how does it jibe with the 2.5 million players in North America that has been attributed to the game?  That seems to mean a lot of women and Canadians are taking up the slack.

We are just dragging out this final showdown with Ingvar the Plunderer as long as we can it seems.  Utgarde Keep first appeared in a post here back in November.  Ingvar might die of old age before we actually slay him.

You see, Saturday night rolled around again and there were only four of us standing there in the Utgarde Keep foyer.  We were short a gnome!  Those on the scene were:

And as we sat there wondering if Bung was out for the night, we decided to take a peek into the instance, to warm up a bit against some real mobs. 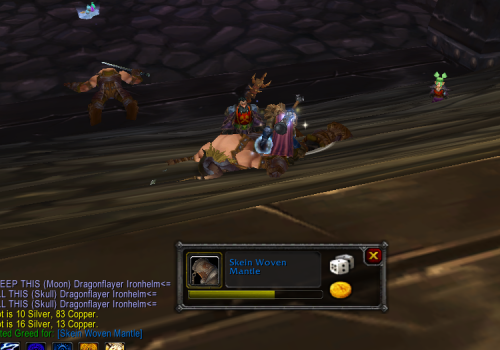 Blue on the First Fight

That seemed to be a good omen, so on we went, just to see how far into the instance the four of us could get.

We got through the forge, past the proto-drakes, and even managed to take out the foursome that stands before the first boss.

And there we were staring at Prince Keleseth.  He had been tough for us every time as a group of five in the past and Bung was still a no show.

Gaff logged in with his level 70 druid just as we were getting to Prince K and we thought we might have somebody to fill the empty slot in our party, but it was late for him and he had already had a long evening in EVE Online and just wanted to say hello.  Plus he admitted he was mildly disturbed to find that I had a character that was higher level than him, an unusual set of circumstances.

So we said good night to Gaff and pondered Prince K.   Since we were there, we thought we might as well give it a shot.

The first time we wiped, but it was close.  The wrong people got hit with the ice block to keep us going.  Being close, we decided to give it another run and on the second try we brought him down.

He was kind enough to drop Keleseth’s Balde of Evocation again, which proved to be an upgrade for Skronk.

After that we rolled along, cleaning up the groups of mobs, heading further into the instance until we were faced with the second boss fight with Skarvald the Constructor and Dalronn the Controller.  These two gave us a lot of trouble in the past, until we learned the trick of bringing the whole group close in for the fight.  That keeps Skarvald’s annoying charge attack at bay.  Even with a foursome, we smote the pair in one quick fight.

You can see Earl wearing the Arm Blade of Augelmir that Skarvald dropped.  A unique looking weapon.

After that we knew we were going to make it to Ingvar the Plunderer.  But would we be able to take him with just the four of us.

The answer was no.

We went at him three times.  We got close on the last two fights, close enough that we could see Ingvar’s remaining hitpoints would have been more than taken care of with the DPS Bung has been putting out.  But we couldn’t quite pull it off ourselves.

So we called it a night.

Not a bad night.  We did well as a group of four and ended up with three usable blue drops which, frankly, is three more than we get some nights.

It seems that you may have to read at least one more post about Utgarde Keep.  Maybe in a couple weeks I’ll actually have a post about us in The Nexus.