I was not the only one in our little guild feeling the post-Noblegarden achievement buzz, or so it seemed.  I logged on Sunday after our Azjol-Nerub run to find Skronk and Ula in the midst of an assault on Orgrimmar in search of an achievement.

They weren’t after Thrall or anything crazy.

When Blizzard introduced the achievements a lot of things that you might have done before they were part of the game did not get recorded.  That includes, for us, almost all of the instances we did.  So they were looking at the list that we were going to have to redo and saw one we had not done.  They wanted Ragefire Chasm.

Of course, the reason we had not done it is that the instance is located deep within Orgrimmar, one of the horde capital cities.  But, being a quiet Sunday afternoon, it seemed as likely a time as any to give it a go.

Getting to Ragefire Chasm involved stripping down to avoid damage to our equipment and running through Orgrimmar until we died.  Actually, we left our tabards on so as not to terrorize the local population too much.  Noblegarden bunny ears were also worn to give the whole thing a festive appearance. (Those bunny ears are the best head gear ever, even beating out my animal fur trimmed pimp hat in my opinion.)

Once dead, we would run back to our corpses, revive at an opportune moment, and run a bit further into the city, thus moving the ball forward with each death.

Our Route into Orgrimmar

Ula and Skronk had some bad luck inititally and only made it to about the auction house while Vikund, wearing tabard, bunny ears, and mounted on his swift Zhevra, made it all the way to The Drag before falling to the city guards.

Running back to Orgrimmar

It turned out that the corpses of Skronk and I ended up pretty close together, so we coordinated our next move forward.  He revived, bubbled himself, mounted, and raced ahead pulling the guards with him.  Then Vikund revived, mounted up and followed in Skronk’s wake.  We had a clear shot to the instance and were going to make it when Blizzard stuck it to us yet again.

Ula moved herself up in the chaos and we all ran back through the city and debated how long to wait until we revived.  Death would be quick as two guards were camping our corpses.  Skronk tried running into the instance as a ghost only to find that reset him back out in Durotar again, giving him the joy of running back to his corpse without actually having the fun of dying.

We got lucky though, and were able to get an instance to launch for us after only a couple of tries.

In the name of being sporting, we remained unarmored for our run through the instance, wielding only silly things, such as my fishing pole.  Okay, it is a pretty devestating fishing pole, but it does not allow me to do any of my special paladin weapon attacks.  Not that I needed it.  We area attacked our way through the instance, mowing down very low level elites until we came upon a bigger than average guy whose death gave us the achievement we desired.

Tradition dictated that we take our picture after killing the main boss, so here we are, attired for adventure in Ragefire Chasm. 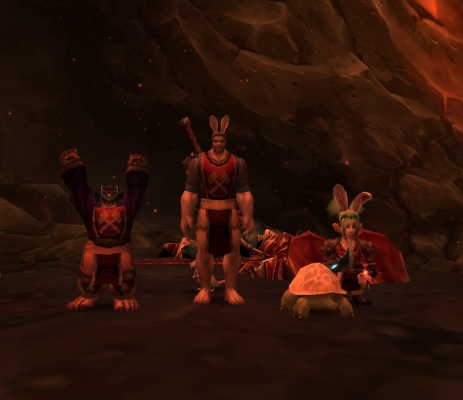 Now, if I had been thinking, I would have run over to some open water in Orgrimmar and quickly fished to get the achievement for catching a fish in both Stormwind and Orgrimmar.  But that will have to wait for another time.

We then went off and knocked out the Scarlet Monastery achivement.  We had done that instance ages ago, but it was in the pre-achievement days so did not get counted.  That run also let us pick up quite a few of the books you need to read for yet another achievement.  They were mostly in the Library wing, of course.

With Mother’s Day though, we did not do a Northrend instance last week and Earl has a couple of weddings to attend this month, so we will be on a short instance hiatus in WoW.  We’ll probably keep it light and work on some other silly achievements in the mean time.