We were back as a full group again last Saturday night, Earl having finished of the spate of weddings that sprang up in late May.  Our group, together in Northrend, was:

We had been sneaking away from Earl a bit in his absence, but not too much.  And now it was time to get back on the pathe to the Northrend instances.  Our target was Ahn’kahet: The Old Kingdom, which most people see to just call “The Old Kingdom,” no doubt because it is easier to say (or spell) than Ahn’kahet.

We had visited the instance once before, after our successful (and rather quick) Azjol’Nerub run a few weeks back.  We even made it to the first boss, Elder Nadox, but wiped on him a few times then called it a night.

But now we were back and in the mood to see the whole thing through.

The composition of creatures in Ahn’kahet made for some interesting game play: Elementals, undead, humanoids, beasts.  Essentially, Ula, Bung, Skronk, and Vikund each got to use their own brand of crowd control in various fights.  I suppose, technically Earl did as well… but then he always does, since the tank’s crowd control is called “holding aggro.”

We took it carefully coming into the instance, probably over-using crowd control, but keeping everything easy.  That got us to the first boss in good order.

We’d had three runs at Elder Nadox before.  While we did not bring him down, we knew what was coming and what we needed to do to defeat him.

Ah, Elder Nadox! We shall teach you a lesson you shan't soon forget!

And so in we went.  The routine with everything being immune to damage while his guardian was up was a known quantity.  Yet the fight ended up being a near run thing with only the healer and the mage left standing at the end.

Nadox did drop an interesting looking weapon, the Blade of Nadox.  Nobody really “needed” it, but we all bid greed just for the style aspect.  Bung ended up with it. 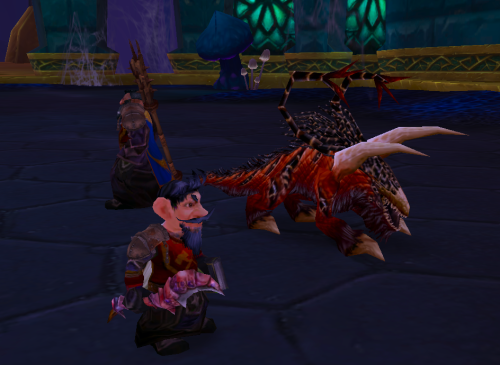 Bung and the Blade of Nadox

After that, the instance was all new to us.  Time to explore.

I will say that I do like the fact that the instances in Northrend actually have in-game maps.  That helped us along.  Ahn’Kahet is full of twists and turns and platforms and alternate paths.  Not that you can actually stray far off the correct path, but it sure looks like you could.  But when you try, you find you cannot go that way.  Invisible barriers block you.  Some of them keep you from taking short cuts.  If you could jump off platforms and such, you could probably skip Elder Nadox for one.  Most though seem designed just to keep you from doing something silly, like falling off the edge of a cliff.

It makes sense for the type of game that WoW is and given what we know about so many players.  We will often try to get to a place we can see just to see if is possible.  So you are safe from falls here, but you will never get to that strange altar in the distance.

Forbidden Altar... Forbidden to you, anyway

We moved along well enough.  The next boss, Prince Taldaram, was barely a speed bump once we figured out how to release him from his holding chamber.  He went down and we moved on through a tunnel into a whole new area.

At the itersection of those two beams of energy, at the base of the ‘V’, floats the next boss, Jedoga Shadowseeker.

Jedoga is an interesting boss fight, though just getting to her proved to be a challenge.  The floor between where we are pictured above (at the top of some stairs) and where she resides is swarming with groups of NPCs.  Clearing a path through that caused us to wipe once before we even got within site of Jedoga.

And then when we got to her, the fun really began.

We did our usual routine and took her on with no prior research.  As often happens, this lead to a wipe, but we sort of figured out what was going on.

Jedoga shows up, you fight her for a bit, then she floats up in the air, summons one of her adherents, whom I forgot to mention are all hanging around the fight area kneeling in reverence.  The adherent walks over to her, stands beneather her, and gets consumed, giving over his health to her as well as giving her a short duration, ass-kicking buff.

So the idea is to kill the adherent before it gets over to her, or at least knock down its health a lot, since the amount of health it has seems to be directly proportional to how big of a health boost she gets.  And if she gets the buff, stay out of her way until it fades if you can.

We failed on that last bit the second time.  Wipe.

Oh, and don’t run out of the battle area because a bunch of hostile NPCs will kill you.  The area is visually obvious, but that part about being killed only became obvious when Earl ran out of bounds while trying to avoid Jedoga during her buff.  Wipe.

On the fourth try we managed to stick with the re-revised plan and bring her down.  It wasn’t super easy, but it was managable once we knew all the steps.

She also dropped what was probably the most useful item of the night, the Cloak of the Darkcaster.

This actually led to a “need-off” between the casters, though I cannot recall at the moment who got it.  I remember when I used to take notes on this sort of thing.  Ah, well.

This left us with just Herald Volazj, the final boss, who has a nice little chateau on a floating platform (off of which you cannot fall as noted above), just off of Jedoga’s area which you reach by yet another spiderweb ramp.  Back in Azjol’Nerub we thought those spiderweb ramps were so cool, but we were already jaded by the next instance.  How difficult to please we are.

I peeked ahead at this fight, so we did not go in blind.  We knew that at two points we were going to be afflicted with insanity and have to fight shadow versions of ourselves, but that otherwise the fight was straightforward.

The first bout of insanity almost did us in.  We had a lot of trouble getting through it.  Oddly enough, the second round seemed to be no problem at all, we shook it off quickly and stuck it to Volazj in short order, giving us the achievement.

Which only left the usual last boss victory shot to be taken. 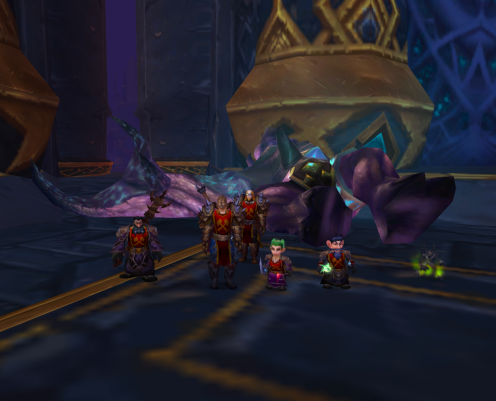 Victory in The Old Kingdom

Another instance down.  Next on the list: Drak’Tharon Keep.