I won’t, for example, buy the collectors edition of the game just to get a pet.  I also won’t buy a bunch of collectible trading cards in the hopes of getting a pet… or even one such card off of eBay as a sure thing.  Or is it just mounts you can get from those cards?

Apparently though, I will give PepsiCo my real name, address (postal and email), and date  of birth for a pet in WoW.

You see, PepsiCo, specifically its Mountain Dew… erm… Mtn Dew brand… and Blizzard have a cross-promotion going this summer.

It is a contest.  You can win prizes, anything from a T-shirt to a gaming laptop.  You can earn tokens which will, in turn, increase you chance of winning prizes.

I could even download a banner to put here that, when you clicked on it, would award me even more tokens.  But I won’t.

Blizzard has a FAQ up about it, though it doesn’t answer the magic question of who is paying whom for this promotion.

And because Mtn Dew is involved, you can drink some truly awful soda.

Neither health nor mana here

At least that is my opinion of the Mtn Dew Game Fuel flavors they have come up with for this promotion.

I had hoped against hope that PepsiCo would just use their Code Red formula for their red drink.  I like Code Red.  It is like a caffeinated Shirley Temple, which is about my speed.  Put it in a dirty barkeep!

Alas, it was not to be and they produced something that tastes like they dumped some canned orange juice into some perfectly good Code Red and ruined it.

As for the blue flavor… well… I have never had a really good experience with a soda of that color.  Snow Cones, Otter Pops, and, once, even an interesting blue gellato have been fine.  But sodas?  I once nursed a 16 oz. bottle of blue cream soda for three weeks, drinking it one sip at a time, because one sip was all I could take.  It was a good sip, but I was done after one.  I think I threw almost half the bottle out after the three weeks.  And that was my best blue soda experience ever.  So I’m not keen give the mana potion… erm… alliance potion a try.

But to get the pet you don’t even have to drink the soda.

All you have to do is register for the whole promotion at the Mtn Dew Game Fuel promotion site and click on a little button to claim claim your Battle-bot pet.  That is what I did.  Once you follow the steps, they mail the bot to all of the characters on your account. 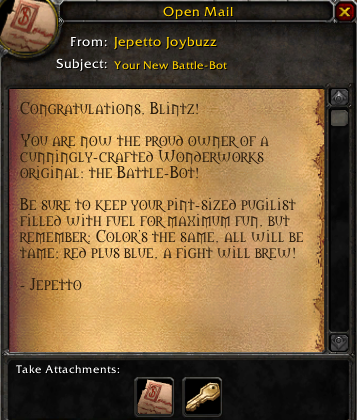 Of course, then you have to go back to the site every day and click on the button to get fuel for you battle bot.  You can choose either red or blue fuel.  When you pick a fuel and fill up your Battle-bot, it will automatically fight and Battle-bots that show up with the other fuel color, much the way the Clockwork Rocket Bot will engage any other such bot that shows up.

And, like the Clockwork Rocket Bot, the fights are over pretty quick.

But the Clockwork Rocket Bot works over and over, while the Battle-bot needs to be refueled after it dies or is dismissed, and you can only pick up five units of fuel a day.  And, Battle-bot fuel will only be available until the promotion ends, which it is scheduled to do on August 20th of this year.

Still, it is another pet towards that 50 pet achievement.  18 more to go with plenty to look into.

[Addendum: Since I wrote this up I have seen some one on one Battle-bot fights go on for quite a while, so they aren’t all quite as instant as the Clockwork Rocket Bot fights are.]

7 thoughts on “What Would You Do for a Pet in WoW?”