Last week I mentioned that one of the R&D agents which which I work in EVE Online had become oddly reluctant to speak to me.

Everything looked okay.  I had been using her as an R&D agent for some time.  My standing with her corporation, Viziam, was good.  When I checked the corporation agent list, she was flagged as available.  But when I flew out to her station, I was greeted with this:

In resonse to my post I was given some tips to check if I had done anything to hurt my standings.  Reatu Krentor suggested going to my standings page on my character sheet, right clicking on Viziam, and selecting “show transactions” to see if there was anything recent that would have negatively affected my standings.  There wasn’t anything.

Then Gunner came up with a web site about R&D agent standings that had an ominous quote from Apocrypha 1.2 patch notes.

Standings will now be calculated and displayed correctly when Connections and Diplomacy are applied to any character.

So there apparently was some change recently.

I went through the page which had a number of ways to check if your agent relationship was affected by this change.  But none of them seemed to apply.  Things just were not adding up.

So over the weekend I went back to the station where Eveh Pomar was based and saw this: 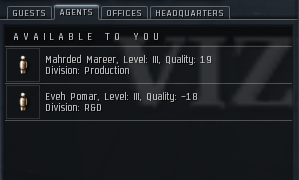 She was available to me again at the station.  I bought my datacores.  Did my little daily mission with her.  And then went on my way.

Mysteries of New Eden I guess.

4 thoughts on “Making Up with Eveh Pomar”