I have broken with the long standing American tradition of closing the barn door only after the horse has bolted.

Previously, when I was signing up with Battle.net I noticed that my account was also good for the Blizzard Store.  How convenient, I guess.  So I went leafing through the store and ended up on the page for the Blizzard Authenticator.  It was only $6.50 and I have read enough tales of people, even quite bright people, getting their account hacked one way or another, so I decided to buck the trend and get the authenticator BEFORE something like that happened to me. 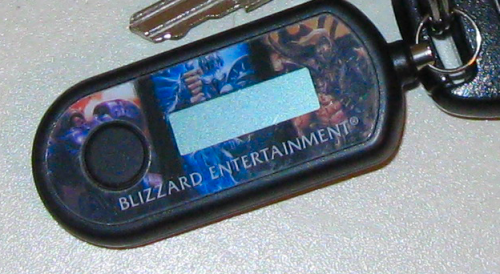 The unit has an overlay on it with what appears to be a Terran Marine, the Lich King, and something that might be Diablo related, but which looks more like a rather ugly minotaur to me.  Not that minotaurs and Diablo are mutually exclusive, but they certainly don’t leap to mind when I think of the Diablo games.  Or it could be something else.  In any case, I take this as an indication that I will be able to use this unit with upcoming Blizzard games.  Well, that and the fact that I need the authenticator to access my Battle.net account as well as WoW.

As the blurb on the Blizzard site says, it is pretty durable.  I have had it on my key chain and in my pocket for a few weeks now and it hasn’t been damaged yet.

Initially it came with a piece of adhesive plastic over the front, the way that so many electronic devices do these days.  This particular piece was stuck on so well that at first I thought it was part of the actual unit.  So when my keys dug a groove in the cover on the first day, straight through where the numbers show up making it tough to read, I was a little annoyed.  Eventually though I was able to separate the temporary protective cover from the actual authenticator.  The picture above is sans cover.

Size wise, it fits in well enough with the other items on my key chain.  It is a bit smaller than the remote entry fob for my Toyota and the who key mechanism for the wife’s Honda. 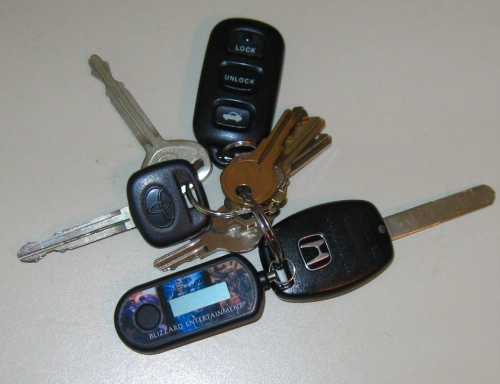 On the key chain

Using it is simple enough.  It is from Vasco, who makes a lot of such units.  It looks and operates very much like units we have at the office from time to time when we have to do work on secure customer networks.

With WoW, you log in as usual, then are asked for an authentication code in a separate window.  I tend to not stray too far from my key chain, or my key chain tends to not stray far from my computer in any case, so it hasn’t been much of a bother.  The only issue I ever have is that I tend to play in the dark and the unit is not lit in any way, so I end up having to read it off of the light from the monitor.

Once in a rare moment I log in right on the time boundary when the code changes and have to enter a fresh code.  But I am much more likely to make a typo entering the code than to hit that moment just right.

Having adjusted quickly to the extra security when logging into WoW, I wouldn’t mind having a similar device for other games, especially EVE Online.

Actually, what I would really like is a universal device that could be used with other games.  That seems unlikely to happen, at least in the near future.

Of course now I worry about losing the damn thing.

Not that this is the top worry in my mind, what with the economy and being a parent and so forth.  But it is a worry, about on the level of worrying about dropping something in the toilet if the lid has been left up.  Around our house we’re more likely to have a cat fall in the toilet if the lid is left up (one kitten dunked so far, and Oscar has fallen in a couple times over the years), but it has happened on occasion.  And I do tend to take care of things that have value.  I used to get a new watch about once a year because I would either break or lose the old one.  Then I bought an expensive watch and have been wearing it for the last 23 years.

I’ll probably end up dropping my keychain in the toilet now that I have written this.  Or my watch.  Or both.

I wonder if the authenticator is water resistant?  I know the watch is.

And how long will the battery last on the unit?  And will I end up playing WoW long enough to care?

11 thoughts on “About That Barn Door”