We last left our four adventurers looking for… well… adventure.  The cast for the evening was:

And while we had managed to knock off the heroic version of Opening the Dark Portal, that really wasn’t enough adventure for the evening.  We were looking for some place new to visit.

A plan was hatched.

A mage portal was opened to Theramore… did you know that mages can open portals to Theramore?  It was a surprise to me, as the place seemed something of a backwater location… all the more so since it is located on the edge of a swamp.

It seemed akin, to me, to a major airline advertising that they offer direct, daily flights to Los Angeles, New York, Chicago, and Emporia, Kansas.

Of course, if Emporia had a large dragon living on the outskirts of town, that might explain things.

Yes, we were headed to Theramore en route to Onyxia’s lair, the one-time 40 person raid instance that we were going to try to do as a short-handed instance group.  We had, after all, met Onyxia before.

And yes, I know that leet dudes solo Onyxia for kicks these days, but we felt that by going in there as a group of four we could help do our part to trivialize other people’s fond memories.

We had done a quick check to make sure we could get in to see Onyxia, especially after we were just thwarted at Zul’Aman and Karazhan.  It looked like we were clear to go.

So we rode across the Dustwallow Marsh to see the lady.

Getting in was a snap, and the four guards on the way to her lair were easily dispatched.

One of Onyxia's Guardians

Those out of the way, we turned the corner and beheld the dragon in her lair. 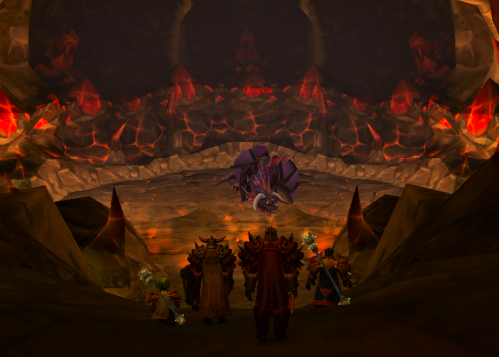 We had not read anything about the fight itself, so at least we can say we were going in blind, if over-powered.

Well, we thought we were over-powered.  A look at her hit points made us think twice… that and the fact that her level does not show.  Seeing her level displayed as “??” gave us pause.

Still, there we were.  We fell back on Plan A; there she is, get her!

So in we rushed.

Dragon fights are special, yet they do have their similarities all the way back to Tiamat in AD&D.  You have breath, you have claws, you have a honking big tail that will sweep you off your feet.  All that was in play as the fight started.

The first part of the fight went well enough.  We kept to our allotted positions for a dragon fight, we did a lot of damage, Earl kept her focus, and healing was never an issue.

Then we hit a point in the battle where Onyxia flew up and a host of her whelps began to attack us from either side of the room.  We took that in stride, killing the whelps, then waiting, then killing some more, then waiting.

We seemed to be at an impasse.  We expected that, once we had killed enough whelps, Onyxia would come down and play some more, but she seemed to feel that we were beneath he dignity, both literally and figuratively, so she flew around and we killed whelps.

After a while of this, we started taking potshots at her with whatever we had to hand; spells, guns, wands, anything with some range.  She started spitting fire now and again as she meandered aloft in her lair.  Chipping away, we made some progress in bringing her down.

As we did that, we noticed that when we got close enough to her, out melee skills would work despite the fact that she was flying around some meters over our heads.  Any port in a storm.  We took to chasing her around and beating on her.

It was a good thing too, as the casters were doing the brunt of the damage so were starting to attract a respectable amount of attention from Onyxia.

Eventually she settled down to our level and added some stomping and bellowing to her repertoire, cute tricks that sent us off into the whelps again for more fun. 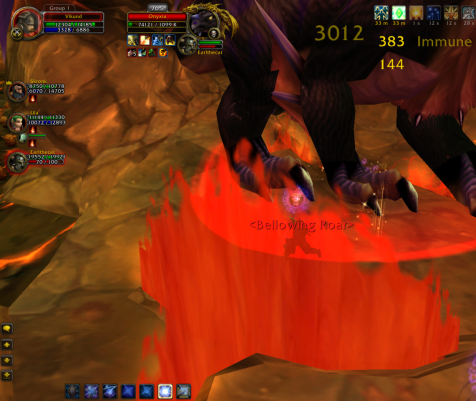 Onyxia back on the ground with us

Still, with her on the ground we were all over her.  Her time was at hand, though it had taken quite a while to get there.  We started the fight at about 5 minutes after the hour and she wasn’t dead until half past.  A 25 minute long fight is a rare thing for us.  There were a lot of abilities we can generally use once per battle that got repeated use this time around.

Once on the ground, the fight reached its per-ordained conclusion.

Onyxia was laid low and we stood in triumph.

This would have been really impressive a few years back!

Then came the loot.

And boy was there a lot of loot.  I realized, intellectually, that for a 40-person raid there had to be more goodies to hand out at the end than you would get in a five person instance.  Never having actually been on a raid in WoW however, I was surprised and awed at the pile of stuff Onyxia dropped.

Probably the most useful items were the 18-slot Onyxia Hide Backpacks.  There were two of those in the haul.  Other things were interesting, even good looking, but nothing worth using.  Except, of course, Onyxia’s head.

We had to get back to Stormwind to turn that in.  Skronk won the roll for the head, so he got to present it. 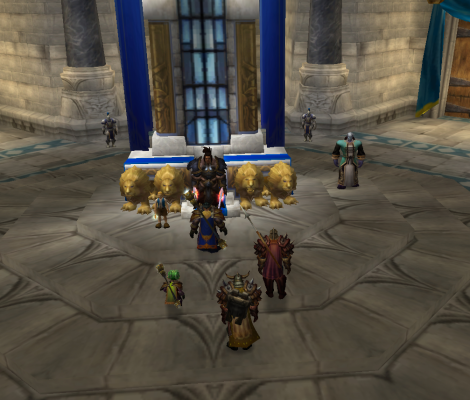 Sire, we have this head you see...

The king has better things to deal with, so he sent us off to Major Don Mattingly who serves as the dragon head repository in Stormwind.  It is king of like being a casino greeter, one of those things you can get after a successful career in professional sports.

Major Mattingly has his role.  With the head handed over and he shouted out to all of Stormwind,

Citizens and allies of Stormwind, on this day, history has been made.  Skronk has laid waste to that which had attempted to usurp the rule of the kingdom.  Gather round and join me in honoring our heroes.

Behold the might of the Alliance!  The dread lady, Onyxia, hangs from the arches!  Let the rallying cry of the dragon slayer lift your spirits!

At which point everybody in Stormwind got that buff.  See, we were doing a public service in slaying Onyxia!

We got the souvenir photo with the head of course.  Everybody does. 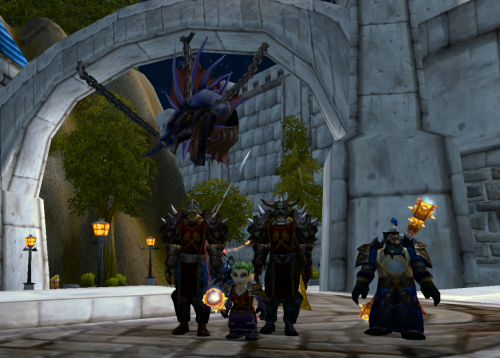 How to get a head!

After which, we called it a night.