Potshot and I are sitting in my 74 Plymouth Duster on a side street in Cupertino near a point we refer to as “crash landing.”  Our eyes are focused on a Citizen’s Band radio mounted under the vast black metal dashboard of the Duster.

Despite the cold, the passenger side window is rolled down and Potshot is holding out the window something that, from a distance, might be mistaken for a crude ankh.

The ankh is, in fact, a wooden “T” with a copper loop attached to the top.  There is a coax cable attached to the loop that runs down the length of the wooden handle and into the car.  It is attached to the antenna connector on the back of the CB radio.

It is a crude radio direction finder that Potshot made.

Potshot is rotating the loop while we watch the signal meter on the radio in an attempt to locate “Huey.”

So we weren’t doing very well.  We weren’t even sure “Huey” was still on this channel.  Maybe it was time to leave our observation and tracking point and cruise for targets.

And what are we doing out in the cold trying to track somebody’s radio emissions?

We are playing U-Boat.

U-Boat was the brainchild of our friend Bill.

I never knew if he thought it up himself or heard about it from somebody else, but he introduced the idea one day in high school.

The concept was simple.  A group of people with cars divide up into two teams and stalk each other in a pre-determined geographical area.

When you saw a member of the opposing team, you would flash your high beams at them to “sink” them for a point. 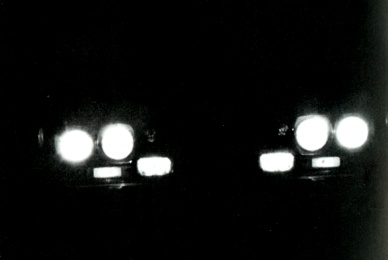 Of course, sinking neutrals was supposed to cost you, but you had to get caught.

You also had to have a CB radio in your car to communicate with your team and to eavesdrop on the other side.

Of course, to use a CB, you have to have a handle.

Huey got his because that was his nickname in any case.

Bill was Frogger, for reasons that escape me.

I got Mopar Mac because I drove a Plymouth, and the Chrysler parts division is called Mopar. (Allegedly standing for MOre Parts Are Required, reflecting upon the unreliability of Chrysler products.)

Potshot took Opus from the penguin in Bloom County, a popular comic at the time.  Somehow the penguin association stuck with him and for years afterward people who never played U-Boat or knew his handle would buy him penguin related gifts.

There was also Filbert, Binkley, Spock, Mr. 350, MCU, and Rice Burner among those who set sail in the game.

We started out with what seemed like a modest territory to cover and two teams of three cars each.

We quickly found out how difficult it can be to find three other cars, all in motion, in even what seemed to be a small area.  Subsequent games were often cut down to the area in the red square.

And still it could be difficult to spot the enemy.

Part of that was the nature of how we hunted.  Long stretches of time would go by where I was sure we were all laying in ambush, waiting for somebody else to drive by.  We would sit on side streets, wedged between other parked cars, in people’s driveways, waiting and watching regular intersections as they represented choke points.  This was gate camping in 1982.

Of course another issue was that we all cheated early and often.

We would run out of bounds and listen to radio traffic or try to get an RDF bearing on somebody. (It turned out that the crude loop antenna was formed in such a way that it focused 90 degrees off from where we assumed it would.  It was a bit more useful once we figured that out!)  Somebody once spent a good part of one game parked in a garage, broadcasting as though they were in motion.  Once in a while we’d just drive over to Jack in the Box for some food and let everybody stew.

We also had to work up codes for locations to coordinate with our team without letting the other side know where we were.  Of course, a good deal of disinformation went out over the air as well.

There were even attempts at camouflage.  I would get out of the car mid-game and unplug one of my headlights or the running lights so that  the headlight pattern that everybody had gotten to know would be a little different.

In the end, scores were rather low, even in our reduced hunting zone.  The roads just aren’t as crowded as you think they are.

For the most part we avoided irritating the neighbors.  Only once did we get entangled with the Sheriff’s department after “Mr. 350” roared past me, and the police cruiser in front of me, on the wrong side of Linda Vista in the 72 Camero with the 350 CID engine from which he took his handle.  Born with the gift of gab, he talked himself out of yet another ticket, nicely leaving the mic open on his radio so we could hear him do it.

Most nights of playing were slow.  Finding targets took patience and long stretches of time would be devoted to searching or laying in wait.  This is part of the reason we sailed with two people per vehicle most nights, the boredom.  That and the fact that not everybody who wanted to play had a car.

So the night would creep by as we hunted.  Every once in a while though, there would be a “YOUR DEAD!” cry over the radio and somebody would be sent back to base for a short duration.

There were, to my recollection, few if any disputes over who fired first.  There was no MILES gear / Laser Tag level of victory determination.  It was more a “Bang! You’re dead!” level of resolution.

We played U-Boat over the course of two years before it fully faded from our routine.  A lot of people came and played once, found it boring, and did not return.  After a while we got to a point where finding enough people became the biggest obstacle to playing and eventually we gave up trying.  There were more entertaining things to do on a Friday night.

But for a time there was a pulse of excitement when we heard somebody suggest that it might be a night for U-Boat.

[Warning: These memories are over 25 years old.  They may have shifted, settled, or mixed with unrelated events during storage.  Some of this may never have happened.  I will affirm however that Mr. 350 had a knack for getting pulled over and talking his way out of tickets and that years later I bought Potshot a 6-pack of imported beer solely because it had a penguin on the label.  I recall that the beer  was branded “Zele” and that it wasn’t very good.]

13 thoughts on “The Adventures of Opus and Mopar Mac”