I’ve been down with the flu for much of the last seven days so haven’t been keeping tabs on the gaming blogs as much as usual, but it seems that more than a few people have been getting themselves into a huff over the security implications of Blizzard making people merge their World of Warcraft accounts with Battle.net.

The argument has been made that using an email address is less secure than using an account name.

Which I would grant as true if we all just had one email address.  One we used everywhere, every day.  One displayed, perhaps, on the front page of one’s blog.

Honestly though, I have to think a bit to come up with somebody with just one email address these days.

My mom has more than one email address. (She reads this blog! Hi mom!)

My wife has more than one email address. (Another reader! Hi sweetie!)

And me? Don’t get me started.  I have a domain and essentially an unlimited supply of forwarding email addresses that can be as complex as I can stand but which will still show up in one of my in boxes.

The only person I can think of for sure with only a single email address is my daughter. (Not yet a reader)  But she does not use it, because it was only created to use for her Battle.net account so I could merge her WoW account.

Email addresses are plentiful.  Creating one that you don’t use regularly is simple.

And if you are itching at this moment to write a comment telling me the you have but a single email address, let me save you the trouble and direct you to Yahoo! and Gmail where you can create a new email address for free.

But I did think of one possible flaw.  What would happen if you decided to use that email address at a later date?  Or maybe you accidentally used that “everybody knows it” email address for Battle.net and now regret it?

I merged my account months ago to get on the StarCraft II beta list and to use the Blizzard Authenticator.  If you’re going to make security and issue but don’t use the authenticator, I’d have to question your commitment to the proposition of security.

And you don’t even have to buy the authenticator. (Which appears to be in stock as of this writing and on which  I doubt Blizzard makes very much margin at all, to bring up two things I’ve seen mentioned more than once.)

They make versions of authenticator for phones, and not just iPhones.

Really!  There is a version for my crappy old Kyocera phone on the list.  I was surprised when I went and looked!  The list of supported phones is pretty big now.

I went to Battle.net because I was pretty sure I remembered an option.  And I found it. 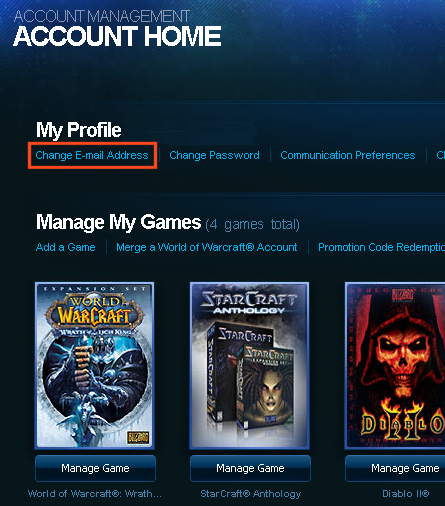 Oh, look, you can change your email address.

So you can change both your logon and your password as regularly as you like if you are security conscious and still find reason to eschew the authenticator route.

That would seem to me to actually offer more security options.

And, because somebody is going to ask, yes that option actually changes your logon, not just the email address at which you receive notifications. 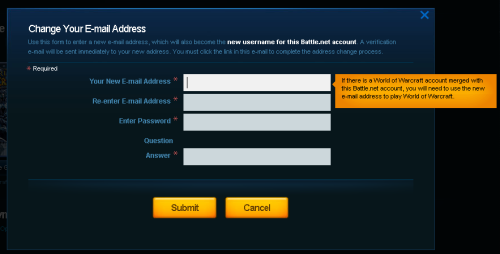 A look at the email address change screen

So some of the rants on the security implications seem a bit over blown in my opinion, if you are concerned about security.

That last bit is the key.  If you are not concerned about security, your current account name probably falls into one or more of these categories:

And if that is the case, the move to Battle.net is probably just maintaining the status quo for you when it comes to security.

So did Blizzard blowing the lid off of security with this move?  I don’t think so.

On the other hand, Tobold’s prediction of general support line mayhem on November 11th is about as close to a sure things as I can imagine.

And it will be a double disaster.

Not only are people going to swamp the phone lines and bring down the forums, but Blizzard is forcing people to actually THINK about their accounts.

When companies make their customers do that, some non-zero percentage of those customers will up and cancel their subscriptions.  It always happens.

So this is going to cost Blizzard.  I hope their plans for Battle.net are worth the pain they are going to have to endure.

I’d even worry about how Battle.net is going to behave come November 11th.  What is going to happen when a few hundred thousand people suddenly create accounts and try to merge their WoW account.

So, mom, go merge your account over this weekend.  Give me a call if you have any questions.  When you do merger your account, you’ll get a pet penguin in game.  I already got mine.  Your granddaughter has one now as well. 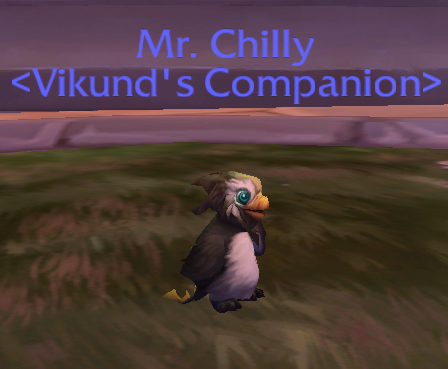 Mr. Chilly is some sort of northern Kalimdor penguin I think, and should not be confused with Pengu, who is from Northrend and a hatchling of the race of King Ping.  Pengu can only be bought when one has exalted faction with the Kalu’ak. 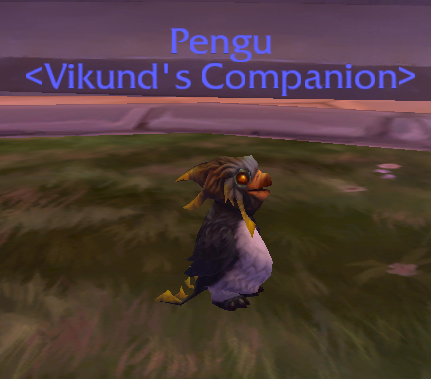 I understand that Pengu is going to get some red-eye reduction in an upcoming patch.  I just hope he doesn’t end up looking like his distant cousin, Mr. Chilly who has the potential to become the most ubiquitous pet in the game.  Everybody who converts to Battle.net gets him, and everybody has to convert.  Only those who delay too long may not get him according to the Battle.net FAQ:

However, please note that we plan to remove the ability to get the penguin pet at some point in the future.

I’m going to guess that the “point in the future” is reasonably far out, lest they get yet more support phone calls about why people didn’t get their penguin.