It has been a while since we last went through Shadowfang Keep.  A little more than three years have passed since our first and second runs with the group.

But the memory of the instance remains.  The memory of a tough slog through some densely packed areas where crowd control was a must and accidental proximity pulls were a fact of life that could lead to a wipe.

The instance has been reset since then, the level range lowered to put it more in line with the area in which it resides.

In addition to the change, memory can be tricky.  I’ve been wrong enough on things that I just knew I remembered perfectly to know how memory can drift and change.  Fortunately, I have those old posts to remind me of what I thought about the instance at the time.

Here we were to relive the Shadowfang Keep experience.  Oddly enough, we only seem to be able to get four players together for this instance.  This time around it was:

Hurmoo and Azawak made their way to the instance to summon people, Hurmoo also poised to scare people by popping out of cat form to reveal his horrible visage.

However, there were no people to scare besides our group.  No fellow horde players were hanging out by the instance nor were there any groups of alliance players to stalk and slay there at the stone.  It was just us.

So we rounded everybody up and went inside.

Early in the Instance

We noticed a change in things almost right away.  The density of NPCs appeared to have been reduced.  Getting to the horde NPC that gives access to the courtyard and the rest of the instance went very quickly.  The alliance NPC is a mage and opens a portal to leave once he unlocks the door for you.  On the horde side you talk to a rogue who unlocks the door (picks it?) and then just runs off.

Not quite as dramatic.  On the other hand, the guy opening the portal to leave left me feeling like he was saying, “So long, suckers!”

The door open, we started in on the courtyard.  This seemed about as densely populated as before and, despite being at the high end of the level range for the instance (a good thing, since there were only four of us), we managed to get a couple of adds from wandering NPCs.  Nothing we couldn’t handle, but I could see a group at the low end of the range getting in over their heads pretty quickly if not careful.

The nice thing about Shadowfang Keep is that there is no shortage of bosses to kill, so there are plenty of blue drops to be had.  Everybody in our group ended up with at least one blue upgrade to current equipment, and we disenchanted the rest to support the guild enchanter, Hurmoo. (Who will be able to hand out weapon enchants next time.)

We did not clear the courtyard.  Rather we drove a path though it to the kitchen door, avoiding our past mistake of going up the rampart.  There we took on Razorclaw the Butcher and then, in the dining room, the ghost of Baron Silverlaine. 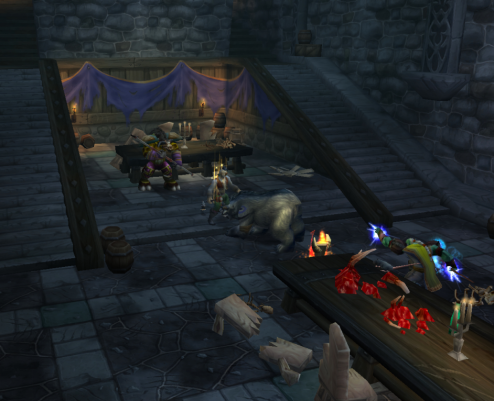 From the Baron we headed upstairs to Commander Springvale, another ghost still hanging about since the worgen took over.  His room seemed a bit less crowded than before.  But it was after him that we began to notice larger changes.

Up on the ramparts of the keep we were… well… almost alone.  A lone group and a singleton patrol on each segment seemed to be the extent of the guard force.

And from the ramparts forward we noticed that the population of the instance had been significantly reduced.

There was a point when making our way towards Fenrus where we suddenly remember how there used to be groups of four NPCs that had to be taken as a group, made memorable by the fact that we managed to use three forms of crowd control for several pulls. (sap, polymorph, and shackle)

Those groups and the tricky pulls they required have been pared down.  We plowed on through to Fenrus.

Fenrus gave us a little surprise.  The fight wasn’t tough, but just last week we had been talking about how the Deadmines had the surprise patrols that were triggered by killing certain bosses.  Of course, at the end of the Fenrus fight you get a similar surprise.  So it isn’t just the Deadmines.

Still, I wonder why those little tricks faded from instances.  Or is my memory failing me again?

We got through and eventually had the final boss, Archmade Arugal in sight. 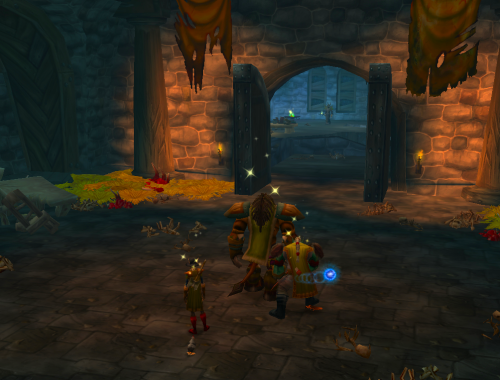 There he is, through the door...

As part of the rescaling of the instance, he went from level 26 to level 21.  While he can be a challenging fight at level, having a couple levels boost on him (despite being short a person) was enough to take the sting out of this fight.  He did his teleporting routine, but as they say, “You can run, but you can’t hide.”

And there we were, standing over the corpse of Arugal.

If you look carefully, you can see the Enaldie’s Ancona chicken behind her legs in the picture.  I found this amusing because, back in our earlier runs, her alliance side character, Ula, had that very same pet out for the victory shot. (Not to mention that I just got an achievement by getting that very same pet.)

Arugal left behind his robes, which would have probably made a decent upgrade for Bigbutt, but he was otherwise occupied. (Ironically, he was only a couple of miles from my home, but was with relatives for the Thanksgiving holiday, so couldn’t slip out to come play.)

So we made it through the instance without a death.  Healing with Hurmoo went okay, though we were never in much trouble at any time.  Easing back into the healing thing is good, since I haven’t played a healer much since the early EQ2 days.

The instance itself has clearly been nerfed since we last ran it.  The level range was reduced and NPCs were culled out of some spots to make pulls and proximity adds less of an issue.  Given that this is probably the second or third instance most people will have the opportunity to run, that probably isn’t a bad thing.

A bigger effect on the whole thing is the leveling curve in the game.  We’ve almost leveled ourselves too far above the targets for some instances doing little more than running instances.  Wailing Caverns, Deadmines, and Shadowfang Keep all overlap in levels, so doing all three without out-leveling them is tough.

Which brings up the question of the next instance to look at.

Do we go through Blackfathom Deeps where we are, again, getting towards the high end of the level guide for the instance, or do we skip that and go after Razorfen Kraul?