Hah! I bet nobody has ever made that play on words before!  Bow down before my originality… or something!  No, stay away from Google, just take my word for it.

We decided to skip over Blackfathom Deeps and head into something more challenging for our level range, Razorfen Kraul.  Again, we’ve been there before, but it has been three years.

Razorfen Kraul is marked as being for levels 24-29 so we thought this might be a better test of how we were handling our new classes and roles in the group.  Our lineup for the night was:

So as you can see, we were all at the low end of the range.

Azawak spent some time before we joined up getting all the quests for the instance identified.  The only one he could not grab in advance and share was Blue leaf Tubers from Ratchet.  When you get that quest you have to pick up three items that are next to the quest giver.

Back in the day it was pretty easy to get that quest, not read it until you ran off to RFK only to find out you were missing key elements to the quest.  It is certainly different in that regard from many WoW quests, which generally place the items you need in your bag.

These days all quest related items sparkle, so it is a little harder to miss the three items, but you can still manage it if you are in a hurry.

As people were grabbing that quest, I was running around the meeting stone and nearly got myself killed.  On the mini map there was a quest showing over by the great lift.  However, as I approached I moved from the Barrens, horde territory, to Thousand Needles, which is contested territory.  That flagged me PvP.

And, as luck would have it, at that very moment, an alliance player who was in the level 80 range judging from his gear, came up the lift and started killing all the NPCs including my quest giver.  Fortunately, he didn’t seem to see me right away, so I dropped into cat form and prowled off to a safe corner until he ran off to plunder the Crossroads or some such.

Azawak popped back on at about that point, also flagged PvP because he had also been lured over the zone line by the quest giver.  Have to remember that.

We started summoning people in as they grabbed that final quest in Ratchet.  Then the remainder were shared out and in we went.

We were quickly reminded just how fast that quillboar dying squeal goes from novel to annoying.  Well, you only end up hearing it about a hundred times in the zone.

Things started out very well for us.  We headed right, which turned out to be the correct direction, and aside from some stickiness around Death Speaker Jargba, things went smoothly.  Around Jargba there is an odd elevation issue, where you are in a half-height canyon at that point so if you get to close to the walls, you will aggro mobs along the side who will come running to get you, bringing along their friends.

We had a frantic fight at that point, but nobody died.  The healing druid was out of mana completely at the end though.  After that, it was a short walk to Jargba himself, then onward.

Following the winding path, we eventually ended up at one of the quest goals, Charlga Razorflank.  She is not a humanoid, but rather classed as “The Crone.” 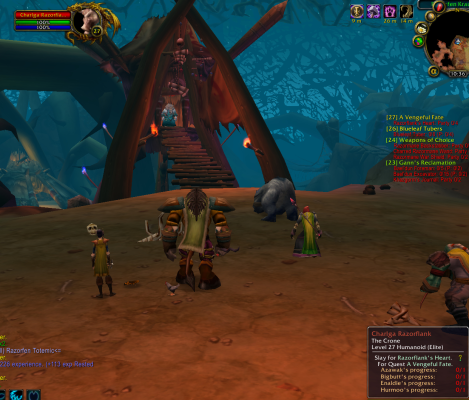 She was also lower level than I expected.  In fact, all the bosses seemed to be, relative to our last trip.  RFK seems to have been adjusted down some.

So the fight with Charlga was short and sharp, and she died quickly.  But to taunt us, she dropped a scroll that starts a quest, but which was too high of a level for us to start.  You need to be level 28 for that.

With her down, we stood on the cliff edge, looking down into the canyon where the blue leaf tubers can be found and where the final quest for the instance, an escort for Willix to the front door, kicks off.

Looking down towards Willix

And as we were looking for the right spot to jump down, we realized we had forgotten the main boss in the instance, the big pig himself, Agathelos the Raging.

We quickly doubled back and found him. 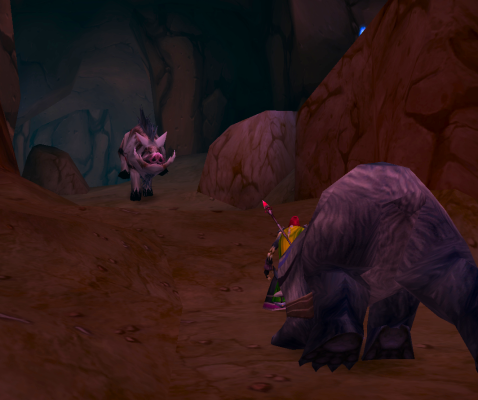 Not as big as that bear's butt

He was soon so much fodder for the meat case at your local grocery store.  Hmm… bacon!  And slaying him gets you the achievement.  We could have stopped right there!

But we didn’t.  We still had work to do.

We went back to find Willix.

We decided to clear the who canyon before we started the escort and pick up some of those blue leaf tubers along the way.  Out came the gophers as we started to clear.

Of course, in a short time, the gophers got us into a fight for our lives.  You let the gopher go (and why is it gophers?), whack them with the wand, and they run off to find a tuber.  Some times they find one close to you, in an area you’ve already cleared.

And sometimes they decided they really need to go grab a tuber on the other side of a half a dozen elite boars.

A gopher induced multi-boar pile up caused our only death for the evening, when Bigbutt went down to a fresh wave during a fight.  Hurmoo, finally having remembered to buy reagents before the run, got to do a combat ress, a first for our group.

Best emote from the boars in the canyon:

Raging Agam’ar goes into a rage!

Eventually though, all the boars were cleared and all the tubers required were obtained.  Then it was just a matter of walking Willix to the entrance of the instance.

Of course, they expect you to clear before you escort, so there were the inevitable “boars out of nowhere” events as we tried to hurry him along to the door.

Eventually though he was delivered safely, his quest completed.  He stood with us for a final picture. 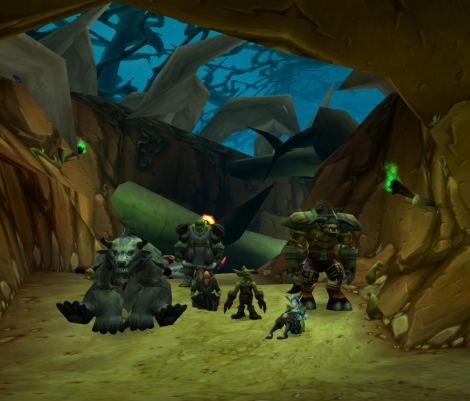 The instance itself was not nearly as challenging as we thought it would be.  I don’t think we’re that good with the characters yet that we should have rolled over everything quite so handily.  Then again, I can’t say that the place was a nerfed relative to the level we were.  It just seemed easier.  We couldn’t possibly have just learned how to do instances in three years of trying, could we?

On the other hand, we seemed to be the right levels to gain the maximum experience.  All of us leveled at least once during the run and I think we all leveled again by the time all the quests were turned in.  Earl got his mana totem, so we should be better covered on that front going forward!

So we have to ask ourselves again, do we hit the next instance in line, Gnomeregan, or do we skip over that and head straight to Scarlet Monastery?

Of course, we might skip both for a bit to go back and try the new level 80 instances that came with patch 3.3.