I actually got a few links from sites outside of the norm.

WoW.com pointed my way for the first time, which is saying something given how many WoW blogs there are, when they posted the Lich King Casino Royale Style video.

Then Binge Gamer’s The Bender Podcast mentioned and linked to me two times running with regards to Star Trek Online pre-order items.  I should probably go listen to what they actually said.  I just haven’t had the time.

I also got a shout out on the Multiverse Podcast.  Thanks guys!

And, in addition to all of that I got a nice note from the local and litigious  Erik Estavillo thanking me for linking to his site and offering to let me interview him if I liked.  Interviews are not really my thing, but I thought I would mention his willingness in case somebody else wants to pick his brain.

Last December seemed to be all about the micropayments and the like.  Sony Online Entertainment surprised some by putting Station Cash driven stores into EverQuest and EverQuest II.  The selection wasn’t great and the pricing seemed a bit off, but I was more interested to know what other SOE products would get the Station Cash treatment.

And then EA announced that Star Wars: The Old Republic would be microtransaction financed.  Or maybe they didn’t.

In EverQuest II I ran Reynaldo Fabulous from creation to level 50 in an very short (to me) stretch of time.  And then I stopped.

In Azeroth we were still coming to grips with the Northrend instances.  In Utgarde Keep we managed to kill off Prince Keleseth, but couldn’t hold it together to finish the instance.

Meanwhile, somebody was working on a WoW code, akin to the old geek code that used to clutter many a .sig file back when Usenet was cool and we knew the spammers by name.

I actually found some time to play Lord of the Rings Online.

And on the MUD nostalgia front I was reminding people what quests used to be like and sharing some really bad limericks.

The following sites have been kind enough to link here.  Please take a moment to visit them in return!

Most Viewed Posts in December

Nothing.  Really, I’ve done nothing but change skills for the last month.

Oh, sure, I flew around in my Zephyr long enough for a screen shot or two, but that was about it.

As I said in my other post today, I think EverQuest II has ceased to be an active and viable game for me.  My heart just is not in it any more.  And I cannot even got back just to play with Verteran Rewards anymore.  They fixed the counter so that as of some point in mid-2009 it only adds the days you are actually subscribed, not just the days since you created your account.  A pity, since that was something that actually coaxed me back regularly.

Station Access lapses today, so I’ll have to indulge my nostalgia quickly.

I’ve pre-ordered from GameStop so I’ll get the classic Enterprise as my bonus.  Plus I went the collector’s edition route.  I am a sap that way.

The instance group has been big on the horde side of things this month.  Meanwhile my mother, my daughter, and I have all finally hit level 58 and can now proceed to the Outlands.

The Wii has seen a bit of a revival after a dormant summer.  Rock Band livened things up a bit, plus my daughter has been interested in going to back to some of the LEGO games.  We’ve been working our way through LEGO Batman again.  Catwoman is my daughter’s favorite character.  Mine too, but for different reasons I’m sure.

It will be a new year soon.  That means some predictions of some sort in the January 1st tradition.  Look for them tomorrow.

Meanwhile, Star Trek Online will go into open beta in January.  I’m sure I will have something to say about that.

And, of course, there is always WoW.

This is one of those posts that would be a lot more effective if I had gotten around to doing a post early in the year about what those goals were.

I started on that post, but never quite got around to putting it up.  I have the draft still sitting around, so I’ll work from that.

Cap Out In WoW – Completed

I wanted to hit the level cap of 80 and, with the instance group, finish out all the base five person instances.

We managed to do that by August.  In fact, I have two level 80 characters, one of which leveled through instances and another who did so through questing.  So I do feel I got quite the tour of Northrend and ingested a large dose of WoW lore, which comes in quite concentrated form in Wrath of the Lich King.

Blizzard has added some more content for the instance group since I hit my goal, but that will be for next year I think.

I started new characters on a new server, ran one up to level 30 or so, then did not get much further.  The closest I got was Rivendell.

Take a Year Off from SOE – Mostly Complete

After my late 2008 run to level 50 with Reynaldo Fabulous, I was feeling quite bored with EverQuest II.  EverQuest I only visit for nostalgia purposes, and there are no other SOE games to which I feel any strong attachment.

So I thought I would just take a year off from SOE.  Maybe that would make Norrath seem more fresh.

I came back a little early to attend the Revelry and Honor anniversary bash, but really haven’t felt like logging into EQ2 (or any other SOE game since I had to invest in a month of Station Access to make sure I could play the characters I wanted to during my time on).  Even my daughter, who wants to see Frostfell Village every Christmas was done running around there in under 15 minutes.

EQ2 might have gone from “games I play” to “games I used to play” and become one for the nostalgia list.

Double My ISK in EVE – Complete

In EVE Online, I wanted to double my ISK holdings and buy a freighter.  I managed to buy the freighter and more than triple my ISK reserves as measured from the start of the year.

Now I have a whole bunch of ISK and no goals.

More of a blogging goal than a gaming goal, but I blog about games, so they mix.

The idea here was to limit myself to a maximum of two comments on any post on another blog.  After that point, anything further I had to say would have to come in the form of a post on my own blog.

The reasoning behind this was:

The first is easy to see.  It happens all the time.

I think the second is obvious, though often only after the fact.

The third though, is a bit deeper.  Like most people, I imagine, my comments on posts tend to get a lot less thought than things I post on my own blog.  By limiting myself to two comments (one to express my point and one clarify anything I might have not stated as clearly as I would have liked) I felt I would force myself to think more before I commented.  I thought perhaps it might drive me to greater clarity and less confrontation.

Or at least it might make for a few more posts on my own site.

In the end, I managed to mostly stick to two comments.  I think I only violated that when somebody grossly misunderstood what I was saying and I had to back and point out that I was actually agreeing with that person and was, perhaps, not as clear in that statement as I should have been.

I’m not sure I gave them all more thought because of my limit or if I just took two cheap shots and called it a night.  It did lead to one of my more creative posts of the year though.

This goal, of course, did not apply to comments on my own site.  In your own home you get to do as you like.  This was about being a better person in the homes of other people.

I’ll have to think about what I should shoot for in 2010… and maybe even post about it before next December.

How about you?  Did you have any gaming goals for the year?

It currently looks like the only in-game item that European players will get that we in North America won’t is a Starfleet Shuttle, which is available if you order via GameStation.

On the flip side, it looks like Europeans won’t face quite the myriad of conflicting choices if they pre-order. There appears to be no Constitution Class ship option, for example. 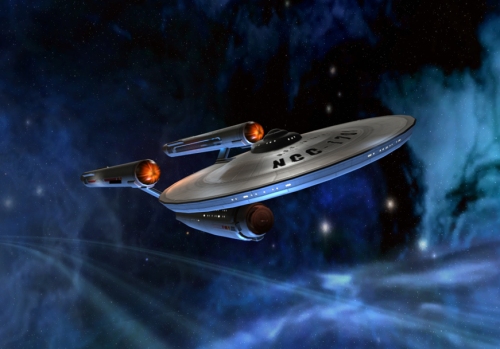 Only available in America?

On the other hand, their special Gold Edition (Collector’s Edition?) includes a T-shirt and a map of the Star Trek Universe.

That is all I have seen on the subject so far.  Has anybody seen anything else?