Cryptic has announced the first post-GA content to be added to Star Trek Online, and The Borg figure highly in their plans it seems.

Expect a lot of contact with the Borg in Star Trek Online. An entire “season” of Episode Missions is dedicated to combating the Borg and managing their influence on the universe. In addition to squaring off against the hive mind, you’ll also have to contend with other factions that attempt to utilize or work with Borg technology to achieve their own ends. You may even find yourself making friends with enemies to work against the great threat the Borg pose. 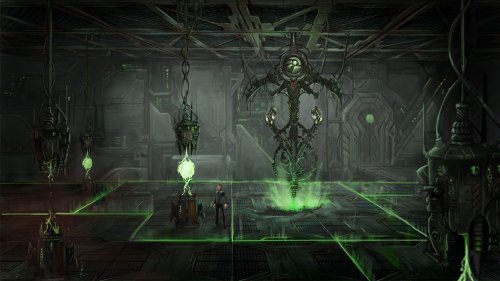 The Borg are an implacable force. They are, or were, one of the greatest threats the Federation has ever faced.

To call the Borg a race would be inaccurate. To call them a plague upon existence might possibly be understatement. They are cyborgs, biological life “enhanced” with technological advancements. They target and assimilate other races they deem of worth. Sometimes they choose their victims because of a technology they want to get their hands on. Sometimes they target interesting biological traits. Always, they target any race they consider a threat.

Assimilation entails a complete loss of self, of individuality. It destroys entire races. The assimilated become a part of the Borg Collective. Among the Borg, there are no individuals and the Collective rules all. The only possible exception to this is the Borg Queen. It is unclear whether she rules the Borg hive mind, or whether she is merely an instrument of the Collective.

The lack of distinct identities makes the Borg an uncanny opponent. They have no personal fears, no emotional weaknesses. They are also quite willing to sacrifice tremendous numbers of their own, because there is no true loss. Add that to their vast amounts of technology and they become nearly undefeatable. Nearly.

We almost lost the Earth in their first fully fledged attack against us. Since then, we’ve faced them several more times. The starship Voyager in particular came into contact with them repeatedly, thanks to having been stranded in the Delta Quadrant, which we believe to be where the Borg originated.

Thanks to the work Voyager did, we have far more information about Borg technology. It may be that Voyager also damaged the Borg and their transwarp hub severely enough during their last encounter to destroy the Borg. Or, at the very least, set them back several centuries.

Certainly that was the reasoning behind dissolving the Borg Task Force in 2385. I find myself less sanguine about this conclusion than many of my peers. Recent information leads me to believe that the Borg are not so quiescent, and that we may soon have cause to regret our complacency.

While the Klingon Empire gets straight to the point:

The Borg are a plague. Pasty white bastards, with their Collective. They have no bravery. Where there is no self, no burning desire to live, there is no courage. If you don’t even know what fear is, then you cannot conquer it!

They also have no honor. The Borg may offer their hands in treaty, but never doubt they shall turn on you should it benefit them!

We have not seen the Borg in many, many years. But we do not delude ourselves. Never trust an enemy is gone until you have shattered his bones in the wreckage of his own home. Besides, I have heard things. Rumors, if you will, that they are infiltrating the Alpha Quadrant. They’re cunning. Cunning and untrustworthy. If they are here, and I have no reason to believe they are not, it will be a grand fight to destroy them.

There are, of course, screen shots out there about this new content along with this video:

Coming soon to a star system near you!

We gotta run, run, run to Uldaman!
And then we gotta run away!

-A song I am going to finish writing some day

Travel turned out to be the word of the evening as we headed back to Uldaman, the site of an epic and fulfilling victory nearly three years back.  The chronicles of that event are assuredly the stuff of legend.

Or so it seemed back then, when we went in there as a group at level 44 and struggled to defeat Archaedas.

Who are we sending against Archaedas this week?

We’ll call the level gap about 5 levels on average across the board between then and now.  You can probably predict how this is going to turn out if you’ve been following our exploits on the horde side of things of late.  But I will still log it for posterity.

First we got out to the Badlands.  No dungeon finder for us yet.  The lead in quests for Uldaman require a few items just outside of the instance.

Being a section of mines that was non-elite, this wasn’t a huge challenge… well, the fighting wasn’t anyway.  Finding our way around was a bit of a trick as we tried to remember exactly where stuff was based on a nearly 3 year old experience.

We did get a little taste of PvP while we were doing this segment.  While we were heading in we got a bit spread out and ended up walking in file with quite a bit of space between us. (Keep your interval!) Azawak, out in front, turned a corner and ran into a level 42 alliance rogue who promptly set upon our tank.

And then Earl came around the corner and started to pound on the rogue.  Then I made the turn and dropped a heal on Azawak.  By the time Enaldie got there things were pretty much settled and Bigbutt only got to see the resulting rogue corpse.

The rogue decided to stalk us and see if he could catch use tied up in a fight and get his revenge.  We killed him twice more and he decided to steer clear of us.  But then we stumbled on him attacking another horde player and felt obliged to stomp on him again just to support the team.  And he was a night elf.  Hard to resist that.

Stomping on the alliance

We caught sight of him once more, but he decided to go the other direction and we were happy enough just to let him be if he wasn’t right on top of us or attacking horde players in our midst.

After picking up the required items, we got the newly level 40 Bigbutt to portal us first to Undercity and then to Orgrimmar to turn in quests and pick up follow-ons.  From Orgrimmar we then used dungeon finder to get ourselves into Uldaman proper.

However, the quest update we needed wasn’t very far into the instance, after which it was back out and to Orgrimmar.  And then from Orgrimmar back to the Badlands.  And from the Badlands, back into Uldaman via the dungeon finder to get to the meat of the quest line; kill everybody with a name and take their stuff.

And so we moved through the instance, which did prove somewhat challenging at points given our level.  In the area around Grimlok, the troggs were laying down some hurt on the group.  Hurmoo had to wake up and heal for real!

Fortunately HealBot, which proved no panacea for noobishness earlier in the day, worked out quite well.  I had not bothered to configure it, but the default druid settings worked well enough, especially when I actually had to drag out the big heal on a couple of fights.

That’s when I know we’re actually facing some resistance, when regrowth doesn’t make the cut and I actually have to use healing touch.  And when I have to hit somebody other than the tank with healing touch, then we’re really in a fight.

HealBot seems to be a keeper, though I will have to figure out how to change one of the defaults.  It comes with mark of the wild as one of the mouse button sets, but I would much prefer to have abolish poison on that button, since that is much more useful in a fight.  I’m sure that is configurable somewhere.

We took care of Grimlok in a chaotic fight when we forgot that he was just around that corner and walked into him without clearing some of the additional bad guys.  Well, our aggro radius did that for us, but we won.

And that cleared the way for us to head down to Archaedas. 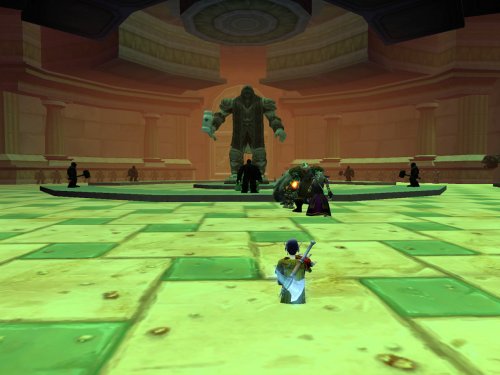 Archaedas is an event, that we well remembered.  We picked our spots.  Azawak was to dance with the big guy Hurmoo kept him alive.  One DPS stayed with us while the other two were to alternate between Archaedas and any of the helpers he invoked.  Azawak turned the knob that starts the event and we went to our places.

Yes, I have expressed that before, haven’t I?  Archaedas was less trouble that the trogg trash mobs in some sense.  Of course, we had a plan for Archaedas and followed it perfectly, while we picked up groups of troggs in a rather haphazard manner.

Of course, the corker in all of this was that once we got through to Archaedas’ treasure room, Earl and Hurmoo, who were still level 39 at this point (everybody else had made 40 by this point, and Bigbutt was 41, so if nothing else the exp was damn good!), could not pick up the last quest in the instance.

Fortunately  for Hurmoo, he was pretty close to 40 by this point, so he left the instance to turn in a quest to boost him up for the quest. 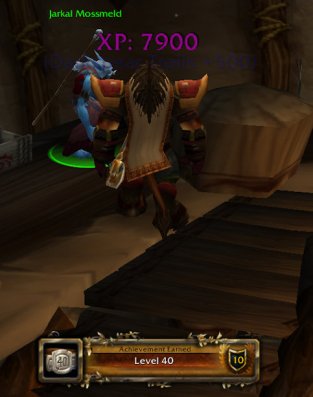 Then Hurmoo used dungeon finder to re-enter the instance, which put him pack at the initial start point.  On his run back through he suffered the only death of the night when he took a wrong turn and ran into some more troggs that we had bypassed.

Azawak ran out and revived me.  It is handy having four out of five group members able to bring people back from the dead.  I got back and was able to pick up the quest.  Then we posed for the usual end of instance group shot. Earl had already left though, so some editing was required to get him in the picture. 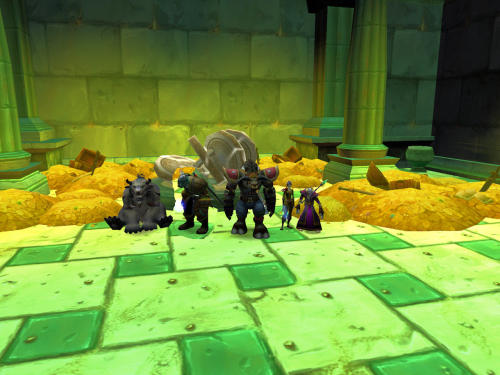 30 seconds in PaintShop Pro for the win! We even left a spot in the line for him.

Too bad you can’t actually pick up any of that gold.

Earl was still shy of 40 at the end (which was why he didn’t run back), so we’ll have to get out a death knight and clear the way for him at some point.

Of course now that we’re (almost) all level 40, that means epic mount time!

And what is next on the list?  Zul’Farrak!  We cannot even go there with dungeon finder until we’re level 42, and I am going to bet there are going to be some more quest issues.  Plus we have to go get that mallet.

I think I am going to agitate for some Azeroth holiday activities back with our alliance characters this coming weekend, since love is in the air.

(Here’s hoping that Blizz gets that lovely charm lag thing figured out soon.)