Following up on last week’s post, over at WoWBlips it seems that Hardcore Casual still reigns as the #1 World of Warcraft blog, at least as they measure it, no doubt aided and abetted by this weeks massive cross linking silliness. 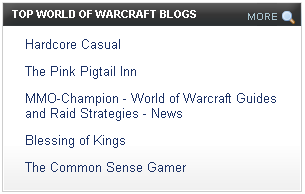 MMO Champion moved up to the #3 spot.

Rohan’s esteemed Blessing of Kings makes an appearance this week at #4.

And coming in at 5th place is none other than Darren of the Common Sense Gamer.

Elitist Jerks and World of Matticus dropped to the #6 and #7 spots respectively, while a little site called WoW.com jumped up from 95th to 91st place.

I’m still nowhere on the list, a fact made all the more galling by the fact that Voyages in Eternity, that hasn’t had a post in two years, made the list at 278th place, or second to last.  Damn you Craig!

Watch for updates on this travesty until it ceases to amuse me.