In which we discuss FarmVille.

Shut Up, We’re Talking episode #60 was recorded this past weekend and I was invited to be a guest on the show.  One of the topics of the show was Facebook games.

While the show is being prepared for release, I thought I might give some background about our prep for the show as well as my own impressions of the game FarmVille.

Certainly there are many other games on Facebook.  But FarmVille is the poster child for these games.  It is Zynga‘s biggest success, with an award at GDC and 82 million players.

From the information tag that Facebook puts up about the game: 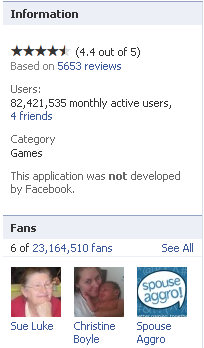 I don’t know exactly how they calculate that number, but it sure is a big one.  That would be about 1.2% of the world’s population.  As a country, FarmVille would push Germany out of 14th place on the list of most populous countries and it would be eyeballing Vietnam.

This is the World of Warcraft of Facebook games.  And, as you couldn’t get very far talking about subscription MMORPGs without mentioning WoW, so it was felt that if we we’re going to talk about these casual, social network site based games, we would have to put in some time down on the farm.

Darren got a bit of a head start on the FarmVille fun and posted about his initial impressions already.

My own impression of the game after a week or so can be summed up as, “Eh, it’s not so bad.”

FarmVille is the classic simulation game where you start with a limited set of resources, money in this case, which you can use to buy seeds to plant which, when they mature, you can sell for more cash than you spent.  Thus enriched, you can turn around and buy more seeds, or trees, or livestock, which you then harvest in turn.

The environment is very simple.  The price you get for your crops is fixed.  You know up front how much money you are going to get when you plant.  You also know how much time the crop will take to mature (anywhere from a couple of hours to four days) so you can easily calculate the optimum crop for your needs.

There are two currencies, Farm Coins, which you get for most activities, and Farm Cash, which you only get for special events… so special in fact that I haven’t quite figured that out yet.  Oooh, complexity.

Currency is one aspect of the game, and if you run short, Zynga will glad sell you some to speed things up.

Exchange Rates Are Available For Most Major Currencies

There is also a leveling aspect to the game.  Certain actions, like tilling the soil to prepare it for planting, or harvesting some crops, earn you experience.  Experience gets you levels.  Levels open up new crops to plant and equipment for use on the farm.

You also earn experience for helping out your neighbors.

While I reject these games being called “social games,” if only because of the implication that the games I play, and have played for more than 20 years, are some how not social, there is something of a social aspect to them.

Certain things you can only accomplish via your friends and neighbors.  For example, there seems to be only two ways to expand the size of your farm.  The first route is with Farm Cash.  That is in short supply, probably to encourage you to buy some, thus fund the game.

Or you can buy the expansion with Farm Coins, which are plentiful, but only if you have met a minimum threshold for neighbors.

So to expand my farm up to the Homestead size, I need 20 Farm Cash (I have only acquired 15 so far) or 8 neighbors.  I only have three neighbors so far, Darren, Karen, and a woman name Mandi whom I don’t know, but who is a level 33 farmista (and shriner) and is, if you want to play this game, the neighbor and friend you desire.

Your friends and neighbors are the key to success in the game.  And all those annoying posts on your wall from your FarmVille playing friends, those are mana for people actually playing the game.

What is an annoyance to you is a free gift, an upgrade for the farm, to a player.

There is, in fact, almost a cult of the free gifts.

You are encouraged, if you idle in the game, to send gifts to your friends and neighbors.  These are often things that are useful, like fruit trees or livestock.  When you receive a gift you are encouraged to send a thank you gift in return.

And thus is the circle of gifts reinforced.

At first I felt silly with the constant gift giving.  FarmVille = annoying has been drummed into my head for a while now, so deliberately sending things from the game to people seemed like a bad idea.  But when you are playing the game, theses messages and gifts are good things.

Unfortunately, that is about it for the social.  You can send gifts to each other, read about each other on your wall, and even make a solo visit to each others farms.  You cannot, however, actually play the game together.  The closest you can come is leaving behind little messages when you visit.

So was it fun?

A bit.  It would be on the Taipan! level of fun for me I’d say.  A lot slower, but a lot more cute I guess.

You don’t have to invest a lot of time in the game.  You can come and go with the timing of your crops, with a stop in to fertilize the farms of your neighbors.  And it has a minor SimCity-like note to it, building and creating, that has some appeal to me.

And while we were, in part, playing the game for the lulz, once we all grouped around as neighbors, things picked up.  We spread the gifts around, did chores on the farms of the others, and left the occasional goofy message.  Even Darren picked up and ran with it after I came from behind and passed him in levels.  Nothing like a little healthy social competition I suppose.

But it was frankly much more fun to sit around before and during the show and talk about our experiences than it was to actually play the game.  In other words, it was more fun to be social than to play a so-called “social game.”

FarmVille wasn’t the only game we played.

Among us we played Mafia Wars, Vampire Wars, My Tribe, YoVille, D&D Tiny Adventures, NanoStar Siege, Bejeweled Blitz, and a few others.   We speak about many of them on the show.  I’ll take some time to write about a few of them here, though not all of them.  For example, I feel about Mafia Wars and its reskinned clone, Vampire Wars, about the way Darren felt about FarmVille in his first impressions post.

Will I keep playing FarmVille?  Probably for a bit.  It is pretty light and I am fond of the SimCity-like genre of simulation games.  Plus I have to keep ahead of Darren.

If you want to give it a try, you can always send a friend invite to Wilhelm Arcturus and add him as a neighbor.

And, yes, that is a real picture of me on my profile.  It is from 1988, and I am feeding a baby kangaroo.  That is my biggest mustache ever.