A month has gone by since Lord of the Rings Online changed its business model and went live advertising itself as free to play.

I am not sure if enough time has elapsed to declare success, but things are certainly upbeat.

There is some contention over what constitutes free.  There are some who are happy enough to be able to get into the game without handing over a credit card number, while others feel that if every single thing in the game is not attainable within the game without paying any money, then it is not free.

I even read something from one champion of the whole cash shop business plan concept decrying LOTRO for selling anything beyond fluff items.

Sure, the LOTRO Store has its share of fluff, appearance gear, house items, and even some special horses for a limited time.

Only available until October 22

I’m sure that the fact that these mounts are for sale will annoy somebody, since you have to work to get them in game.

But no matter what you sell in a game cash shop you will piss somebody off.

People will fret about being able to buy uber elite gear, even though I have yet to see a cash shop that sold that sort of thing.  It certainly isn’t available at the LOTRO Store.  Not even basic equipment is available so far as I can tell, but my highest level character is only 40.  The shop won’t show you things you cannot use… for the most part.

And, as a gaming company, if you sell only useless fluff then your accountant will start yelling at you because you won’t be able to pay the bills.

It is a fine balance and success is a day to day measure, because you could break faith or cause an uprising with the next item you add to your store.

But Turbine has some practice at this, what with Dungeons & Dragons Online being the darling of the free to play proponents, having made the transition from subscription and done very well.  Or so we hear.

And now they have LOTRO in that league as well.

When it comes to the business model change, I’m somewhat indifferent.  But then I can afford to be.  Turbine has me covered.

Three and a half years ago I put down my $199 for a lifetime subscription and have been pretty happy with it ever since.  I just want the game to survive because then I can keep playing.  That I became a lifetime VIP member with this transition seemed like an excellent payoff. 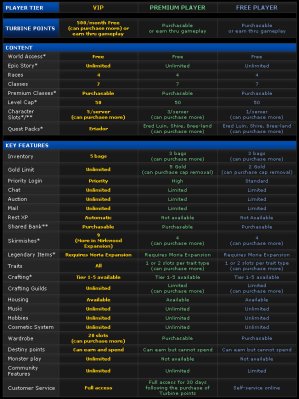 The Real Levels of LOTRO

Still, I had my hopes for the LOTRO Store when I saw I was going to be getting a stipend of 500 Turbine Points a month for my early investment.  Considering that when buying said points that they can run anywhere from 0.7 cents to 1.75 cents a piece, I’m feeling pretty good.

The first thing I went after in the LOTRO Store was the upgraded horse for all of my characters in their 20s.  Having the fast horse is nice as travel is simply part and parcel of the game.  If you aspire to level up, you will see a lot of Middle-earth from ground level.

After that I spent some of my Turbine Points on individual vault space upgrades.  I had been waiting for F2P to go live with a couple of my characters simply because they were out of space.  Vault upgrades used to not only cost in-game currency, but were also level restricted.  My two space constrained characters couldn’t have gotten more vault space no matter how much gold they had in game.

I didn’t go completely nuts on the individual vault space upgrades as I have a few alts and I could see that quickly eating up my entire pool of points.  I did purchase an upgrade to shared storage, though upgrading that is a bit dear in price.  On the other hand, it is also incredibly convenient, so perhaps it ought to be a bit pricey.

Then I found an unexpected use for my Turbine Points: Crafting.

When you craft, when you get into a particular tier you get the first batch of recipes for that tier right away, for free, no questions asked.

Generally the next set of recipes in a tier, which make equipment a couple of levels higher, is available from the crafting trainer for your profession.

But there seems to be, I have seen, two more sets of recipes.  And for those you have to depend on drops or the auction house.  Neither of those avenues are very satisfying.  Drops are completely random off of sentient creatures and the auction house is… expensive.  I hate to whine about price gouging… business is business… so let’s just say that there are people out there who seem determined to see how much the market will bear.  That places them mostly out of my price range.  When you have a gold and you wand six recipes that are up for a gold each, you’re probably going to end up doing without.

However, I found that some variation of those last two sets of recipes can be purchased through the LOTRO Store, and at pretty reasonable prices.  I generally ignore the last set in a tier as it overlaps with the first set of the next tier, but the material requirements are pretty steep.  But that third set, I went and snapped up the recipes I was missing.

And then there was crafting tools.  You can buy the deluxe ones that give the best chance of a critical success through the LOTRO Store.  That was a no-brainer.  We had somebody in our Kinship who was making tools, but he disappeared (peers at Gaff through narrowed eyes) so we’re on our own.

So I found my sweet spots in the LOTRO Store.

And the game itself seems more lively.  There are a lot more players running around in the starting and low level areas, what is essentially the free on all counts portion of the game.  The chat channels have degraded somewhat.  It isn’t Barrens chat yet, but you get at least one bozo a night that makes you wonder why you haven’t turned off OCC yet.

The instance group got into the Lone Lands about the time the business model changed, but a lot of people have caught up with us.  People seem to either be okay spending some money on that as their first bit of paid for content, or they figured out that you can earn Turbine points in game to pay for it.  The Lone Lands is only 350 Turbine Points, or less than half the price I paid for a 10 slot upgrade to shared storage, and you can earn 650 Turbine Points in the starting areas if you are diligent.

That will get you the Lone Lands and give you a start on the next area.

Other things have changed in the game, small things.  The starting quests are a little different and if you are of the race of men, you get to meet Aragorn first thing.

The UI has been spiffed up a bit.   The icons remain the same though.  I’m not sure it is worth another attempt to make them better though.  So many of us are used to the silly ones.  There is a real art to making an icon that represents the concept you want to get across without becoming a literalistic parody of what you’re trying to say.

And I noticed that a lot of the vendor trash that drops from mobs has been renamed and sometimes given a different icon.  The changed ones sound vaguely more useful, something you might actually be able to sell to a vendor.  And some of them actually stack to 50 in your bags rather than the old stacks of 10.

But otherwise the game is pretty much the same.  Turbine has been busy over the last three and a half years.  And while it still does not have quite the same polished feel when it comes to mechanics like UI functionality and responsiveness, it is quite an improvement over how things felt back on day one.

Now if they could just make it so I don’t un-target the mob I am fighting if I accidentally click somewhere on the landscape, I’d be very happy.

How about you?  Have you been back to Middle-earth since it went free to play?

[Addendum: Massively says things seem to be going well for LOTRO since the switch.]