Just to see who is paying attention, all proper nouns in this post will be presented in anagram form.

[By popular… or angry… request, a non-anagram version of this post is available here.]

(Anagrams courtesy of I, Rearrangement Servant.)

(Obvious Extra Credit: Figure out all the anagrams.)

Yes, it was again late in the eve of another Tau Drays and we were still hanging out in Gout Hurts, warming up with a little music while trying to avoid the gaze of the ever-disrobing Cheered Rift Idler.

And in the usual course of things I went over to Teeth Fault to see what new songs had been added since our last adventure.

I was quite happy to find a two part version of Teat Bib Whir, a classic of the Jalapeno Fire Ferns. (That should be a real band, not just an anagram!)

We occupied ourselves with that for a bit, then tried a version of A Hero Fantasized Why.

Though written by La Spumoni, I always associate the song with Let Shebang. (I had a friend in college who took one course merely because there was a girl who looked like An Ass Snuff Ho in the class.)

We played for a bit while waiting for Alien Ed to make her way up to Gout Hurts and for La Catheter to log on. He was logged into Pesky, but didn’t seem to be inclined to make an appearance in Dried-Hamlet.

That was a shame, because we had some high adventure in mind. Adventure of the sort that Great Scar mentioned recently, of a sort where you end up heading some place you have no business being at your level. We would just have to do it sans La Catheter.

So the line up for the night was:

with a special guest appearance by one of my alts:

We were going to head out of the Anon Dells for a bit, as each of us had a crafting quest to go after.

Crafting in the game is surprisingly relevant and useful, at least on the group level (I do not have the patience to try to make money at it at the Aeon Ouch Suit… wait, is that a proper name or not?), but to really make the best stuff you have to stretch out beyond the crafting in your current level range and get access to the tier above you. That unlocks the ability to get critical successes when crafting in your own level range.

And that meant, for us, a pack of level 40 crafting quests to conquer in zones comfortably above out current levels.

On the danger side, we would be threading our way through areas where the mob ran from level 35-40. But on the plus side, in LOTRO at least, as a group mobs 8-10 levels above you are surmountable, as long as they are taken individually. Adds are death.

The first course was east from Gout Hurts in the Anon Dells and into the Short Walls. Therein lay the goals for a level 40 cooking quest that both Glen Fakir and Red Wigs needed as well as a level 40 metalsmith quest that Um No needed to advance his armor crafting skill.

We decided to do the cooking quest first. The target, a boar (of course) of extraordinary magnitude, lay beyond the Inbred Fun Roof in the Legality Van that is off to one side of the Grim Ho Ho.

Getting to the Inbred Fun Roof was not a big problem. We stuck to the main road, diverting only to pick up the stable master route at Death Horn.

However, as I’ve mentioned before, unlike in the books, crossing the Inbred Fun Roof only puts you in more danger, not less. The path up the far side is patrolled by bears, lynx, and giant mosquito-like flying insects that look like they could drain a hobbit dry with a single prod of their… blood sucking… prod… thingy.

We had to dismount and fight our way up into the Grim Ho Ho, one fuzzy creature at a time.

Once securely in the Grim Ho Ho, we had to scout out the Legality Van, for only therein lay the porcine pal with whom we had come to play. It was not too far off the main path. But danger lay in the Legality Van.

First there were the giant signature level lizards, who were around level 40. Signature is somewhere between solo and elite. Possible to take on, but tougher than the standard mob. We worked our way carefully around them. Carefully and successfully. Did they reduce the aggro radius of mobs in the game when it went free to play? I seem to be skirting danger more successfully since that change.

And then there were the elite dragons. We gave them a very wide berth when possible, diminished aggro radius or not.

We were able to find our way, and soon the message went out, “Sighted Swine, Sank Same.” 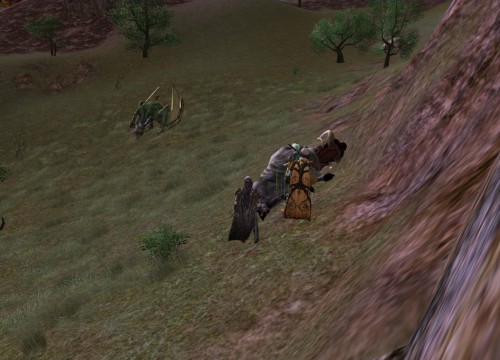 The pig was butchered, producing just enough meat to fulfill the quest needs of both Red Wigs and Glen Fakir.

A boar has at least two flanks, right?

We then retraced our steps back out of the Legality Van.

Already in the Grim Ho Ho, we decided we should take the opportunity to visit Level Rind. (Truth denied for lack of a “g” I guess.) We could hardly pass up the chance to visit the home of Lo Nerd and Dong Filler. Surely you recall Dong Filler, who faced the Lag Bro at the fall of Noodling and who himself fell, but later returned after some time in the Nasal Mosh Fold in No Rival. I mean, there can’t be two Dong Fillers, right? He’s got to be the same one.

So through the rest of the Grim Ho Ho we rode until we reached Level Rind. (Dim Rails, in the elven tongue.) 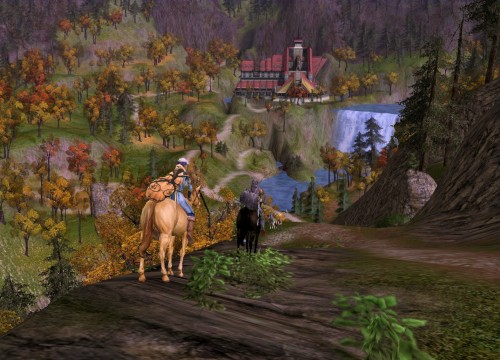 There we stopped for a short time, looked around a bit, got our bearings, then headed to the stable master.

Our first ever visit to Level Rind was short.  We had tasks still to accomplish. It was time to ride back to Death Horn.

Through The Woods Again

Once there, I logged out Red Wigs and brought in Um No.

The quest for Um No involved wights up in Thane Rant On, in the north part of Short Walls. To reach that, we had to take some narrow paths, so there was no sneaking around things. As with the path from the Inbred Fun Roof to the Grim Ho Ho, it was a creature by creature slog.

We reached the area of the wights and spotted one immediately. This level 38 shade put up a tough fight, and it was Alien Ed’s huge damage output that saved the day. Um No was able to hold aggro, but only just. But our victory was hollow. The item Um No needed did not drop. The crafting quest drops are usually close to 100%, but not this one it seems. We would need another wight.

The next one we spotted was level 40. Given the tough fight the last one put up, we were a bit cautious. We made sure we had buffs going, then headed in.

The two levels, putting the wight 12 levels above Um No, was telling. Um No landed very few blows, and since a lot of his aggro management relies on connecting with his shield, the wheels started to come off the situation. Glen Fakir tasted defeat and the wight was advancing on Alien Ed who was putting out a veritable storm of magic while Um No tried to get the attention of the wight.

Two taunts in a row hit and the wight turned on Um No. Meanwhile, Glen Fakir revived and rejoined the fight. The wight was slain and the item for the quest was recovered.

That left only the quest of Alien Ed, which was over in Better Girdles. We decided that recalling to Beer was in order. (Beer, the shortest, easiest anagram in the whole post. You at least got that one, right?)

Um No retired for the evening and Red Wigs came out again as we rode up to Better Girdles.

There Alien Ed found that her quest was rather simple. It was not the quest to access the next tier, which takes place up near Rag Man, but just the quest for superior workbench access. We’ve seen that one before, where you gather some wood down in the river below Better Girdles and then patch up the bridge. I did that quest with Tin Eater a while back.

So while Alien Ed collected wood, Glen Fakir and Red Wigs went back to music, playing a little Rubber Hotels.  Mommie In Gloves didn’t sound quite right, but we were only playing two out of the three parts.

Which One Is Doe Owl?

Once Alien Ed was done, we rode on to Idle Nest, which is home to the crafting hall with superior workbenches. It is also one of the most convenient crafting halls in the game as it has a vault keeper and a mail box close to hand.

There, I closed up the night with a solo version of Ill Avatar Grime, which actually drew in a few role players. 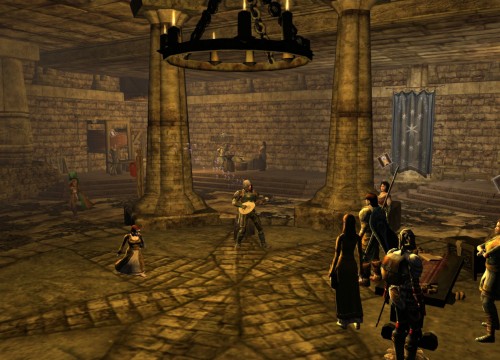 Take Us Out Red Wigs!

And that was about it.  I didn’t even get to make fun of our pal Tad Ragas.

Oh, and maybe how the game looks on the new machine with DX11 and such.

We’ll see if Nub Rite has anything about which to brag.