Blizzard has been working on a refresh of their community web site.  The current site hasn’t been radically updated in a few years, so I am sure somebody in Anaheim felt it was due for an overhaul.  (Somebody driving the Battle.net agenda, unless I miss my guess.)

This isn’t a big deal to me, unless Blizzard makes a mistake.  The current site is a bit busy, but at least I am used to it. 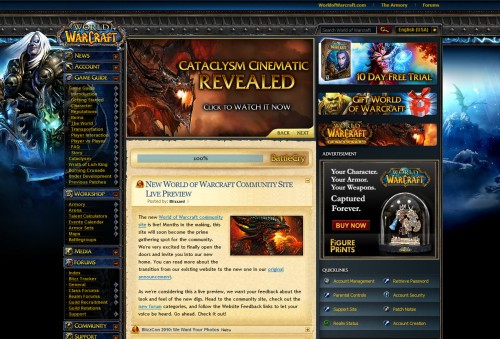 The site we've grown to know, if not love...

With the new site (here), they are updating the design with a cleaner look that is clearly pushing the integration with Battle.net. 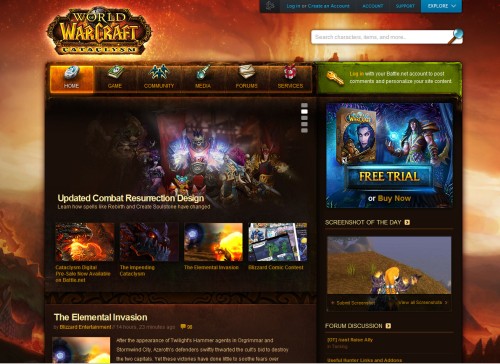 A slick new view of WoW

Gone is the side-bar of a million choices.  Blizzard has discovered tabs and clean lines.

As far as I can tell, everything I am used to is still there in some form, on one of the tabs.  There will be some confusion I am sure, but that comes with any change.

I do, however, see one of my pet peeves and one thing I am sure they will live to regret.

The pet peeve is that there is still no RSS syndication button for game news.  You can find buttons for Twitter, Facebook, YouTube, and even a feed for their infrequent podcast.  But a simple RSS feed for news?  Not that I can see.

And the thing they will live to regret?  They are allowing comments on news items on the main page.

Comments, on news items?  On the front page?

Have they not visited their own forums?  Have they not seen what happens when you allow comments on things?  Have they ever really visited Facebook? Did they read the comment thread for EA Louse? (1,345 comments at this point.)

Because that is what they are asking for.

I am not one to stifle discussion, but there is a time and a place.  If it were my choice, I would put a link at the end of each news item that pointed to a forum topic under which people could express their opinions.  As Spinks posted, discussion is the primary purpose of the official forums, even if I do not agree on her desire to exclude the game devs from that discussion.

What you will get in comments, judging from what I have seen elsewhere, will end up being:

And all of that is fine in the forums, but on the front page of your game’s main public site?  Maybe if you had a small fan base, but for WoW?

This is just going to become a new place that will need moderation, and all the more so for being on the front page.  And people just love when their comments are deleted, which just leads to more anger.  Better to not let thing fester out there on the main site.

Or that is my opinion anyway.  But I might have a more negative view of community than some.

5 thoughts on “World of Warcraft – The New Community Site”