Pokemon Black & White were announced for the US/EU markets a while back.

If you are really into it, you’ve followed the news from Japan, where Black & White have been out since September, where it was the fastest selling Nintendo DS game ever.

But the marketing campaign for the US/EU market is just warming up.  The games are due out in Spring, but the drum beat of news updates and promotions has started.

The official Pokemon Black & White web site is up and running.  The two legendary Pokemon from the games, Reshiram (white) and Zekrom (black) are featured heavily on the site, have starring roles in the latest (13th) Pokemon movie, and even made an appearance in the Macy’s Thanksgiving Day Parade this past Thursday, along with the giant, inflatable Pikachu.

Nintendo has now released a key bit of information about the game, the names and pictures of the starter Pokemon to be featured in Black & White. 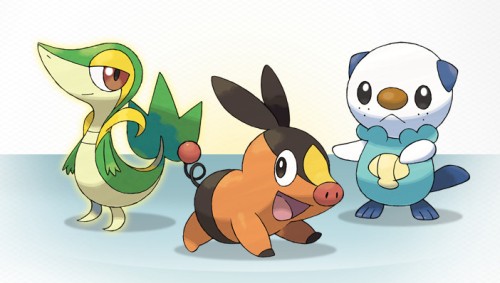 They naturally follow the set-in-stone pattern for Pokemon, with Snivy being a grass-type Pokemon, Tepig being fire-type, and Oshawott as a water-type Pokemon.

In fact, at a high level, the game sounds very much like every other Pokemon game.  Pokemon game play is very tradition bound at this point, over 14 years since the first versions came out on the GameBoy.

But each game changes the series in some way.  New features, better graphics, and of course more Pokemon show up with each turn of the yearly cycle.  It is probably one of the most consistent, measurable evolutions of a game one could study, especially if you wanted to avoid sports games. (How many Madden’s?  I was in an EA focus group back in college for this new football game they were going to release.  That was a while ago.)

My hope is that they will do more with the WiFi capabilities beyond battling.  Some sort of co-op play, like the underground in Pokemon Diamond & Pearl would be a nice addition.  We shall see.

Blizzard is making a big push to get everybody ready for the Cataclysm expansion.

We’ve gotten a revamp of classes.

New starter experiences are in for the current races.

The sundering has occurred and we have changes all over old Azeroth.

They have cut the experience needed to get from 71-80, so you can hurry up an get ready for the expansion.

We get to see the trailer for Cataclysm any time we want from the game logon screen.

For a limited time you can get all of WoW, the base game and both already released expansions for $20.

I guess Blizzard hasn’t released enough expansions yet to have to worry about consolidating them all in each running expansion there after.  They can stick with their Battle Chest combo offer for now and worry about the EQ/EQ2 method (both of which have way too many expansions to juggle individually at this point) at some later date.

How many expansions do you have to have before you just start rolling them up?

And as SynCaine would no doubt point out, you can get all of the current game for less than the price of a sparkle pony.