I felt that I had to get out there and find the player housing in EverQuest before my Station Access time expired.  I have spent most of that time playing EverQuest II Extended, which is odd since I’ll still be able to play once the account lapses.

But it can be difficult to get back into EverQuest.  For all my talk of playing on day one, it has been a while since the game was my main focus… like about 8 years.  What an odd ratio, 3 years of play, 8 years of nostalgia… nostalgia for probably the first 12 months really.

Getting it installed went fine, as I noted previously.  But since it was a fresh install, I lost all of my key mapping, which meant redoing it all again or trying to play with the default.  Did we really use those keys back in 1999?  It was so long ago and everything has gone WASD since.

And then there was the whole navigation aspect.  I can make my way through the orginal world from memory still, and Kunark and Velious are no mystery, past that I am a bit hazy, and once we get to the Val Shir and The Plane of Knowledge, I am about out of cards. (Except for the areas put in with The Serpent’s Spine, where I did play into the 30s when that came out in 2006.)  The Plane of Knowledge is still that new place that emptied out the remaining players still hanging out in the old cities, though it at least gave them one central place to hang out.

So me finding housing in EverQuest unaided seemed unlikely.

Fortunately the web was there to help.  Over at Zam, as they now style it, the heir to Allahkazam, once the prime place on the web for EverQuest information, they had a nice post up on where to find housing and how to acquire a place of your own.

I was happy to see that they opted for the neighborhood style of housing akin to what Lord of the Rings Online offers.  I haven’t finished up the post I started on LOTRO housing quite a while back, but I do like many of the aspects of it and was interested to compare it to the EQ implementation.

You get to the housing through the guild area of the Plane of Knowledge, which is one of the places you can find a lot of people (and their hired hands) hanging out.

As with LOTRO, you then choose your neighborhood.  The neighborhood choice panel in EQ is nice enough to give you some demographic information.  Each neighborhood has 71 plots of land and the panel tells you how many have already been claimed.

71 is a lot more than you get in a neighborhood in LOTRO.  To make moving around, each little section of housing has a little teleporter, there being 7 sections of approximately 10 plots of land each.

I had to search through a couple of neighborhoods before I found a plot near the entrance that was unclaimed.  Unlike LOTRO, a house doesn’t come with your land.  You can pick your own.  They are a bit pricey though.

After dropping 420 platinum coins on the land, I found that a house was a bit dear.  3 rooms houses run around 10K plat, while a 1 room runs just over 5K plat.  I had to assemble some coins from other characters to get a one room shack, which is what had the lowest daily upkeep price.

Yes, you have to pay daily upkeep, in plat (42 in my case) for the house, which you arrange through the real estate management window.  (Who knew EQ would ever have a window with that title!)

I thought this was a community college course

I realize that coinage had gotten out of hand, but here clearly housing differs from the EQII variety in that there is none in the new player price range.  Not that there are a ton of new players in EQ, but still.  And so I had my house. 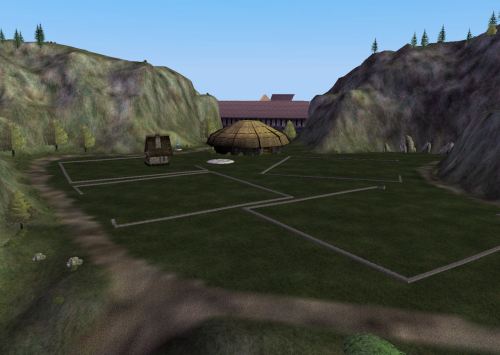 All the other plots in my area had been purchased, but nobody had built anything.  And after buying the house and paying some upkeep, about all I could afford was a bunny rabbit for the yard. 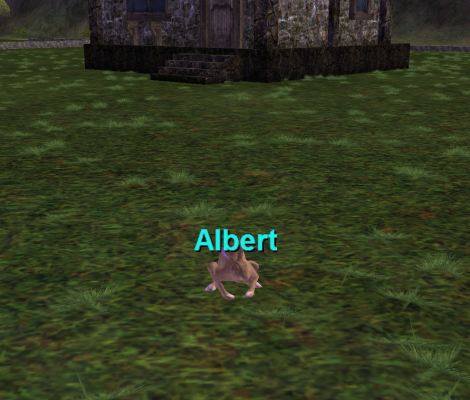 So went to some other neighborhoods until I found one with houses and did what we’ve all learned to do playing RPGs and MMOs… I started walking into other people’s homes uninvited.

This looked pretty affluent from the outside, and on the inside there were many things to see.  EQ doesn’t have the rather disappointing limitations on “stuff” that LOTRO does in its housing.   A painting in one of the houses looked oddly familiar.

There was also quite a display of weaponry.

I let my daughter wander though houses for a bit.  Now she is on Wolfshead’s side and wants to know why WoW doesn’t have housing.

And that was about it for me and EverQuest housing.  Low on plat, I couldn’t experiment much.  Some gnome will probably be along to reposess my house soon.

But it was nice to see how they implemented player housing in EQ.

On the plus side, I like the housing suburb idea, akin to what LOTRO has, relative to the EQII one door, many occupants.  And I like that object placement has that wide-open “put it anywhere” aspect that EQII has, and that LOTRO would be well served to copy.

On the other hand, housing seems a bit pricey.  No new player is going to have a house for a long, long time.  I like the EQII 5 silver a week apartment option.  And the empty plots that people have bought but not bothered to decorate, those are something of a downer.  Some areas look like what you see flying in over Las Vegas.  LOTRO’s neighborhoods never look so empty, since the house comes with the lot.

And, of course, the game is starting to really feel its age, even in a new area like this.  You can get around, but convention has replaced a lot of quirks in this game from 1999.

Hey, here it is 7:30am at my location, I opened up World of Warcraft for the first time since Cataclysm hit the shelves here and what did I see?

It launched and I was able to get into the game.

I love it when a plan comes together.

And all my servers are up to. (Some others seem to be down still however.  But I’ll take the attitude of our European cousins and just wallow in the fact that I got mine before somebody else got theirs.)

Granted, I have to go to work, but it is nice to see that things are working.