We have been discussing what roles and classes the instance group will take on when we start again fresh in Azeroth renewed and I am seriously considering going the mage route.

Part of it is the desire to try another class.  I’ve played, at least past level 40, everything except a warrior, a mage, and a warlock.  I do not think I have played any of those classes beyond level 20, if that far.  In contrast, I have 3 druids and 4 hunters past level 50.  So some sort of change seemed to be in order.

But the other part is travel.  Travel has changed in Azeroth.

Yes, some of my characters can now fly in Kalimdor and the Eastern Kingdoms, and it is quite the liberating experience.  Once you have become unstuck from the ground, it is tough to go back to walking.  Remeber how tough it used to be to get flight at 70 in Outland only to return to walking in Northrend?

And Kalimdor and the Eastern Kingdoms are also rife with new flight points.  You no longer, for example, need to trudge up the hill to get to Stormwind or Ironforge.  Goldshire and Kharnos both have flight points, so when Hallow’s End comes along, you can be flown right in to help put out the fires.

But travel to Outland or Northrend… that has gotten a little more tricky.

With the shattering update, all the portals were removed from Shattrath and Dalaran.  This has killed off the population of Dalaran some and will probably make Shattrath feel even more dead, if that is possible.

Of course, when I logged on with Vikund to get the flight master skill so I could fly around the (new) old world, he was off in Northrend, in Dragonblight of all places… probably because it is a quick flight from there to Wintergrasp.

And his hearth stone was set to Dalaran.  It was after recalling to Dalaran that I remembered hearing about the portals.  Yup, they are gone.

Fortunately, the flight master in Dalaran could teach me the flying skill I sought, and at a discounted rate due to my factional standing. (200g for exalted)

But then it was a long flight out to Howling Fjord where I had to take the boat to Menethil Harbor, where I could start flying to my heart’s content.  Menethil Harbor was looking a little… wetter than before. 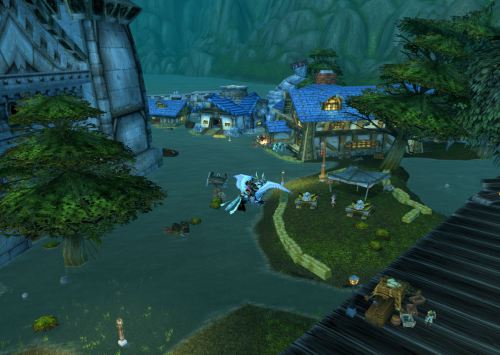 But I guess I can see some good in these changes to travel.  The removal of the portals give the world back a feeling of size and puts a bit of effort back into getting places.  If I want to get from Stormwind to Darnassus, I can’t just hearth to Dalaran, jump in a portal, and be there in a minute or less.

And I am glad to see that Blizz opened up the auction house bot at the engineering trainer to all and sundry, which is now where you’ll find most of the people in Dalaran.  And the trainers, that will now keep people from having to head back to the old cities.

But I am thinking that mages and portals… there is going to be some money to be made with that.

So mage it may be.

I even rolled one up two weeks back when part of the instance group decided to do the gnome starting area.

I just have to get used to being a clothie.

Ouch.  The protective qualities of robes: not so much.

7 thoughts on “Azeroth and Making My Next Character”