There is a press release and everything.

Founder’s pricing, pre-order items, collector’s edition, the standard fare for a launch.  We’ll see if they can make it more confusing as it gets closer like Cryptic did with STO.  Maybe a KFC tie-in?

REDWOOD SHORES, Calif. – January 4, 2011 – Trion Worlds, a global publisher and developer of premium online games, today announced that the upcoming MMORPG Rift™ is scheduled to launch in North America on March 1st  and in Europe on March 4th. Today also marks the start of the game’s pre-order program through both digital and retail channels.

“The launch of Rift is the culmination of our tireless efforts over the past several years to bring players the most complete, full-featured, and dynamic online game they’ve ever experienced,” said Lars Buttler, CEO of Trion Worlds. “Through the dedication, creativity, and incredible track record of our veteran development team, we’ve been able to create an exceptionally polished and immersive online world filled with adventure, surprise, and beauty. We can’t wait to share Rift with players around the world.”

Beginning today, customers who pre-order Rift receive their choice of one-of-three exclusive in-game pets, and are eligible to participate in the head-start period anticipated to begin February 24th. Pre-order customers will also be granted access to play in all remaining closed-beta events. Beta details, including a regularly updated event schedule, are available at http://www.RIFTgame.com/beta.

Available for purchase online and at select retail outlets, the Standard, Digital Collector’s and Retail Collector’s Editions of the game will sell for $49.99, $59.99 and $79.99 USD, respectively. The standard monthly subscription rate for the game will be $14.99 USD.

For all info on the Collector’s Editions, pre-order incentives, and subscription plans, please visit http://www.RIFTgame.com/preorder.

Rift is rated T for Teen by the ESRB with the following content descriptors: Alcohol Reference, Blood, Mild Language and Violence.

For the latest info on Rift, please visit http://www.RIFTgame.com/.

I wasn’t really planning such a competition for 2011 or for any other period of time.

I have a website with free WoW guides that cost money!!

That was just too cute and too good of a yardstick by which to measure all other spam comments.  This comment now stands as the best spam comment of the year (so far) for this site.  I will let you know when it has been potentially surpassed.

Meanwhile, just in case you are selling WoW Guides or in-game currency or anything of the sort and you want me to advertise your site, read this post first.

That is pretty much how I foresee any negotiations proceeding.

Good luck.  Now waiting for the next great spam comment.

(Note: Nothing you say in comments counts SynCaine… not for this competition at least.)

WordPress.com had something new for me this new years.  They sent to me, and presumably anybody else with an active WordPress.com blog a little year end summary report on my blog.

(That last one represents how committed I was to STO a year ago.)

The report came with the option to automatically post it to your blog, though I declined to do that here as I found the formatting awkward and inconsistent with the theme I use.  But if you really want to see a full report, I did post the one for EVE Online Pictures just to see what it looked like. (Awkward and inconsistent.)

But getting three reports let me see something that somebody might not notice if they only had a single blog or perhaps multiple blogs that got about the same number of page views over the course of the past year.  The report has a “Blog Health-o-Meter” as part of the package, and it is, I gather, based on the number of page views your blog received in 2010.

So, for example, this was the meter reading for The Ancient Gaming Noob:

Health of The Ancient Gaming Noob

I think that “Wow” is their assessment of the blog and not an indication of what I a lot of my posts are about.

And then they include some text to give some basis to the reading of the meter.

The Louvre Museum has 8.5 million visitors per year. This blog was viewed about 460,000 times in 2010. If it were an exhibit at The Louvre Museum, it would take 20 days for that many people to see it.

So there, I thought, is the scale.

Then I went and looked at the EVE Online Pictures report, which had this meter reading:

Not bad.  I’m on fire, which I guess is a good thing.  And given the size of the whole meter and the difference in position between the two blogs, you might guess that EVE Online Pictures is somewhere in the same zone as TAGN.

Here is what WordPress.com said:

About 3 million people visit the Taj Mahal every year. This blog was viewed about 38,000 times in 2010. If it were the Taj Mahal, it would take about 5 days for that many people to see it.

The ratio there is about 12 to 1 in favor of TAGN, something you don’t really get a sense of from the meter. (The actual page view number is 38,966 for 2010, so they were closer this time around.)

And we learn that the Lourve is more than twice as popular as the Taj Mahal.  I bet you didn’t know that!

And then there is Star Trek Online Pictures, which I suspended posting to when I stopped playing regularly, which wasn’t that long after launch.  Here is the meter for that: 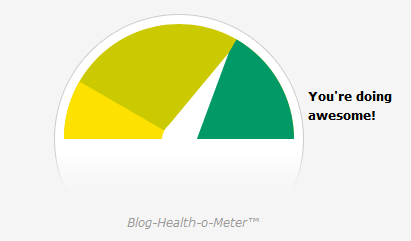 Doing awesome, up there on the line between the green and the… not green section of the meter.  And what does it take to get on the line like that?

In 2010, you wrote 13 new posts, growing the total archive of this blog to 21 posts. You uploaded 25 pictures, taking up a total of 6mb. That’s about 2 pictures per month.

There is about a 17 to 1 ratio in favor of EVE Pics and a 209 to 1 ratio in favor of TAGN, but still in the green.  They were nearly spot on with the number of page views (2246 total) and they left me with the strange desire to calculate how many 747-400 jets it would take to transport all the visitors to the Louvre… or the Taj Mahal… or both.

But the scale of the meter, that is still somewhat ambiguous.

Okay, I get it.  WordPress.com is in the business of hosting blogs and you get people to pay for services by encouraging them.  With that goal you can’t really send people a meter with the arrow all the way to the left and the caption, “Nobody even knows you exist!” then compare them to, say, the number of live births at the North Pole and expect that to be a winning formula for customer encouragement and retention.

And maybe the green segment has significance.  Maybe you do not even get a chart if you do not meet a certain minimum threshold.

I have two other blogs that I was experimenting with at one point, one of which got 516 page views in 2010, and one which got 5.  I did not get a report for either of those.  Then again, maybe they haven’t gotten that far down the list.  I wonder how many page views is at the mean of the bell curve.  With 16 million blogs hosted, I cannot imagine it is a huge number.

Do you have a WordPress.com blog?  Did you get a new year’s chart?  To what did they compare your traffic?

Do you use a different service for your blog?  Do they do anything similar?

Integrated stats is one of the main reasons I went with WordPress.com over four years ago, after experimenting with a couple of other services.  But things change.