With DC Universe Online launching, EuroGamer seems to be trying to suck up to Sony in general and SOE in particular in the grand tradition of online gaming journalism.

I already quoted the gem from the first interview.

The second interview… well, calling it an interview stretches the term… it is more “Quotations from Chairman Smed”…  contains a look at what else might be coming out from SOE in the near future.  And while it galls me a bit that EG wants to play along so badly that they count FreeRealms on PS3 as a new title (wasn’t that supposed to ship concurrent with the Windows release originally?), for me the jaw dropper was this quote:

“And we haven’t announced a release date for it but you can expect it… We’re looking at late first-quarter, early second-quarter [2011].”

My first thought was “typo.”

Surely they meant 2012 at the earliest.

So somebody at EuroGamer thinks we’ll be playing PlanetSide Next by, say, the end of May.

Really?  They just took that statement and asked no questions?  Journalism at its finest.

This, for me, flies in the face of the marketing ramp time requirements to launch a new title. Not that I would be shouted down if I suggested that SOE isn’t the sharpest spoon in the drawer when it came to marketing.  But still, the SOE of the last five years has been more about announce and delay, hype and silence (think The Agency), and not about hitting very aggressive dates.

When do you think we’ll see PlanetSide Next?

In my further adventures with Twitter and trying to figure out exactly what it is good for, I decided to follow as many MMO company Twitter accounts as I could.

I wanted to see what companies were doing with Twitter.

A lot of the game companies are very quiet most of the time, which I appreciate.  They save their tweets for something special.

SOE, is more verbose and occasionally talks about game status, but has been mostly promoting DC Universe Online of late.  Heck, even John Smedley is suddenly quite active on the DCUO front.

TERA Online talks a lot about… well… TERA Online.  Too much, I think.

But BlizzardCS seems to be unique in that they give actual customer service status, like the in-game petition queue duration. (Which went from about a 3 day wait to about a a 12 hour wait in the course of a day at one point.  Somebody turned on the steam there.)

But they also give away Blizzard Authenticators by the hundreds.

No, really.  I’ve seen a couple of tweets like this already.

100 random followers to e-mail CSTwitterFeedback@Blizzard.com will get a Free Authenticator! Rules and Restrictions: http://bit.ly/eVcSYp

I was curious enough about this that I responded and won a free authenticator on the first try.  And they sent it to me, for free.  No shipping or anything.  I didn’t actually need an authenticator, but I know enough people who play WoW that I’ll find somebody to pass it on to.

But I thought it was interesting that the organization within Blizzard that probably benefits most from people having authenticators actually has budget to send them out to people who know where to find them for free.  It is one of those things that seems logical, but which I hardly ever see.

Enlightened self-interest or some such.

[Addendum: You can read a more clearly worded and detail description of the Blizzard Twitter Authenticator Give Away contest here.]

The big drop for Incursion went live at last, and there is a ton of stuff in it.  Really, look at all that stuff in the patch notes.

That is about a 1.2 GB download, which is about double the payload of your typical EVE Online expansion.

And while the Sansha Nation incursion is the big deal, the namesake of the expansion, the new character creator is the first new thing people will likely run into.

Of course, the MMO tradition… and especially the EVE Online tradition… is that you make your character and then you are stuck with it for freakin’ ever.

So, remembering how I rushed through the avatar portrait creation back when I first started playing EVE, and how I have had to look at the same crappy avatar ever since, I thought I had better have a practice run before I went for my main character. 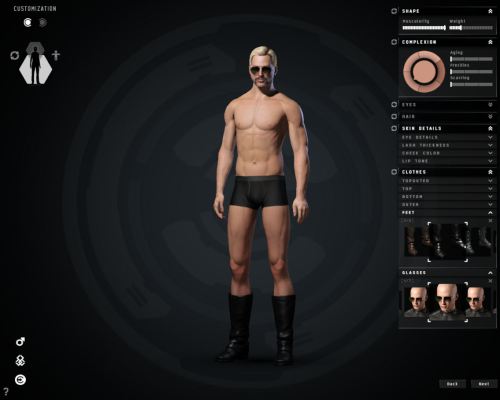 Percy has the most muscular legs...

I mean, Tom of Finland look out, we’ve got the character generator dedicated to your memory.  It really looks like some unholy merger of Gary Gannon, Ryan Verniere, and Brad Pitt.

Eventually I did figure out how to put some clothes on him.  But then I clicked next and went to portrait selection, where I chose this.

And then I accepted my portrait, not having read the key paragraph in the patch notes:

Whoops!  I guess I won’t be able to go back and change anything.  Or even prove that I put clothes on him.

Fortunately, I was doing this with a test character and not my main.

The full body avatar creation tool is interesting. You can grab and tweak features pretty readily, though how visible these adjustments are with you in-game avatar I couldn’t say.

I am surprised at the limited options for clothing.  Maybe the Caldari are just boring dressers or something, but the selection was pretty limited.

Not that it matters that much I suppose.  Once you’ve created your full clothed (or unclothed if you prefer) body, I am not sure you can even see it again as things stand at the moment.

I have already seen people in local who accepted their portraits not knowing they would be stuck with what they chose.