Potshot dropped me a note suggesting that we check out World of Tanks, which recently started its North American open beta.  It has been almost a year since this title first hove into view.

As with his post about the game, the short version here is that I like it so far.

You’ll note the title of this post however.  There really isn’t currently a “world” in World of Tanks, not anymore than there was a world in Battlefield 2 (the last Battlefield game I bought) or, if you want a more analogous Free to Play title, Battlefield Heroes.

The persistent part of the game, the MMO-ish aspect of it, is that you earn experience and credit for battles which allow you to research and purchase new equipment, repair and restock your current inventory, as well as train and recruit crew members for your tanks.  All of this takes place in your garage and barracks.  When you’re ready, you indicate you are ready for battle and off you go.

While the game is a bit twitch based, and certainly knowing how to move and use cover is entirely up to the player, your tank has a crew and their experience also plays into how well your tank performs.  Different tanks have different numbers of crew members, but in general the key figures are the commander, the driver, and the gunner.

The commander’s skill helps you spot enemy units.  A skilled driver can help you get through terrain and keep the tank moving under adverse conditions.  And, of course, the gunner aims the main armament.  You get to fire the gun.

You can aim the gun yourself if you want, but it is often better to designate a target and let your gunner handle the aim while you try to keep general situational awareness.  Right click on an enemy unit you’ve spotted and the gunner starts tracking the gun on it.  Left click fires the gun.  There are visual indicators on the targeting reticule that let you know how solid the aim is at the current target.  Often it is best to wait, take a breath while the aim is optimized, then let fly.

Of course it you, your target, or both are in motion, shots tend to go wide of the mark.  Firing on the move doesn’t get many hits.  Laying low in cover and letting the enemy come to you generally yields a better percentage.

You start off with three tanks in your garage, the tier 1 starting tanks for the US, German, and Soviet trees.  Research you earn on one tree can’t be used for another, and the same goes for the paths within a give national tree. 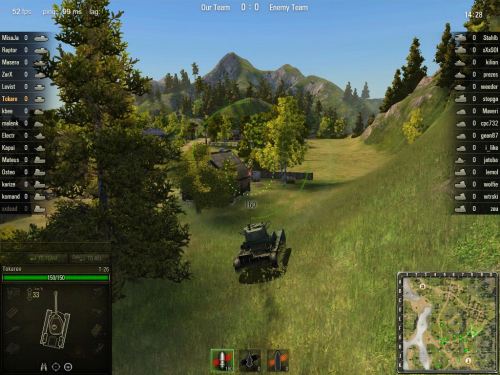 But from the initial tank I could have gone the tank destroyer route, the self-propelled artillery route, or the medium tank route.  Because, as it turns out, the T-26 leads to the heavy tank path with the KV-1 and eventually the big JS models further on. 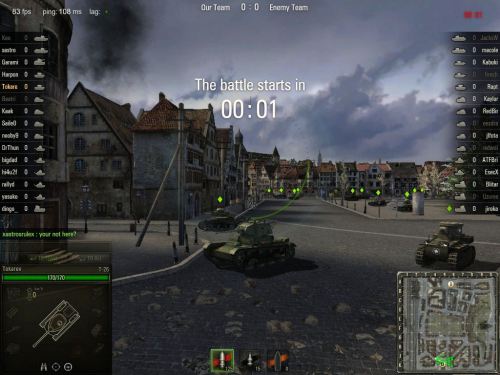 My T-26 waiting for the battle to start

I actually moved a bit too quickly up the tree for my own skill.

Battles are 15 vs. 15 affairs on a variety of urban and open maps, and one of the things that WoT does well is put together an even battle.  When you’re a tier 1 or 2 tank, you are usually in battles with mostly those tiers, the occasional tier 3 tanks being put in to fill out a battle.

And those early battles with lightly armed and armored vehicles are a lot of fun.  But if you don’t learn the lessons of tank warfare from them, moving up tiers quickly can be a shock.  I rushed to a third tier tank, which made me king of the hill when I got pushed into a battle with mostly tier 1 and 2 players, but I also ended up as often in higher tier battles.  But the user base tends towards a an odd column shape, with a large base of T1 and T2 players that rapidly tapers off, then suddenly grows wider at the top. 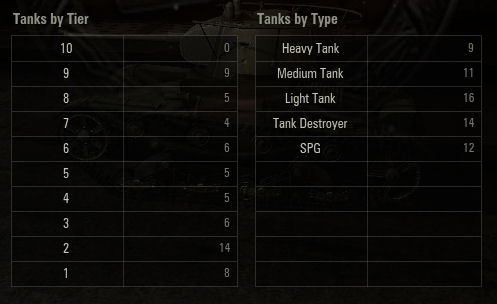 Tanks currently queued up for battle

If you’re in the middle, you get stuck in with one end or the other.  I found myself in a tier 3 light tank amongst some much bigger vehicles.  If you’ve only been in the light tank battles, you’ll be in for a shock.  A light tank has a role in amongst the heavies, but it isn’t laying in wait and firing.  You have to get out and spot for your heavier team mates, and you have to stay in motion constantly, as just about anything on the battlefield can put you down in one hit.

And you are stuck spotting for a while, because while you earn more in battles with higher tiers, research costs take a big spike

I decided that if I was going to go into that environment, I was going to go in via the faster medium tanks.  So I backed down to the initial Soviet model again until I earned enough research points to get into the BT-2 tank, a model that is very fast.

BT-2 in the garage

I also invested in a well trained gunner.  In the light tank battles I do well, but I need to start working on how to scout for the heavies before I go to the next tank in the tree, the BT-7.  I am actually ready for that skill wise, but once I buy it, I’ll be dumped into some higher level battles.

Battles themselves are more in the vein of CounterStrike rather than the Battlefield series.  You have one life per battle.  If you get knocked out, you’re done.  This nicely discourages silly behavior.

Battles end in one of three ways.  If one side runs out of tanks, everybody gets knocked out, the other side wins, battle over.  This is the way most of the light tank battles seem to end.  Fortunately, if you get knocked out early, you can right click to see how your team is doing by watching the game from their viewpoint.

My own post-game stats

If one side occupies the opposing side’s initial base, a white circle (with an Christmas tree in the middle, of all things), for a sufficient period, they win.  This means there is some need for defense.  I’ve seen battles lost because everybody went forward and one enemy player slipped by and nobody could get back to him in time.  I’ve also seen both sides sitting on each others bases.

Finally, there is a 15 minute timer on battles.  If the timer runs out, the battle is, as I read it, a draw.  I have yet to see a battle that made it to the timer. 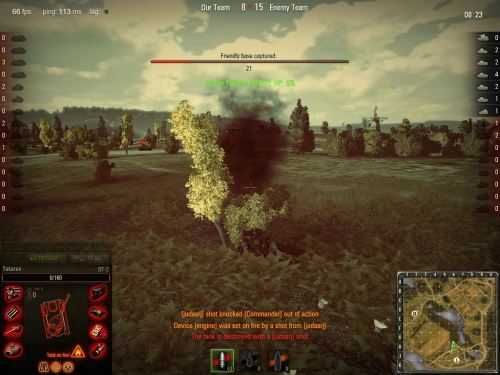 Timer, base capture, and all tanks dead visible in one shot

The game itself appears to be really, legitimately in open beta.

By this I mean that they aren’t doing what EA or SOE or Facebook games have been doing, which is claim to be in beta but take money all the same.

Not that you cannot see how they plan to finance things through their cash shop.  There are two currencies, the gold one clearly being the one that you’ll pay for with real world money.  And there are things that are only available with gold; more space in your garage, fully trained crew members, some special vehicles, and premium account access. 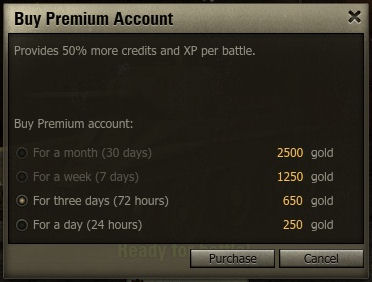 You need premium access to form groups (platoons) that let you and your friends join battles together and it sounds like the clan (guild) features will require it as well, at least for the leader.

But for the open beta they are handing out some gold to players on a daily basis and the button that lets you buy gold is disabled.

When it does go live I can see myself investing a bit of cash into the game.

Finally, I suppose I should mention *why* I like the game.

Certainly, before I discovered Tolkien, I had an obsession with history in general and WWII in particular.  So I like the period and I like the vehicles they have chosen from the period.

Second, I used to be a big Desert Combat player, but I always favored the armor maps.  On the ground I was never very good, but I was tough to beat in a tank and did very well in a BMP or a Bradley.  World or Tanks is all tanks, all the time.

Third, it looks really good.  You can tell it isn’t really an MMO because you can’t turn off the UI and take decent screen shots.  But the tanks are rendered very well and the scenery is quite good.

Fourth, destructible terrain.  You can bowl your tank through fences, trees, houses, barns, parked cars, light posts, and the like. There is one map where I make it a point to run down this one outhouse every single time I play it.

Finally, the game plays well and you can play it in small chunks of time.  You can pick it up, play a battle or two, then go on your way in less than 30 minutes.

There are, of course, things that need to be done in the game.

Finding and chatting with friends is pretty primitive.  Potshot and I have managed to find and put each other on our respective friend’s list, but the whole thing is pretty low key and feels tacked on.  Also, you can only access chat with your friend’s list outside of battle, and since you probably spend most of your time in battle, you might never actually get in sync.

Needing to be premium to form a group to play together is a bit of a downer.  I could see that for permanent groupings, guilds/clans, but for temporary that seems a bit much.  Still, at least we figured that out, as opposed to our adventures in Battlefield Heroes.

Map rotation could use a boost.  There seems to be a wide variety of maps, both urban and open country, yet I seem to draw the same three maps about 80% of the time.

There also needs to be a bit more to the game than just simple matches.  As fun as they can be, it can be tough to get invested in fighting a 15 vs. 15 battle over and over again, even if the maps swap a little more reliably.  It sounds like they have that in the plan, but right now it is just simple matches.

And I have to get myself a better mouse to play World of Tanks.  Being a bit twitch based, the old Kensington trackball is sub-optimal.  Any suggestions on a decent gaming mouse?  I don’t need more (and probably couldn’t keep track of more) than 6 buttons.

But for a distraction from the fantasy MMORPG genre, which has been my staple for… well, I hate to think how long if you include MUDs… it serves quite well.  I will be interested to see how it develops.

13 thoughts on “Battleground of Tanks”