It looks like the low level armor quests are in for my two characters, a bard and an enchanter, as well as for Potshot’s paladin and druid.  So for much of this week we have put off the experience grind in favor of completing these quests, each of which give you a full set of armor and a weapon when done.

Seeking out these items is a bit of a scavenger hunt.

For example, to wrap up the bard armor quest in Qeynos, the Wind Spirits Armor quest line, you end up with quite a list of  items to obtain, which seem to fall into three categories.

There is the raw element needed for all of the recipes.  For the bard it is this:

These drop off of gnolls in and around Blackburrow, so are easy enough to find, though they are a pain to accumulate as they weigh 15 lbs. and cause you to become encumbered after picking up only one or two.

There there are the standard vendor items that you can pick up around town at any time.  Again, for the bard quest these are.

And then there is the Scavenger Hunt.  These items all drop off of mobs.  Some of them you can find at vendors in the area, having been sold for coin by people who did not need them, while others are flagged as No Drop and thus have to be looted from the mob in question by you personally.

The No Drop items seem to be spread out so that each recipe has one, so you cannot work completely from the vendors in your area.

Via some aggressive shopping (I covered all the vendors in West Karana, North Karana, and East Karana), and only a bit of mob camping, I have been able to make two bracers, the boots, and the breast plate for Tistann.  The armor is… bright emerald green.

The nice thing though is that, when you make the chest item for your quest, you also get offered the quest for the weapon that goes with the set, which in my case was the Wind Spirits Longsword.

That sword might be one of the best looking I have seen so far in the game.

The design is simple and functional, taking the form of a katana.

I am somewhat stuck on the coyote skull, the young puma skin, and the giant fire beetle carapace, none of which I have seen anywhere.  And then there is the diseased wolf pelt, which seems to drop quite regularly off of rabid wolves in Qeynos Hills, only they are a pretty rare spawn.  I count myself lucky to have gotten one so far.

The Qeynos armor quest for my enchanter, the Arcane Order Armor, has a likewise long list of items to obtain.  The magic users, magicians, enchanters, and wizards all get the same quest.  It is no wonder nobody can tell them apart on site. 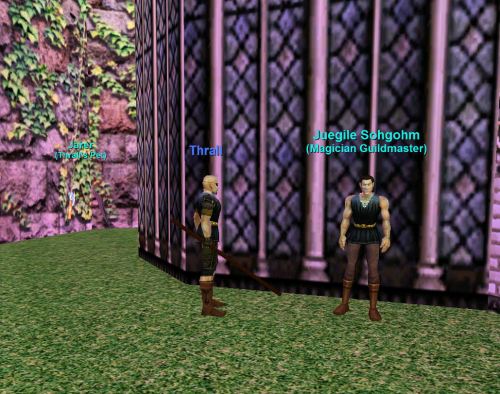 Thrall looking for some clothes

For Thrall’s quests, the basic item for each recipe is:

Those are easy enough to find hunting spiders out in West Karana.

And the vendor items… well… they make more sense than perhaps some of the bard items.  An arrow and a bottle?  Really?

And then, again, there is the Scavenger Hunt:

There is that giant fire beetle carapace again, and a rabid wolf pelt, which I am going to guess also only drops from rabid wolves in Qeynos Hills.  And then there is the medium quality bear skin, which Potshot also needs, and which does not appear to be a drop or vendor trash, but a crafted item.

Tistann had one of those as well, the low quality bear skin, but I managed to find one of those by searching all of the tailoring vendors.  We shall see if luck strike again in that regard.  If not, Thrall may have to take up tailoring, which will mean that Tistann might have to continue on with smithing since you need skinning knives to work on hides.

So far I have not been able to complete any of the recipes for Thrall, so he has no new armor to show off.  But I suspect Potshot and I will spend some time this weekend trying to outfit our team.