And in the grand tradition of MMOs of the last few years, they have some Pre-Order options.

But when you are a free-to-play game with a revenue model based on selling an in-game currency to buy upgrades and special vehicles, what do you sell as pre-order incentives?  Gold and even more special vehicles!

World of Tanks Pre-Orders Take Off

Pre-Purchase Gold for Special Price and Get the Unique Tank for Free!

London, UK – March 24, 2011 – Wargaming.net is glad to announce that the pre-orders are now open for its highly anticipated free-to-play MMO action game World of Tanks. Players can select from one-of-three exclusive pre-order packages: Heavy, Medium and Light. Players purchasing the World of Tanks pre-order package till April 12, will gain access to gold available for a limited-time special price and one of the unique tanks. These exclusive tanks are one-of-a-kind vehicles, each of them possessing unique powers that will allow their owners to benefit from the very first battles.

Pre-Orders are available for American and European clusters and feature the following benefits:

Pre-order gold is on average 10% off the release price

Here is the chart that is on the North American Pre-order page, which reflects what is written above, but have details on the actual exclusive tanks. 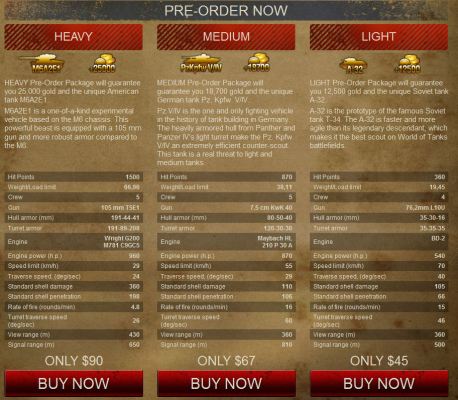 Is extra in-game currency and a unique (and seemingly very powerful for its class) tank a better incentive than the usual pre-order incentive?  Is that better than, say, a free beginner’s mount in Rift?  It sure seems better than that Glass of Aglaral did in Lord of the Rings Online. (And yes, they changed the cool down and duration on it later.  But at launch? Yuck!) I am not sure that this offer is up to my Constitution class ship in Star Trek Online though. 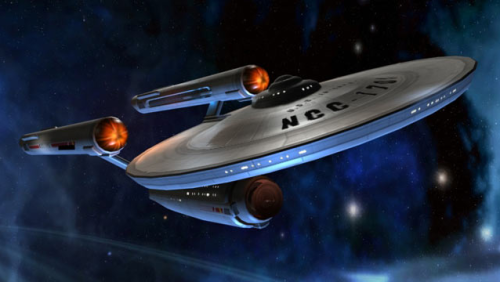 Perhaps the best pre-order item ever...

Flying that ship might have been the best part of the game for me, but there was some emotional investment involved in all of that.

This offer also gives some insight into how much the in-game currency for World of Tanks is going to cost.  If the price on the chart is around 10% off of retail, it should be somewhere around a half a cent (US$) per gold, if I calculate right. (Math done in my head carries no guarantees.)

I thought, given a screen shot I was sent, that World of Tanks was going to be available in a box for sale on store shelves.  That may come yet.  But the pre-order appears to be only for those set to download the client for free.

2 thoughts on “World of Tanks has a Pre-Order Plan”