As I mentioned back in March, our old TV was dead, kaput.

But we did keep to the timeline laid out.  A new TV was purchased that Friday.

The shopping process started off exactly the way I feared it might.  My wife, my mother (who was in town for a visit), and I went to Costco to stare at the TVs they had on display, a process that quickly lead to indecision.

After some time, my wife started calling around to other places while we stood at Costco, mesmerized by an array of large screens and potential features.  She found that a nearby Target had a Samsung model that was discontinued and marked down.

This ended up being a 46″ unit, which had been marked down to $600.  This turned out to be a boon for us, as it saved us from one of the pitfalls of television purchasing.  The rule, as I am told, is that you should figure out what size TV you think you need, and then buy the unit that is one size up from that. 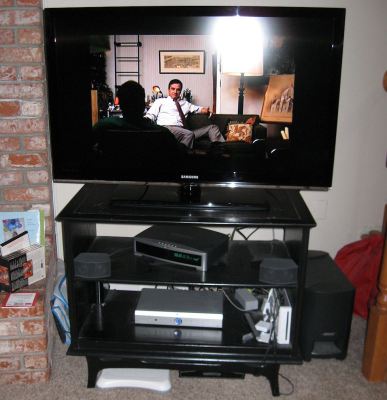 It fit into the space and actually gave us a viewing area in 4:3 mode, of 35″ diagonal, making it effectively bigger than our old set.

And once I got all the other pieces hooked up, things looked pretty good.

The DVD Player upconverts and hooks into the TV via HDMI, so our movies look good.  I got a component video cable for the Wii, so it is playing at the highest resolution it can.  And the DirecTV box… well, it only has S-Video and composite video output, and the TV doesn’t do S-Video, so we are kind of in the worst possible case on that front.

But everything was fine and we were satisfied… for about two days.

By Sunday my wife was asking about what it would take to upgrade DirecTV to HD. (A new dish, a new receiver, and more money.)

Meanwhile, I was feeling disatisfaction with the Wii.  It’s 480p output was fine on the old TV, but when you want to stream NetFlix though it, you start wishing for a bit higher definition.

Of course, I wouldn’t mind seeing Blu-Ray on the new set.

And, after sorting through options, it looks like the next item on the wish list is a Blu-Ray capable device.  That seems to get us the most bang for the buck.  You can find a Blu-Ray player with built-in wireless and the ability to stream NetFlix in the $200 range.

But once I got into that price range I started looking at the Sony PlayStation 3.  For $80 more you can get the PS3 with the 160GB drive which does Blu-Ray and streaming and plays games at 1080p.  The problem there is that you have to start piling on extras.  It only comes with a single controller, so you have to get another one right away.  And it you want PlayStation Move, that is more still.  Then there are the games, which run $60 a pop.  And frankly, aside from the LEGO games, I am not sure if there is anything that compelling on the PS3.

So the PlayStation 3 ends up being a chunk of change, depending on how far we take things.

Is there anything really compelling about the PlayStation 3 that I am missing?  Or should I stick with Blu-Ray player that can stream NetFlix?

Meanwhile, I am tempted to spend a few bucks on an antenna just to see how good the local stations look sucking the signal out of the air.