Having settled ourselves on the shores of Lake Rathetear, it was time to see if we could hunt there successfully.  Our goal was to get to level 19.

We decided to hit the gnolls and undead that guard the area that leads to South Karana. 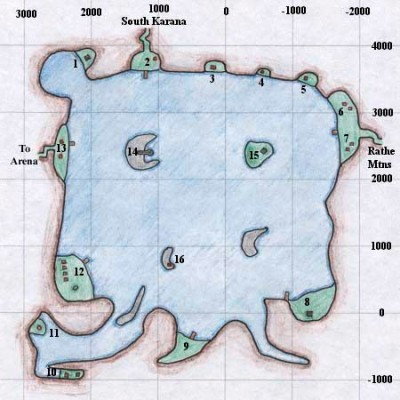 (Map, as usual, from the EQ Atlas archive.)

Getting there meant a swim of course. 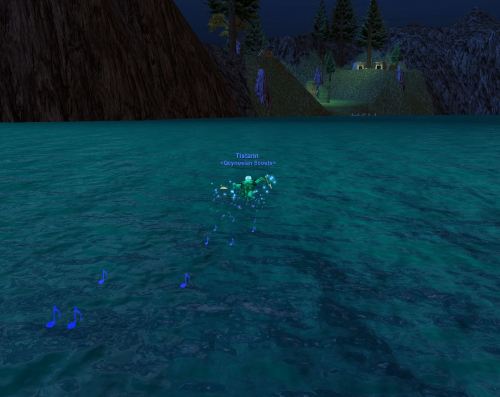 Swimming to our target

Once there, we got ourselves together on the ledge overlooking the gnoll encampment, did our various buff, and generally made a plan. 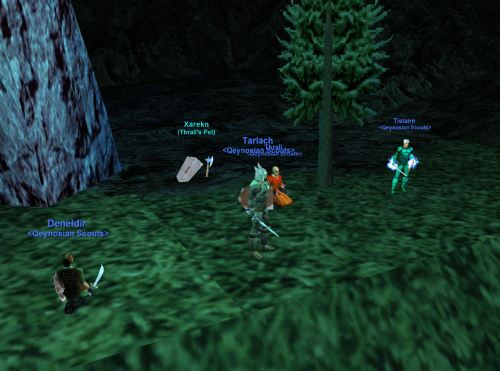 Down below us was a single gnoll, two groups of two gnolls each, and one group of four gnolls.  The gnolls were a mix of guards and shaman.  They were all at least a level or two below us, as they all con’d blue to us, so the experience was so-so, but they respawn rate was generally fast enough that we rarely had to touch the group of four.

When the sun went down though, the respawns turned to undead, which were much more lucrative for experience, as they usually con’d at our level or above, though some of the plain skeletons still con’d blue. 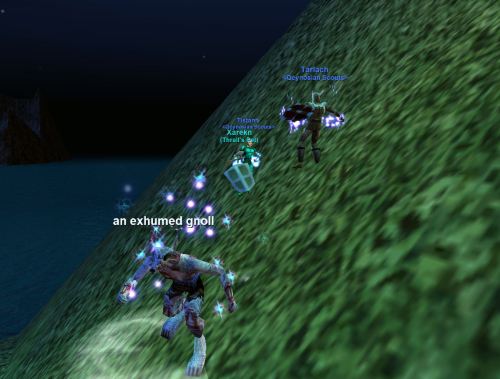 The only unfortunate part was that, in the 72 minute representation of the 24 hour day/night cycle in EverQuest, undead only seemed to spawn from 8pm to 5am, or about 27 of minutes.  So we spent most of our time grinding slowly through gnolls waiting for the sun to go down.

Eventually though, we started hitting 19, one by one.  When hitting 19, a little pop-up gave us advice on where to hunt next.

Of course, South Karana was just steps away.  However, the most lucrative spot for us, the Aviak tree house, was heavily camped when we got on.  But as the night dragged on and we faced another stretch of gnolls after three of us had already hit 19, we decided to head into South Karana to see if we could speed things up a bit.  We were also all encumbered with drops, so the centaur camp and its vendor was on our list of destinations.

It was late, past 11pm Pacific, and the Aviaks appeared to be at peace, so we were able to dive in for a bit and clear out those on the ground around the base of the tree house. 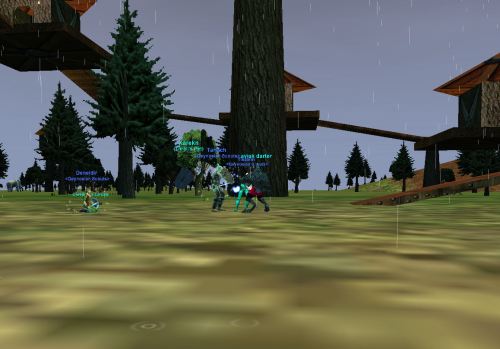 However, our burdens were hurting our ability to fight.  Deneldir was slowed to walking speed when not buffed.  So we decided to head toward the vendor, taking targets of opportunity as we moved. 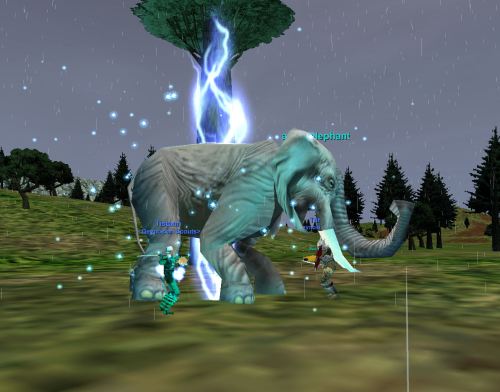 After we relieved ourselves of our excess mass at the vendor, we decided to head into North Karana.  Though we did okay in Lake Rathetear, we decided to head to Odus and Kerra Island for our next round, which meant heading first back to Qeynos.  North Karana is along the way.  We figured that we could get Deneldir his last few percentage to level there. 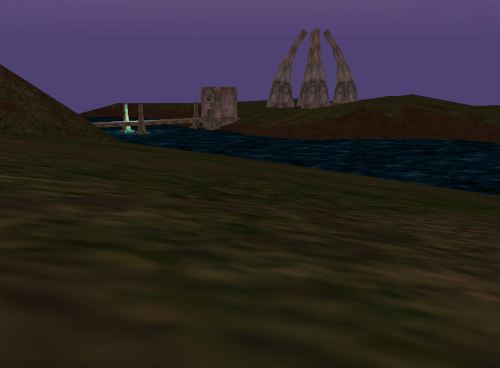 The familiar bridge in sight

That actually took much longer than I thought it would.  There is a gap in levels in the zone, with hill giants, griffons, and griffenes still conning red to us, but most everything else in the zone showing up as gray.  There were a few blue con mobs, high level beetles and griffawns, and a couple of runs around the zone finally got Deneldir his level.  The group was all level 19.

It was nearly midnight at that point, so we camped at the gypsy camp which, while not exactly safe, is still safer than the bridge is for Tistann.  He seems to be persona non-grata with the followers of Rodcet Nife, a priest of which is in the bridge tower.  He’s attacked me before.

The next morning I ran my guys back to Qeynos across West Karana.  Again, another odd experience, as the zone was almost all gray to my guys at 19, but I knew that there were still a couple of mobs out there I had to fear.  I even found a couple that were still worth killing for experience. 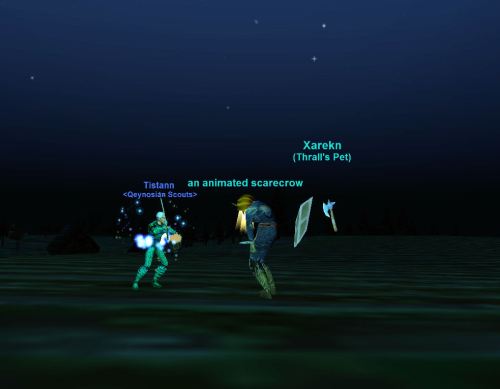 I cleared the field of scarecrows and continued on, eventually spotting the warm glow of the West Karana towers, something very home-like and familiar.  Then it was through to Qeynos, where I bound my guys on the dock so that they were be ready to travel to Odus later on. 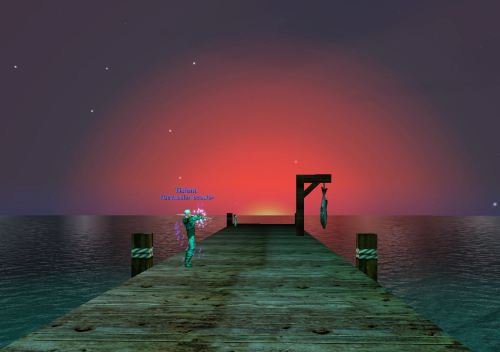 Sunset on the Qeynos Docks

Next time, adventures on Kerra Island.