One goal of the evening was to make it to Kerra Island to see how that looked as a place for our drive to level 20.  That meant first taking the boat from Qeynos Harbor to Erudin.

Still on that dock

The boat, however, has issues.

Really.  On Saturday the boat, called the Siren’s Bane or some such, was represented by a guy swimming.  Regular departures or not, I was not going to climb on his back.  Later, on Sunday afternoon, the boat appeared to be back and in actual boat form.  I happened on it at the island in Erud’s Crossing.  However, when it took off, it sailed straight through the island, wiping me off on the landscape.

Again, the whole boat thing has been in since 1999 and they still can’t make it work right.  WTF?

Anyway, the gnomish translocators were still on the docks, ready to zap people from Qeynos to Erud’s Crossing, then to Erudin, and back again if anybody so desired.

And so we made it to Erudin, a city ahead of its time!

Qeynos and Velious? What is this Velious?

The city is bright and clean and as confusing as the day I first stepped into it.  The team that designed it was really into teleporters as a method of travel.

If you look at the full size picture above, that great big blue thing between the two stairs, the thing that looks like a huge blue pill (and don’t you wish you had taken the blue pill?), that is a teleporter.  There are many like it in town.  Sometimes stepping on them will take you where you want to go… sometimes they won’t… but there are no signs on them that indicate where they might take you.

I honestly never spent much time in Erudin or anywhere on the Isle of Odus.  There was never much to draw me there except the occasional spell that was only sold there or in Freeport.  And maybe the library.

What do you mean, "High City?"

My impressions from back in 1999… reinforced by what I have seen here on Fippy Darkpaw, is that you roll and Erudite and then you get the hell off the island as fast as you possibly can.  It is one of those places that is fine to be from.

So with that in mind, I have to admit I was very surprised to find that Toxxulia Forest had gotten a graphical re-work. 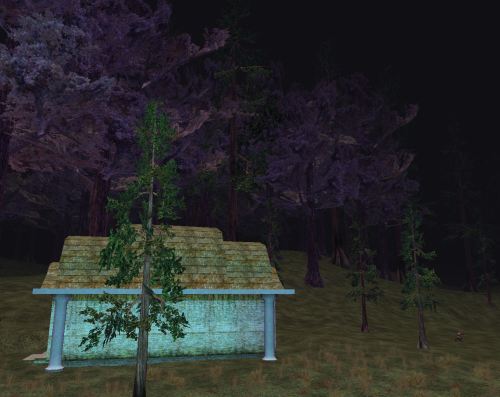 Right, I mean, I get redoing the Commonlands and lumping that into one zone.  Who hasn’t been there?  And the Desert of Ro, totally understandable.  And even Freeport, because it sits there in the middle of those two.  But Toxx forest?

If you retexture a forest and nobody is there to see it, does it really look better?

The only thing I can imagine is that either somebody at SOE just loves this place, or it happens to use the same textures as some other new or redone zone, so they thought, “what the hell?”

I see this as part of the vast conspiracy against Qeynos.

Anyway, there is a shiny new gateway into Toxx.

And there is even a spiffy new portal into Paineel, the necromancer city that everybody in Erudin pretends does not exist.

Though, once you get inside, the place still looks like a miniature golf course. 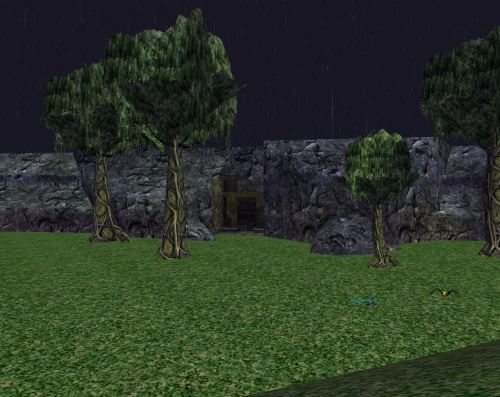 Hitting the undead rat is a 1 stroke penalty

And, along with reworking the graphics for Toxxulia Forest, they also merged it with the zone for Kerra Island, which I might have mentioned was our destination before I got side tracked with the boat problems, the improbable city of the Erudites, and the blatant unfairness of Toxxulia Forest getting a graphical make over.  I will try to get back on topic.

You might recognize the Kerran’s, the cat race from EverQuest II.  In Original EverQuest, the playable cat race was the Val-Shir, who apparently were all wiped out when the moon Luclin exploded.  In EverQuest the Kerrans were just mobs, targets, loot and experience pinatas. 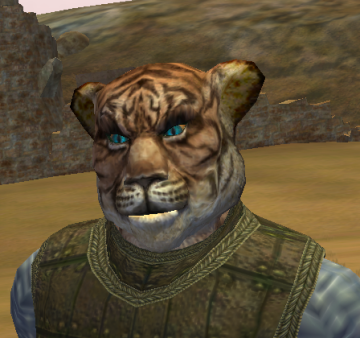 I was a what back in EverQuest?

And there was a whole island of them, just waiting to be whacked.  So that was our destination… which yes, I know, I mentioned way back at the top and have since displayed 9 pictures, none of which has one of these cat people in it.

So here is a Kerran.

The Kerrans are a friendly people.  They viewed our group amiably when we arrived.

The Kerrans are an odd race.  They have titles from Arabic sources, but tend to wield medieval Japanese weapons.

Dwarves do, however, keep goats as pets.  So the pattern holds there.

Anyway, when I scouted Kerra Island previously with Vikund, everything con’d red.  But he was level 9 at the time, so it was hard to get a read on what the place was really like since, as we all remember, red means a mob is anywhere from 3 to 97 levels above you.

But when we showed up at level 19, the happy Kerran welcoming committee that awaited us con’d green and gray.  Not so good.

In scouting around, we found some blue con natives further in and even some even or yellow con Kerrans in caves in the back.  But the ones in caves seemed to be bunched up and it looked like we might get 5 or so at a pull, which is the sort of thing that turns ugly fast.

And then we found our way to Tiger Island.  An island on an island that is part of an even bigger island?  Why not! 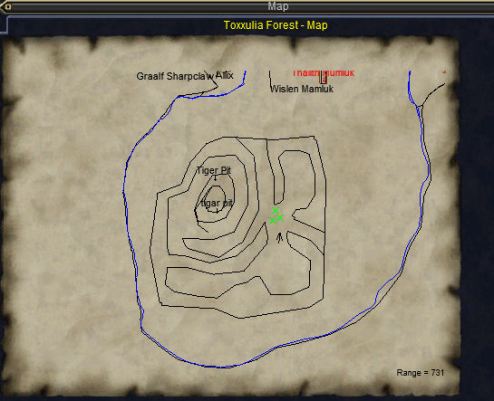 Tiger Island had the advantage of having a number of yellow con mobs on it that were all conveniently spread just far enough apart that nobody got any silly ideas about assisting one another.

And so the slaughter began. 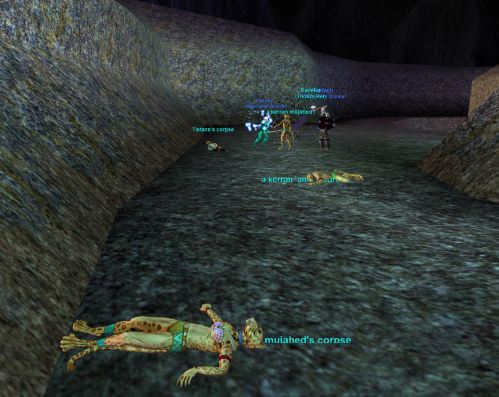 One of the odd things about Kerra Island is that, despite being an island in somewhat open water, it is always dark and gloomy there.  I wonder why a bunch of cat people who look like African or South American breeds and who have Arabic titles didn’t choose some place with some more sun.  This is, no doubt, a side effect of joining Kerra Island with the Toxxulia Forest zone, which has a permanent dark gloom over it.  Appropriate for a forest, not so much for an island where the natives dress like it is the tropics.

While the spawn rate was a bit slow, we could clear the whole island before it repopped, the experience was good and the down time gave us a few moments to chat, explore, or use the bathroom. 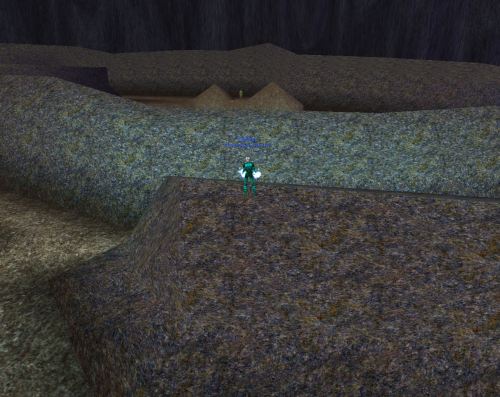 Hey, the guy in the middle popped!

The guy in the middle, who you can see in the picture above, has a respawn timer that is faster than anything else on Tiger Island.  Since he is also the highest level guy on the island, that was good for us, once we figure it out.  Plus he is also the guy who give the island its name.  He keeps pet tigers.

And they assist him in battle.  I am not sure that they are really “wild” tigers, seeing as they live with the cat people who seem to groom them, provide them shelter, and keep them fed on wandering strangers.  They were the only aggro mobs on Kerra Island when we arrived.

And they are also one of the best looking models I have seen in the game.  Nice tiger!

The tiger’s have a bit of a pathing probelm.  The live in this pit and seem to be able to attack you through the ground if you get too close to the pit.  And, of course, you cannot hit them back.  You have to lead them around to the ramp out of the pit before you can come to grips with them.

And so we felled Kerra and their pets (they also keep pumas) for a couple of hours.  While they were amiable towards us when we arrived, they were glowering at us dubiously when Deneldir, the last of us to make it, hit level 20.

We got through the evening with only a single death.  You can see Tistann’s corpse in one of the pictures.  Things got out of hand on a repop and we ended up testing Deneldir’s Lesser Succor spell, which transports the group to a safe spot near the zone line.  We apparently got lucky that it pulled the whole group out on the first go, as experiments with it later showed that one of the hazards of the spell is that sometimes people get left behind.

In the end though, the whole group made it to level 20 with some tiny shred of Kerran goodwill still remaining, as they had not yet gone totally aggro on us. 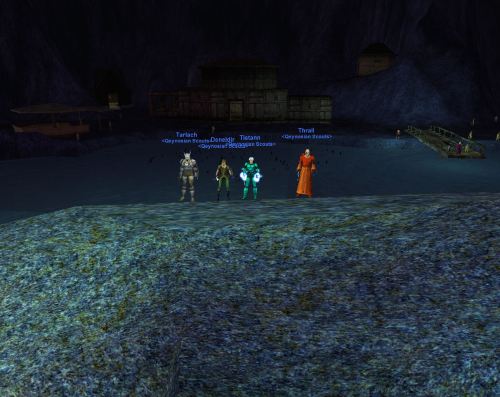 The Group at Level 20

Having worn out our welcome on Kerra Island, we are now in search of a place to adventure and gain experience.  A return to South Karana might be in store for us, or maybe a peek into Runnyeye Citidel.  We will have to see how crowded things are.

5 thoughts on “It Is Always Night on Kerra Island”