With the transition of the instance group to a new game, everybody is in the process of establishing their role in the new order of things in EverQuest II.

We started with our characters, shaking out into the roles of tank, healer, and a variety of not necessarily DPS classes. (Okay, the wizard is totally DPS, but the troubadour and the swashbuckler have more tricks in their portfolio than a Swiss Army knife.)

After character classes, we started talking about trade skills.  Trade skills can be very useful in EQ2, and some of them feel almost indispensable to any regular group or guild.

Not all of us will pursue trade skills, given the variability of play time across the group.  But a couple of us will, and with Meclin joining us for the ride and an alt or two in play, we can probably count on covering at least 4 of the crafting trades in game.

But which ones should we go after in a serious way?  Which ones will benefit the team the most? 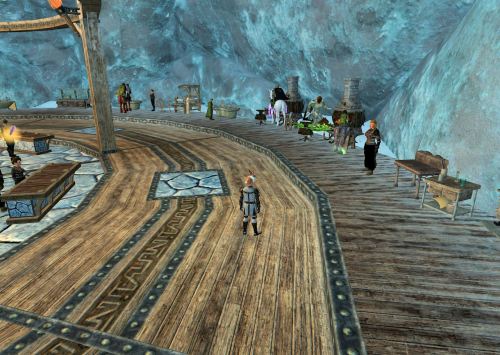 Which craft to choose?

There are nine major crafts in the game, and a character can learn only one.  So while Potshot muses about harvesting materials for trade skills, I am trying to figure out what we should be trying to make.

This is complicated by the Station Cash (SC) Store, something new in the mix of things in EverQuest II Extended.  Some of the crafts compete directly with the store while others have the market to themselves.

The trade skill choices are divided into three categories for reasons of symmetry I would guess.  A couple seem to overlap and one sticks out as different than the rest, but when you force things into groups you’re always going to end up with one of those “and everything that was left” categories.

The trade skill divisions are:

Woodworker – Makes totems, small shields, bows, arrows, other wooden weapons, and gets confused with the carpenter a lot.

Outfitters – Makers of player equipment… unless it is made from wood… or is considered jewelry.

Tailor – Makes cloth and leather armor, plus bags, quivers, and other ammo pouches for ranged weapons.

Weaponsmith – Makes all metal weapons like swords, daggers, and axes.

Alchemist – Makes skill upgrades for fighters along with poisons, buffs, and the closest thing to a healing potion in EQ2, which frankly isn’t that close at all.

Jeweler – Makes skill upgrades for scouts along with items for all of the non-armor spots including rings, necklaces, earrings, and, oddly enough, belts.

My temptation is to try and get people to cover all of the scholar professions to cover the making of player skills and spells.  It is easy to forget, coming from WoW, that skills have various quality levels.  The skill tiers have been renamed since I last crafted heavily in EQ2 (and what hasn’t been renamed or reworked heavily in EQ2 by now?), but they are now ranked:

The apprentice skill is what you get for free as you level up.  You don’t even have to visit a guild master or anything.  However, life starts getting tough with only apprentice skills somewhere in the mid-20s and I hear that beyond 70 or so life with such skills becomes near impossible.

So keeping the group out of the apprentice doldrums has an appeal.  On the other hand, I’ve been down the skill creation path before and the free flowing adept skills can crush you if you are not careful.

Still, having those skills upgrades on hand would be good.

At this point I have sent Campell down the path as a jeweler.  That will keep him and Cerredwyn good on skills as well as having all the jewelry slots covered.

Cerredwyn has expressed a desire to try carpentry, so we may have housing decor and boxes.

But what other trade skills should we try to pursue as a group?

I am also tempted to copy over one of my characters from Crushbone.  I have an alchemist and a woodworker that are both up in the 70s skill wise.  And with SOE having dropped the price of a copy by $10 and that half-price Station Cash I just bought, the price of copying one character seems fairly reasonable.

First though, we need to figure out what we want  to do and what we really need.