There is, in fact, a quest that has you herd cats.  Well, you put leashes on them and lead them across a glacier, so it isn’t quite herding.  But my experience with every cat I’ve ever known is once a leash goes on, they start immediately walking backwards.

Some of you know what I mean.

They will do a lot of things if you leave the leash on them for a while, but letting you lead them placidly is not on the list.

And don’t even think about a leash for these guys

But the real herd of cats was us as we tried to keep ourselves coordinated following the quest line through the Frostfang Sea.

World of Warcraft has spoiled us a bit and we are having to learn to make do without as much immediately accessible data.

For example, we have grown used to mousing over a mob or harvestable item and getting a info balloon that lets us know that we need said item for a quest, the quest for which we need it, and if we need more than one of the item, how many we need and how many we have already, plus that last line of information for everybody in the group.

That allows the whole group to be aware that an individual has not gotten and update, or has not killed all the ice bears required, or has not harvested that last ice beet.

On the last rolling stone

So those of us in the group who tend to obsess over who has gotten all of their ice beets were left to more primitive means, which did not always pan out… especially with tundra beets and bear poop.

The ice beet harvesting quest has one of those UI quirks that makes me fume.  It begins presenting data in a standard fashion, but changes format at the last tundra beet.  So the quest guide in your peripheral vision on the right hand side of your screen updates as follows. (This is an approximation, not a literal transcription, but it gets the point across.)

I have now done this quest four times, and every single time I do it when the quest guide switches from numbers to text I mentally mark the quest done and fail to collect the last tundra beet. 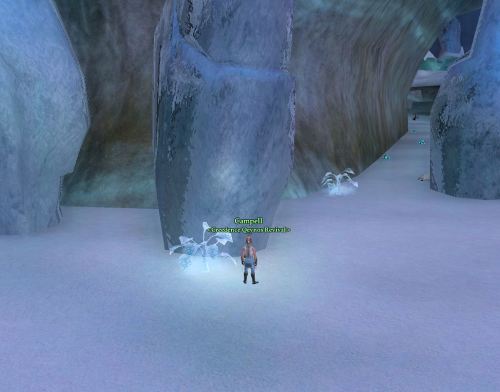 Actually, I remembered about the tundra beet quirk before I ran back to the quest giver, and I made sure to tell everybody else about it, so we did not foul up the tundra beets.  However, there are a couple of other quests that do the same thing, so we ended up with the group out of sync a few times.  We would do the three parallel quests that seem to be the standard at the start of Frostfang Sea, and everybody would finish two of them, so everybody would run back to the quest hub and have something to turn in, but inevitably, it seemed, a quest went uncompleted.

This was usually discovered only after we moved on to the next item and somebody realized that they didn’t have a quest for the things that everybody else in the group seemed to be slaying.  Then we would double back and try to get everybody back in sync, though once we ended up having to backtrack a few quests because the person in quest got a few quests ahead in one line and so being out of sync was fine until all the quests for the group failed to line up. 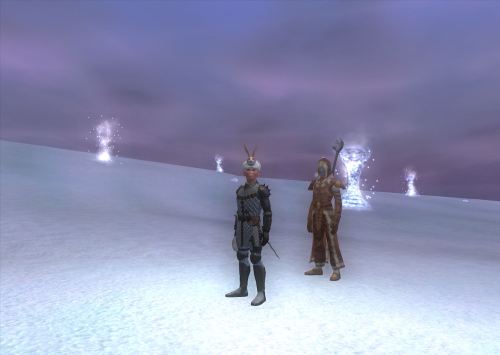 In the snow, out of sync

Not the worst system imaginable.  All the data is there for you, if a bit awkwardly laid out.

But I would be really happy if somebody on the EQ2 team went over and copied how LOTRO does group status in its quest log. (There, I didn’t even say, “Go copy WoW!”  But if they wanted to, I’d be good with that as well.)

Fortunately, we were not in a hurry to accomplish anything in particular.  This was the second night of EQ2 orientation, and we were all learning (or relearning) how things work in the game and what we need to keep an eye on.

The only real goal of the night was to form a guild.

Of course, it was that last bit that took longer than almost anything else.

Despite Potshot and I throwing around potential guild names for almost a week in advance, picking the actual name followed the usual pattern.  We began tossing names around and rejecting them until people grew tired enough to lower their standards.  The key here is to keep the name you really want to yourself until you sense that standards are beginning to waver.

Unfortunately for me, I sprang my own pet name, “Koyaanisqatsi Now!” too soon.

And so we ended up with the name Creedence Qeynos Revival. 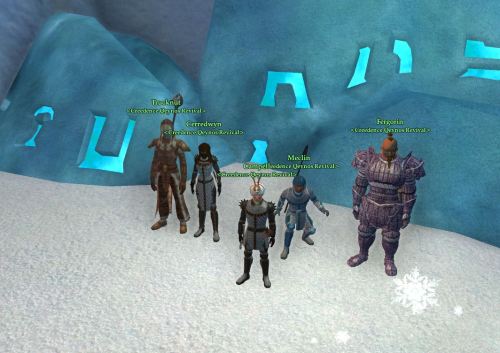 There’s a bathroom on the right

(Those under age 30 might need to go here to understand the  guild name reference.  For the joke in the caption, you are on your own.)

One interesting note.  While you need a full group, six characters, in order to create a guild, guild creation is not canceled if one of the group members declines to join the guild.  Trucknut declined at the moment of guild creation for some reason, but the guild was created anyway.

We also went over collection quests, status item drops and where to turn them in to help level the guild, and AA experience slider bar.

So as far as the Frostfang Sea quest line went, we did not make a huge amount of progress.  We essentially moved from the quest hub on the shore by the raft to the quest hub in the cave.  If you’ve done the quest line, you know what I mean.  If you have not, well, we’re about one third of the way through, with the whole group ending up at level 11 or 12.

But since was more or a “training and explaining” evening, we were not expecting a lot of progress.  Plus Earl could not make it on with us (I logged on another account for the six member of the group at guild creation) so we did not want to get too far ahead.

Next time we should be able to bash through the remainder of the Frostfang Sea quest line.  We all want the mount you get at the end.

And then there will be the question of where to go after that.

The Frostfang Sea quest line sends you to Butcherblock, but I am wondering if we shouldn’t start looking into some more dungeon-like group content.  Maybe Stormhold over in Antonica.  There is a series of quests for it both in Qeynos and inside the zone itself, and the encounters are all tuned for groups.

Plus I haven’t been in there at level since early 2005.